Seoul selections: the top things to do in the South Korean capital 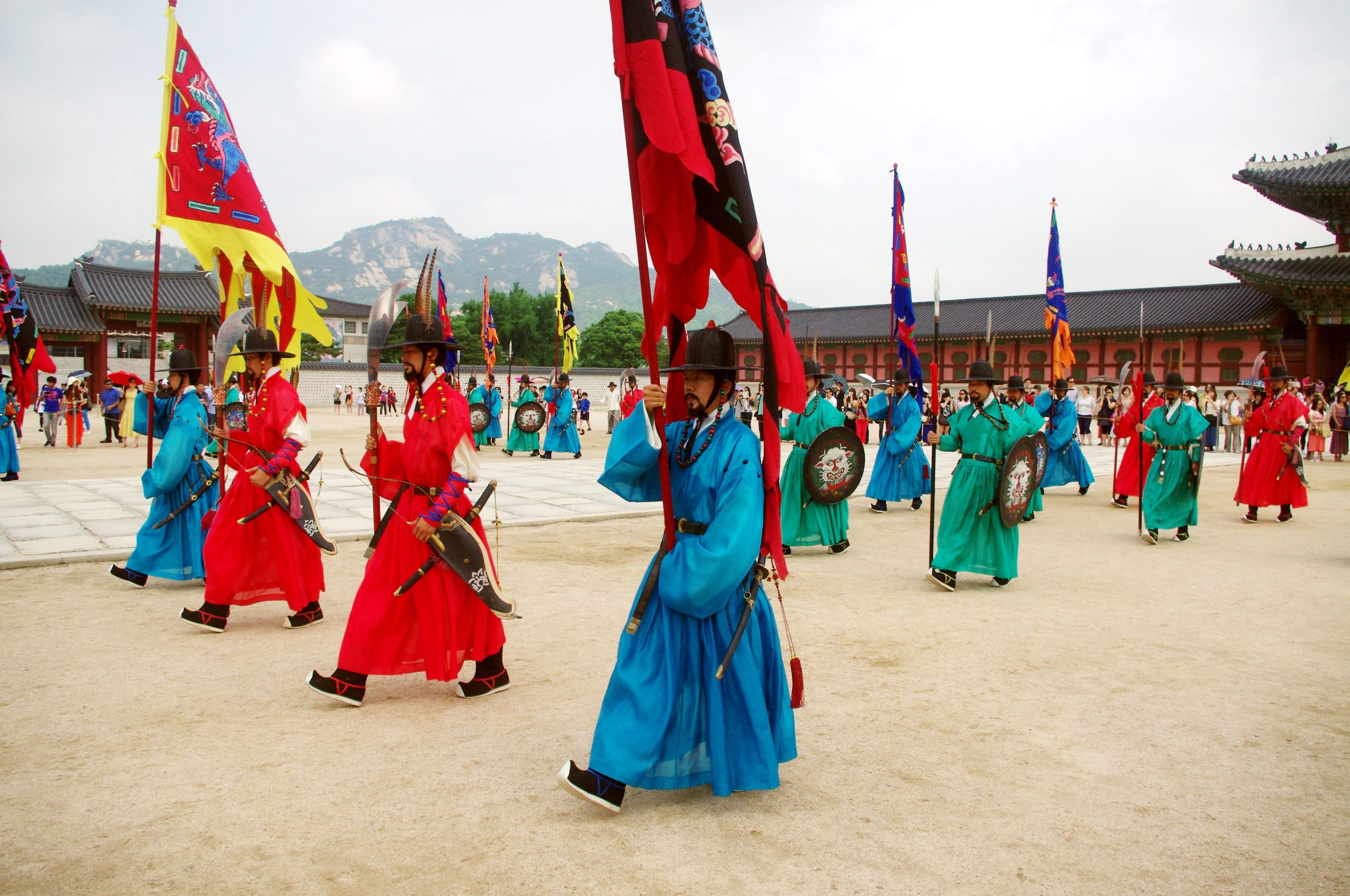 Whether you want to see the latest K-pop sensation, take a late-night food and drink tour, or find serenity in a spa or temple, South Korea’s capital has something to offer 24/7. Here are the best things to do in Seoul.

Street food in Seoul is beloved for its spice, variety and affordability, and there’s no better place to try it than at Gwangjang Market. Dating from the early 20th century, this covered market has gained a reputation among foodies for having some of the country’s best street snacks.

Start with an order of tteokbokki (stir-fried rice cakes in a bright orange spicy sauce), followed by a couple of mandu (Korean dumplings) and a pajeon (savory green onion pancake). For dessert, try hotteok (a pancake filled with brown sugar and cinnamon) or bungeoppang (a fish-shaped pastry filled with sweet red bean paste). Then do it all over again.

Step back in time at Gyeongbokgung Palace

If you only have time to see one sight in Seoul, make it the splendid architecture, serene pagodas and maze-like grounds of Gyeongbokgung Palace. Originally built during the reign of the powerful Joseon Dynasty in the 14th century, the palace was destroyed during the 16th-century Imjin War, then rebuilt in the 18th century. Gyeongbokgung is the largest and most elegant of Seoul’s five royal palaces.

Take in the ceremonial changing of the Royal Guard in front of the massive Gwanghwamun Gate before strolling the grounds to admire striking hip-and-gable buildings, tranquil ponds and delicate cherry trees. Wrap up your visit with a stop at the National Folk Museum of Korea, which sits on the palace grounds and features exhibits on traditional Korean culture.

Stroll along the Cheong-gye-cheon Stream

In the heat of summer, nothing beats a walk along Cheong-gye-cheon Stream. A dazzling oasis that unfurls for nearly 11km (7 miles) through the towers of central Seoul, this picturesque waterway is lined with walking paths, trees and bridges. The original stream was covered with an elevated highway after the Korean War, but in 2005 the city undertook an urban-renewal project to refresh the area and reintroduce the stream, better than ever. Since then, it’s been a popular spot for locals and tourists looking to cool off or take a leisurely break from the city’s hustle and bustle.

Shop for the latest trends in Myeong-dong

You’ll want to break out the credit card for an afternoon of spending in Seoul’s most famous shopping district. Myeong-dong is renowned for trendy fashion labels, deluxe department stores and cosmetic boutiques packed with famed K-beauty products. Once you’ve sufficiently stocked up on mask sheets and moisturizer at Olive Young, innisfree and Etude House, check out the Myeong-dong Night Market for quirky souvenirs and traditional street food.

The area is also home to some of Seoul’s cutest cafes, with the Pink Pool Cafe at the Stylenanda Pink Hotel flagship store being the ultimate eye candy. This confectionery-colored spot has an ice-cream-parlor vibe, indoor ornamental pool and sweet-as-sugar art decor, making it a popular place for photo shoots.

Go for a dip in a jjimjilbang

More than just a way to get clean, bathing in Seoul is a full-fledged social activity. Koreans gather at bathhouses (jjimjilbang) with friends and family typically once a week. Jjimjilbang can range from an establishment with just a couple of small dipping pools to massive aquatic palaces with multiple pools, water features, cafes, saunas, relaxation rooms, gyms, spas and arcades.

First-timers should know that bathhouse etiquette requires bathing in the nude, and some bathhouses don’t allow patrons with tattoos. Once you’ve bared it all, take a dip in the hot and cold pools, followed by a stretch in the sauna, then opt for a traditional full-body scrub to emerge baby soft from your bathhouse experience.

Dragon Hill Spa is known for its wide array of unique relaxation areas, such as a meditation pyramid and a “jade energy” room, while the female-only Spa Lei draws patrons for its elegant atmosphere and invigorating massages.

Bukhansan National Park is listed in the Guinness Book of World Records as “the most visited national park per unit area” – which is easy to understand, since it’s set within the city limits and easily reachable by public transportation. You’ll often see athletic Koreans in colorful hiking gear riding the subways on weekends.

Bukhansan covers 80 sq km (31 sq miles) and features jagged peaks, hiking trails, dozens of storied temples and 1300 species of plants and animals. The 5-hour round-trip hike to the 836m (2744ft) summit of Bukhansan is well worth it to see Seoul spread out before you in all directions.

Belt it out in a noraebang

Walk down any busy street in the university districts on a Friday or Saturday night and you’re likely to hear distant singing wafting through the air. Chances are it’s not an errant K-Pop band but the raucous merriment of karaoke at a noraebang (singing room). This popular late-night activity involves private rooms with big-screen TVs, phone-book-sized lists of songs and even disco balls or musical instruments to accompany the singalong. Top it off with room service bringing snacks and cocktails and it’s a recipe for potentially terrible singing … and a great time.

Sip on soju and makgeolli

The traditional Korean beverages soju and makgeolli have been respectively distilled and brewed since the 13th century and are the most beloved drinks in this thirsty nation. Soju also has the surprising distinction of being the world’s best-selling spirit, perhaps helped out by the fact that a standard bottle often costs less than a bottle of water.

While such upmarket small-batch distilleries as Samhae Soju and Hangang Brewery create artisanal varieties, the most common labels such as Jinro and Seoul Makgeolli can be happily imbibed at the picnic tables dotting sidewalks outside of convenience stores across the city. Those new to the Korean alcohol scene can check out the Sool Company, which offers tasting tours, brewing classes and special events.

The iconic image of a colossal Buddha statue looking over sleek high-rises can be seen at the 8th-century Bongeun-sa Temple in Gangnam. Although most tourists come just to snap a photo or two, you can actually participate in temple life with the monks. Over a weekend, join in vegetarian meals, morning chanting, meditation and even the 108 daily prostrations, all meant to clear the mind and bring you closer to achieving inner peace. Temple-stay programs are offered not only at Bongeun-sa, but at various temples throughout Seoul.

You’re probably familiar with Hollywood’s Walk of Fame, but did you know Seoul’s glamorous Gangnam district has its own boulevard dedicated entirely to K-pop artists? Instead of stars on the sidewalk, K-Star Road features 3m-tall statues of cartoon bears called GangnamDols, each decorated to represent a different K-pop singer or band, including Super Junior, Girls’ Generation and BTS.

After taking a few selfies with your favorite bears, pop into the GangnamDol Haus near the Apgujeong Rodeo subway station to pick up a few mini bears as souvenirs.

While the village has cafes, teahouses, museums and boutiques, it’s also home to a handful of hanoks-turned-guesthouses where visitors can sleep on traditional ondol heated floors, walk through kimchi pot–filled courtyards and generally get a taste what life was like in old Seoul.

Get a bird’s-eye view at N Seoul Tower

At the top of Nam Mountain sits N Seoul Tower, a broadcasting structure dating from 1969 and rising 239m (784ft) into the sky above the city. The tower still has active transmission antennas, though today it’s better known for an observation deck that offers 360-degree views of the capital. The top of the tower also offers a few dining options, including a swanky rotating restaurant serving French fare. To reach the tower itself, you can ride the Namsan Cable Car aerial tramway or hike the meandering trails to the top through Namsan Park.

Take a day trip to the DMZ

One of the top day trips from Seoul, a visit to the northern border may well be the most unusual 24 hours you’ll spend on the Korean peninsula. The 250km (160-mile) border between North and South known as the Demilitarized Zone (DMZ) is one of the world’s most closely guarded borders.

Various outfits such as the popular DMZ Tours company take curious onlookers from central Seoul to the border area to catch a glimpse into North Korea from Dora Observatory, explore the Third Infiltration Tunnel (originally dug by North Korean soldiers) and even step into North Korea in the Joint Security Area. There’s also the touristy DMZ Peace Train operated by KORAIL, which whisks passengers from Seoul Station to Dorasan Station, the last stop to the north before crossing into the Hermit Kingdom.