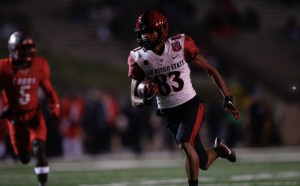 San Diego State had few problems against New Mexico Friday, outside of the frosty weather, winning their last road game of the season 34-10.

The Lobos (2-9), losers of eight straight, remain winless in Mountain West play while the Aztecs improved to 7-4, 5-2 in the conference.

Despite the 30-degree Albuquerque chill at game time, wide receiver Mekhi Shaw came out hot, with six catches for two touchdowns and 120 yards, including a 51-yard reception for SDSU’s first score of the game.

The Lobos answered quickly, tying the game 7-7 while moving the ball on the ground. Head coach Brady Hoke told San Diego Sports 760 “we were a little soft on inside, alignment-wise we hurt ourselves.”

The Aztecs made the adjustment though, and after New Mexico ran for 84 yards in the first quarter, from the second quarter on, they limited the Lobos to just 13 yards rushing.

The second touchdown for Shaw, a Scripps Ranch High alum, on a 30-yard pass from Jalen Mayden, came nearing the close of the first half, giving the Aztecs an 11-point lead.

Madison High alum Kenan Christon – on his way to finishing with 102 yards on 10 carries – added a 49-yard run for a touchdown in the third quarter, while Jack Browning had two field goals, of 30 and 46 yards.

Shaw has increasingly been a target since Mayden took over as quarterback last month. Hoke said simply of turning to Shaw, “he’s earned it.”

SDSU plays its final game of the regular season at 6 p.m. Nov. 26, welcoming Air Force to Snapdragon Stadium. Air Force is 7-3 (3-3 in MW) heading into Saturday’s game against Colorado State.