Pass for a local in Tenerife with these insider tips 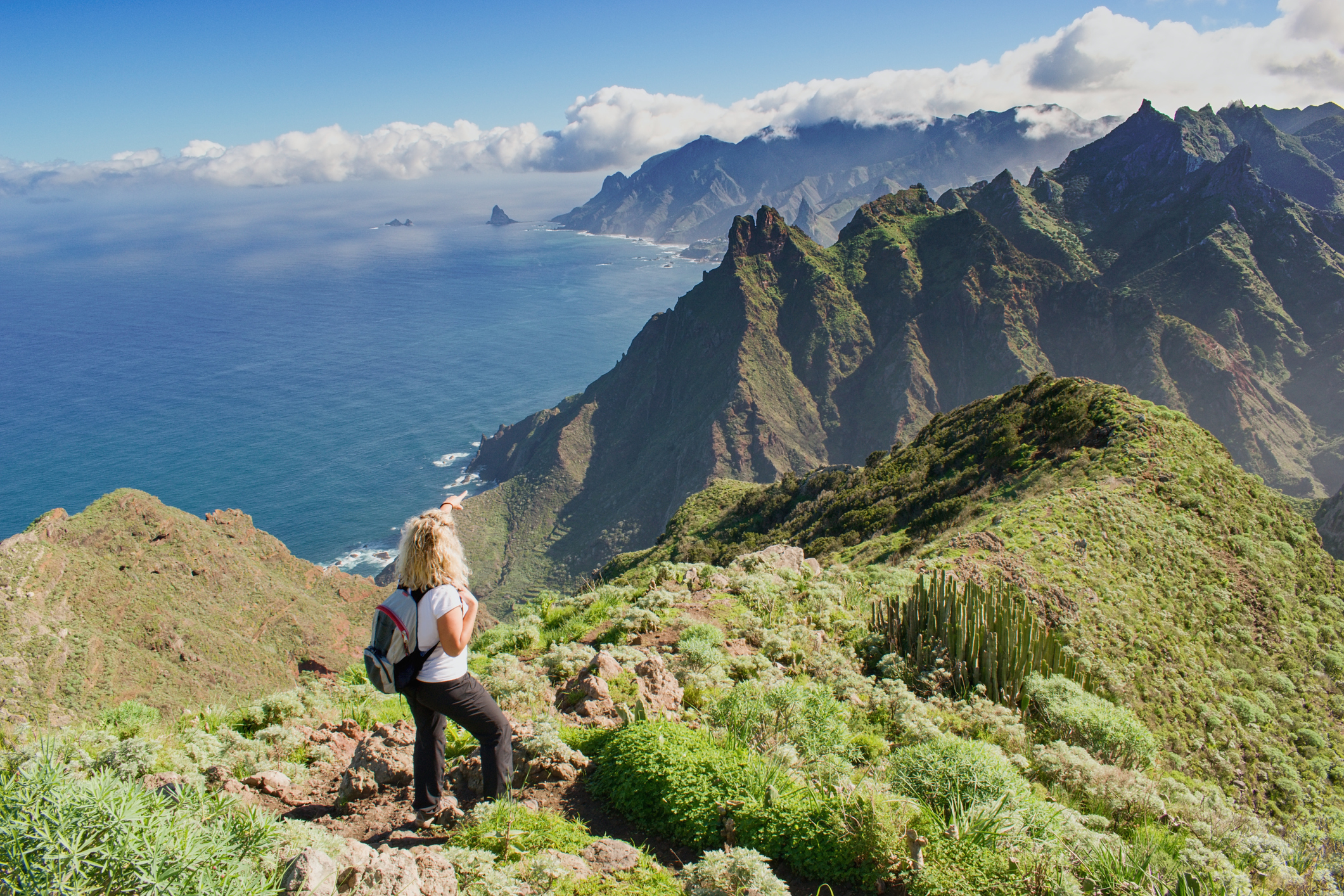 You’ll need a good few days to truly explore this deliciously diverse island. Book all the essentials, from hiking permits to Michelin-star dining, well ahead – this is, after all, one of Europe’s favorite vacation playgrounds. Here’s everything you need to know for an unforgettable stay on Tenerife, the Canary Islands’ beloved grand dame.

Squeeze every moment out of your next vacation with tips and tricks from Lonely Planet in our weekly newsletter delivered to your inbox.

Come in February for Carnaval, winter for sunny skies or spring for hiking

Tenerife’s big festival blowout is its three-week Carnaval – a nonstop, sequin-clad, Caribbean-influenced celebration that takes over the buzzy capital Santa Cruz de Tenerife each February. Hailed as one of Spain’s greatest carnivals, it’s an unmissable show, but expect soaring accommodation and flight prices. Be sure to book everything well ahead!

The warm winter months from December to February are the high season for northern Europeans seeking sunshine, while the hot summer (June to September) is a popular time for Spanish vacationers, particularly in August. The in-between months of October and November are usually quieter and cooler – around 25°C (77°F) on the coast – with good deals on accommodations, and there’s wonderful hiking through fields of spring wildflowers from March to May.

Tenerife’s top natural thrill is the chance to summit Spain’s tallest peak, 3718m (12,198ft) El Teide, located at the heart of the lunar-like Parque Nacional del Teide. The key thing to be aware of is that you’ll need a pre-booked permit to hike up to El Teide’s summit. Only 200 permits are issued each day, and hikers snap them up months in advance, so reserve as far ahead as possible.

To help with conservation efforts, two other standout hikes, the Barranco de Masca and the Barranco del Infierno (both following spectacular gorges in western Tenerife), also require permits. If you don’t manage to get one, the island has many other rewarding walking trails, from lesser-known routes through the haunting beauty of Teide National Park to paths through lush cloud forests in the Anaga mountains of northeast Tenerife.

Choose places to stay near the things you want to see

Though it’s possible to explore the island in a few days, choosing the right place to stay in Tenerife is key. The winding roads can unexpectedly tack hours onto driving times, so it’s worth being based close to the can’t-miss sights and attractions on your travel list.

The north coast is best for getting away from it all, with accommodations mostly in small towns dotted along the Atlantic shoreline. Elegant Garachico, for example, has two delicious boutique hotels in restored Canarian mansions: Hotel San Roque and La Quinta Roja.

Hikers will love the remote, pastel-painted villages of the Anaga mountains in the northeast, with their eerily beautiful cloud forests and independent accommodations. And anyone looking for a touch of urban buzz should consider Santa Cruz, where cultural delights include the boldly designed Tenerife Espacio de las Artes and Santiago Calatrava’s wave-shaped Auditorio de Tenerife. Alternatively, consider historic La Laguna, where La Laguna Gran Hotel brings a stylish touch to a centuries-old home.

Sunny southwest Tenerife is the preserve of top-end resorts bursting with facilities, many of which have a strong focus on sustainability. Near surfing-oriented El Médano, Casas Bioclimáticas ITER is a smart and innovative collection of carbon-free self-catering houses and villas, powered by solar and wind energy and designed by Tenerife’s Instituto Tecnológico y de Energías Renovables.

The Canary Islands comprise a unique and fragile natural environment, but the roads are often congested, and car rental is pricey because of limited availability, especially in the peak season. With a little planning, you can rein in your carbon footprint by tapping into efficient guagua (bus) services across the island or renting an electric car.

The Titsa Ten+Movil app has a range of bus passes for easy island travel, and you can also buy single-journey tickets on the app. Otherwise, you’ll need cash for most buses. You don’t have to use a motor vehicle – exploring by cycling, hiking and kayaking is a delight (and perfect for viewing the dramatic Los Gigantes cliffs) and the capital is also best enjoyed on foot.

Book ahead for Tenerife’s best restaurants

Tenerife is making quite a name for itself on Spain’s gastronomic scene. Tempting offerings swing from fuss-free seafood shacks on the beach and vegan cafes packed with local produce to restaurants serving avant-garde tasting-menus, hidden away in romantic hotels. Reserve a table a few weeks in advance at the fanciest spots, such as Michelin-starred El Rincón de Juan Carlos in Caleta, run by the tinerfeño Padrón brothers, or Martín Berasategui’s M.B. at the Ritz-Carlton Abama, boasting two Michelin stars and headed by respected chef Erlantz Gorostiza.

With its two international airports and excellent ferry links, Tenerife is the main gateway to the three smaller, less-touristed western Canary Islands – bohemian La Gomera, lush La Palma and rustic El Hierro. Each of these makes a rewarding, slow-moving contrast to Tenerife and can be easily added on as a side trip.

When it comes to dress, anything goes on this soulful, sun-drenched island, but pack sunscreen, a hat and other protection from the strong rays. Plenty of people go topless on the beach, and lots of nudist strands are dotted around the island. That said, it’s respectful to cover up a little when you head away from the sand – so no bare chests in the town center!

Dress modestly when visiting religious buildings, such as churches or chapels. It’s also impolite to visit churches for tourism during religious services. For buildings that are only open for mass, stop in before the service starts.

One of Tenerife’s great joys is discovering the cultural wonderland beyond the Atlantic-washed coast, a sprawl of pastel-walled villages clinging to lush slopes covered in banana-palm plantations. Book a vineyard tour to learn all about the island’s wine-making scene, which revolves around local pre-phylloxera grape varieties and the hugely varied microclimates in these rich, volcanic mountainscapes. Most tinerfeño wine is consumed directly on the island, so sample freely while you’re here and show your support for local winemakers by taking home a bottle or three!

Close to Granadilla de Abona in southwest Tenerife, Bodega Frontos is a sustainably focused, family-run operation with more than 50 years of organic wine-making experience. Grapes are grown up to 1700m (5577ft), making this Europe’s most elevated winery.

Support local producers and craftworkers while in Tenerife

From herb-infused cosmetics to volcanic wines, Tenerife’s most inspired souvenirs revolve around one-of-a-kind gifts that support small-scale producers, independent shops and local island artisans. Start in lively Santa Cruz, where the fabulous TEA gift shop is a great spot to pick up creative pieces such as notebooks, prints and art books with a local twist.

Do your research on ethical whale-watching in Tenerife

Sprawling across 2000 sq km of Atlantic Ocean, Europe’s first Whale Heritage Site was established in 2021 off the coasts of Tenerife and its sister island La Gomera, highlighting how the Canary Islands are prioritizing responsible whale-watching. The islands’ famous underwater residents include bottlenose dolphins and short-finned pilot whales.

Before you come, read up on how to be a responsible wildlife tourist, and book your whale-watching trips ahead with a low-impact tour company that has a sustainable ethos and a focus on animal welfare. Led by a switched-on team of marine biologists, Biosean runs small-group expeditions that contribute important research on the local whale populations.

In recent years, legions of pebble or stone towers have popped up on beaches around Tenerife, particularly on Adeje’s Playa El Beril and Playa Jardín in Puerto de la Cruz, with people rushing to share images of the curious structures on social media. Local environmentalists are now campaigning for a ban on these manmade cairns because they disrupt natural coastal ecosystems and can be lethal to local wildlife such as insects, plants, reptiles and birds in a region already under pressure from tourism. Do your part by joining beach clean-ups and by leaving the rocks where they lie.

Pack for the endless array of Canarian microclimates

The Canary Islands are famous for their wonderfully varied microclimates, and nowhere channels this more spectacularly than Tenerife. You can be basking in the sun on a beach on the southwest coast and then an hour later be reaching for a jacket up in the misty mountains.

Pack for a range of temperatures and conditions, and factor in the weather when planning outdoor excursions, particularly high-altitude mountain hikes. Altitude sickness is a potential risk for anyone hiking above 2500m (8200ft), which includes El Teide; the vast majority of visitors have no problems, but take it slowly.

Be aware of natural dangers on the island

The eruption of the Cumbre Vieja volcano on the neighboring island of La Palma, which lasted 85 days in 2021, drew global attention to some of the natural challenges faced by the Canary Islands. As well as volcanic activity, limited rainfall can sometimes lead to forest fires during the summer months. In the unlikely event of an emergency, follow advice from local authorities including the Cabildo de Tenerife. There’s a single phone number for all emergencies, 112.

Watch out for rip tides when swimming on Tenerife’s beaches and in its natural pools. The Atlantic can have seriously strong currents, so it’s important to heed local advice; a red flag means it’s unsafe to enter the water. For the natural sea pools, it’s best to visit at low tide because high tides and turbulent weather can make them dangerous.

Most trips to Tenerife are entirely hassle-free, though like anywhere, petty theft can happen, particularly in bigger towns. Keep an eye on your belongings in tourist-heavy locations such as markets and bus stations and never leave valuables unattended on the beach.

The free European Health Insurance Card (EHIC) entitles all EU citizens to healthcare at local cost (which often means no cost) in other EU countries, including Spain. If you’re from a non-EU country, find out whether there’s any reciprocal medical care agreement with Spain; if not, ensure you have suitable health insurance or travel insurance cover.

Can you drink the tap water in Tenerife?

People in the Canary Islands tend to buy bottled water because much of the tap water here is desalinated sea water – it’s safe to drink but not particularly pleasant taste-wise. Some hotels and restaurants provide their own large water containers so you can refill reusable bottles, and Tenerife’s airports also have drinking fountains. As of April 2022, all bars and restaurants in Spain (including the Canaries) are legally required to offer free agua de grifo (tap water) for drinking.

The bizarre items that Britons take on holiday, including kettles, oven trays and TOASTERS