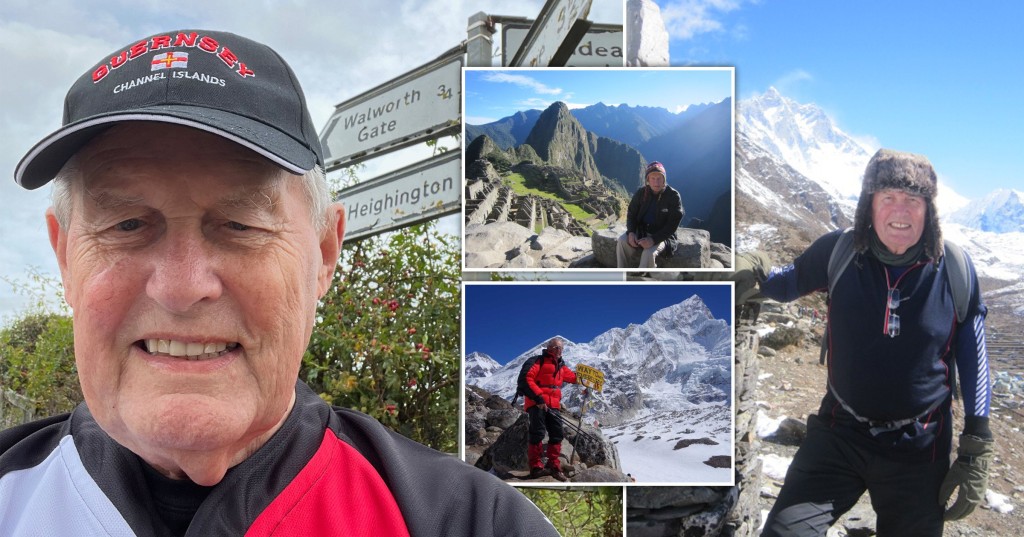 A 87-year-old great grandad whose been walking to the world’s circumference for years is on track to finish at 90 years old.

He’s a serial fundraiser and has been trekking almost 25,000 miles for five to six hours per day around England and Europe.

Brian Everett, from Darlington, Durham, started doing charity fundraising challenges after his wife Sheila’s death with breast cancer in 2004 – since then he’s raised over £200,000 for various causes.

First raising money for cancer research in tribute to Sheila, who used to be his partner-in-crime on adventures like visiting the Himalayas or trekking in the Annapurna Mountain range in Nepal, Brian has gone on to raise money for over a dozen charities by climbing mountains, tackling epic cycling journeys and running long distances.

His newest challenge, which he started in 2017, has seen him walking an average of 9.3 miles a day to reach his goal of 24,901 miles – this is equivalent to the equatorial circumference of the Earth.

This time, it’s all in support of the Alzheimer’s Society.

Brian began over 2,000 days ago and rarely takes a day off – even walking for several hours on Christmas Day.

Brian said: ‘It is a bit of a struggle, quite honestly, doing the remaining mileage. I think you just have to keep going.

‘It’s partially nice to have achieved it but it’s daunting to think that I’ve still got some way to go.

‘I thought this was something different. I started out with the idea of simulating a walk across America but then it developed out of that to walking around the world.’

Brian goes on two walks each morning and afternoon and said his family’s emotions about the challenge range from appreciation – mostly from the younger generations – to thinking he is mad.

‘I walk wherever I am. It varies but I can spend up to five or six hours a day walking,’ he said.

‘It’s the only way you can get the mileage in quite honestly, because I’ve been averaging 9.3 miles a day.

‘If I take a day off, I need to make up for it by walking double the distance the next day.

‘Walking for a few hours a day just becomes natural – I just hope I don’t pull a hamstring or something like that.’

For this challenge, he’s already raised £9,500 for charity, though he hopes to reach £20,000 fundraising target.

Brian began his challenges after his wife Sheila died aged 67.

They were an adventurous couple: ‘There’s a big gap in your life. It never goes away. It’s been 18 years but the gap is still there.

‘Obviously, when you’re doing things you used to do together, you miss your partner.’

After her death, he’s went to Morocco to trek and climb over the High Atlas Mountains, covering 180 miles in 10 days and roughly 14,000 feet – a challenge he completed aged 71.

In 2016, then aged 81, he climbed five active volcanoes on Mediterranean and Aeolian Islands in eight days.

He has also climbed to Everest’s base camp through the Andes in Peru, conquered Mount Kenya and Mount Kilimanjaro and been on adventures through the Amazon rainforest and up the Inca Trail.

There’s no stopping him, as he’s even cycled across the Pennines in under eight hours, along the Danube River for 1,000 miles in 14 days and from coast to coast in the UK from Workington to Whitby in three days.

Once his current feat is complete, he plans to find a new challenge.

He said: ‘I’ll just have to wait and see what opportunities arise.

‘I hope I will still be doing challenges. I just want to do something to keep the mind and body active, but there’s also the added bonus that the challenges help generate funds for charities.’


MORE : Someone offered to take granddad for pint after being turned away for being too old