Discover the best things to do in Dorset, from finding fossils to coastal hikes 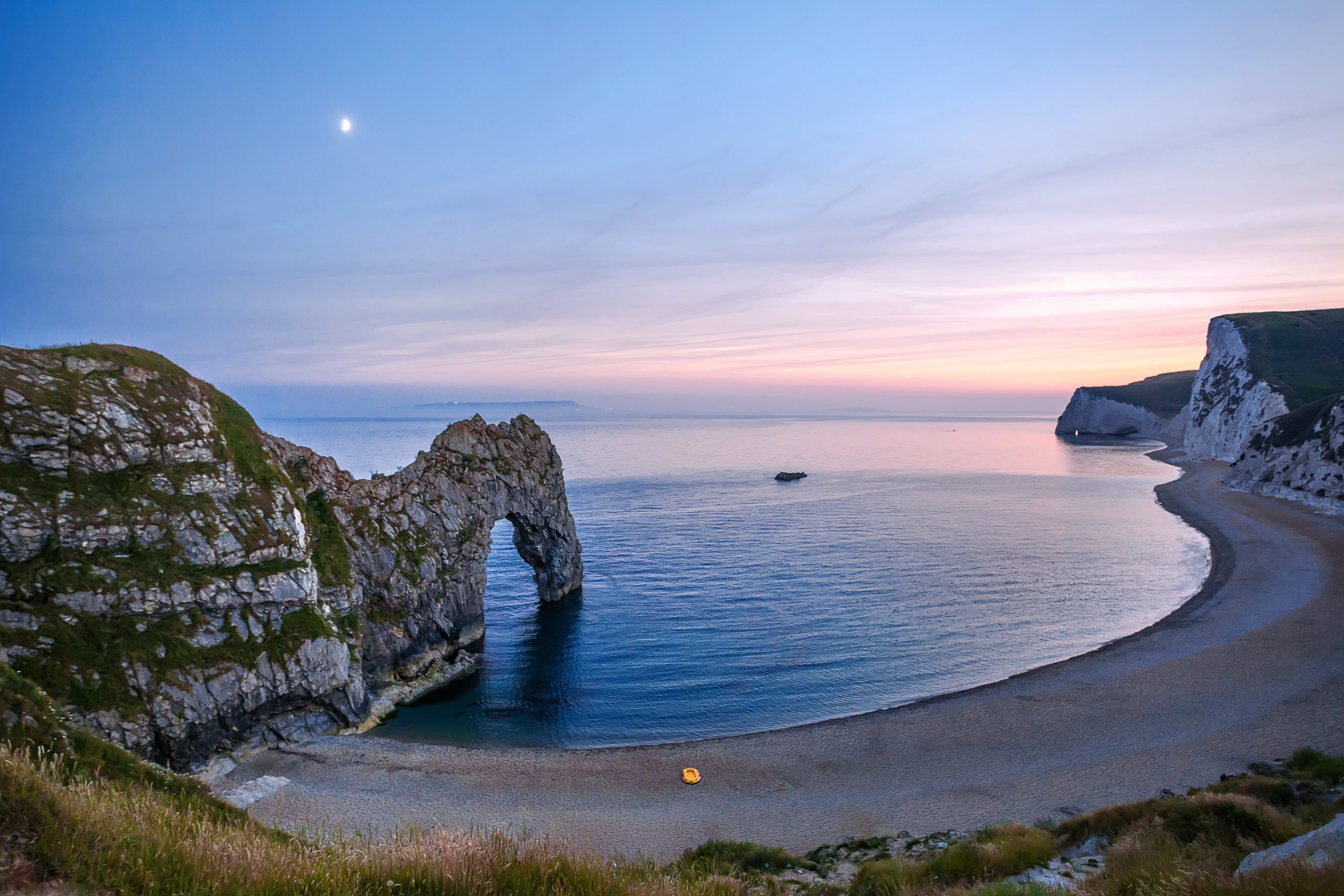 Home to some of the country’s best-loved beaches and one of England’s first seaside resorts, Dorset has long been a hit with British holidaymakers. But there’s far more to this charming coastal county than bucket-and-spade beach days and quaint fishing harbors.

Whether you’re in search of relaxation, adventure or a seamless blend of the two, there’s plenty to see and do in Dorset.

Those with even a passing interest in paleontology or geology – in fact, even those without – can’t help but be impressed by the dramatic scenery and fossil-ridden beaches of the Jurassic Coast. Thrill-seekers will find a wealth of experiences along the coastline, while hikers can tackle the rollercoaster cliff climbs of the South West Coast Path or venture into the scenic splendor of the county’s rural interior.

Dorset features the lion’s share of the 95-mile-long Jurassic Coast, a UNESCO World Heritage site famed for its fossil-rich cliffs and huge geological significance. All along the coastline, unusual rock formations reveal a visible record of millions of years of history, forming a living legacy that adds a unique touch to any cliff walk or beach day.

Durdle Door, a 200ft-tall (61m) rock archway over the sea, is probably the coast’s most famous attraction, and for good reason. This iconic sight really is a wonder, especially when viewed from the beach. Walk the long way down to the beach – through the amusingly named Scratchy Bottom – for a gentler descent that avoids (some of) the crowds.

It may be one of Dorset’s most popular beaches, but Bournemouth is still one of the best places for a day at the seaside. And with seven miles of soft sand to relax on, avoiding the summer crowds is easy. Locals head west towards Branksome Chine or east to Boscombe and Southbourne. At the far eastern end of the bay, the cliff-backed pebble beach at Hengistbury Head has a wilder feel and is often much quieter.

Step back in time at Corfe Castle

A peninsula once so cut off by moors and marshlands that it felt more like an island, hence the name, the Isle of Purbeck is one of the loveliest places to visit in Dorset. And at its center, the hilltop ruins of Corfe Castle provide unbeatable views of the surrounding countryside.

The thousand-year-old castle was largely destroyed during the English Civil War in 1646, leaving behind an evocative ruin. Corfe Castle is also believed to have been the inspiration for Kirran Castle in Enid Blyton’s beloved Famous Five books.

Ride the Waves on the Jurassic Coast

Adults searching for fun, adrenaline-pumping things to do along the Dorset coast will discover a myriad of watersports and boat trips. A RIB ride from Weymouth Harbour (Weymouth Bay RIB Charter) or Lyme Regis (Lyme Bay RIB Charter) offers a fast-paced tour of the coastline’s most impressive attractions; you can zip from Weymouth to Durdle Door and back in just over an hour. Dolphin and seal sightings are not uncommon, and the thrilling rides offer some of the best views of the Jurassic Coast.

Although she wasn’t taken as seriously as she should have been in her time, local paleontologist Mary Anning is now recognized as a crucial figure in the study of the Jurassic Coast’s fossils, which she collected on the beaches near her hometown of Lyme Regis. Today, fossil finds are still common, particularly on the stretch of beach between Lyme Regis and Charmouth.

The bases of the cliffs can be dangerous (landslides are not uncommon), so amateurs are advised to steer clear – and to pay attention to tide times, as high tide can cut off your return. Better yet, book a guided fossil hunting tour through the Lyme Regis Museum or Charmouth Heritage Centre.

Dorset’s Poole Harbour is one of the largest natural harbors in the world, home to yacht-filled marinas, sheltered bays for paddleboarding, and the famous Sandbanks peninsula, aka the world’s most expensive seaside resort. Take a boat tour of the harbor and its many islands, or hop on a ferry to explore the National Trust nature reserve at Brownsea Island. There are no public cars allowed, creating a peaceful setting that’s rich in wildlife.

Journey back in time on a beautifully restored heritage steam railway across the Purbeck countryside. Step on board at Norden Station to ride the rails as far as the seaside at Swanage, looking out for the view of Corfe Castle on the right-hand side of the train as you chug past.

Marking the eastern end of the Jurassic Coast, Old Harry Rocks are a series of chalk stacks stretching out into the English Channel. Thought to be named after an infamous local pirate, Harry Payne, the rocks were once part of the same chalk band as the Needles on the Isle of Wight.

While the headland above Old Harry Rocks has become a popular destination in recent years, the best way to see them is from the water. Join a kayaking tour with Fore/Adventure and paddle out across Studland Bay for a close-up view of the stacks, looking out for the resident seals as you go. Those in search of lesser-known spots in Dorset should head into the nearby Studland and Godlinston Heath Nature Reserve, home to a wealth of wildlife – including sand lizards and Dartford warblers – as well as the mysterious Agglestone Rock, an enormous orange boulder perched on a hilltop.

Wander the Gardens at Kingston Lacy

Immerse yourself in the extensive art and history collections of a 17th-century manor house, before a relaxing stroll through the scenic grounds. Perhaps the finest of Dorset’s numerous stately homes, Kingston Lacy sits on a vast 8500-acre (3440-hectare) estate. Wander the grounds and gardens, especially the attractive Japanese Garden. Pro tip: try to visit during spring, when the estate’s woodlands are filled with bluebells.

Monkey Around at Monkey World

One of southwest England’s most family-friendly days out, Monkey World Ape Rescue Centre near Bovington is an unexpected gem in the Dorset countryside. Don’t agree with animals in captivity? Fear not: Monkey World is not a zoo. They rescue and rehome primates from illegal captivity such as circuses or black market trades. Animals that can’t be released into the wild come to live at the center in Dorset, with profits from ticket sales supporting their worldwide rescue work.

One of the best-loved attractions in Dorset, Sea Life Weymouth Aquarium is popular with adults and children alike. Discover both local and exotic marine life across 13 different themed zones, including an interactive rockpool showcasing British coastal life. For something special, consider booking a private shark or seal feeding experience for your budding marine biologists.

Explore the Lost Village of Tyneham

While it’s known to many locals, Tyneham remains one of the better-kept secret places to visit in Dorset. The tiny village was taken over by the British government for military training during WWII, and the homes were never returned to the locals. Today, the ruined houses still stand, eerily overgrown, while the restored church and schoolhouse offer a glimpse of rural English life in the 1940s. Combine your trip with the one-mile walk down to the coast at Worbarrow Bay, a remote beach that rarely sees many visitors, even on sunny days.

Weymouth and Portland played host to the sailing events of the 2012 Olympics. Easy to see why, when you considered the sheltered waters of Weymouth’s idyllic bay and the vast walled harbor on the Isle of Portland. The protection of the breakwater wall makes this a perfect place to practice stand-up paddleboarding (SUP). Rent a board or book a lesson – try OTC Watersports or Adventure4All – then head to the nearby Crab House Cafe or Billy Winters for a well-earned seafood supper.

Ramblers will find a wealth of trails to stomp throughout Dorset, both inland and along the coast, where the last leg of the South West Coast Path offers an array of well-signposted trails. For views, tackle the short but steep climb up Golden Cap. At 627ft (191m), it’s the highest point on the south coast of England, with views across Lyme Bay as far as Dartmoor on clear days.

This close to the water, Dorset has no shortage of incredible seafood to enjoy, and the colorful harbor at Weymouth has some of the best. For fish and chips, most locals will recommend Fish ‘n’ Fritz or Bennett’s. In summer, the annual Dorset seafood festival Seafest is a must-attend, held along the harbor against a backdrop of yachts, fishing boats and pastel houses.