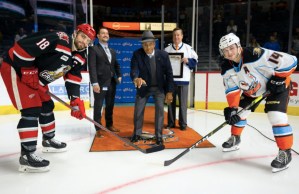 O’Ree, 87, received the honor from county Supervisor Joel Anderson before the hockey Hall of Famer participated in a ceremonial puck drop at the game at Pechanga Arena against the Grand Rapids Griffins.

The New Brunswick native joined the Gulls for the 1967-68 season, their second. He remained with the team for their final seven seasons in the Western Hockey League, matching a career high with 38 goals in the 1968-69 season.

O’Ree returned to professional hockey after a four-season absence in 1978 at the age of 43 with the Pacific Hockey League’s San Diego Hawks, scoring 21 goals and assisting on 25 others in 53 games in his final season.

The forward was elected to the Hall of Fame in 2018 in the Builder Category for his work as the National Hockey League’s diversity ambassador.

In his induction speech, O’Ree explained that he travels “across North America introducing boys and girls to the game I love.”

O’Ree has built and supported more than 30 nonprofit youth hockey programs throughout North America, giving more than 120,000 boys and girls from disadvantaged and marginalized populations the opportunity to play hockey.

O’Ree was born on Oct. 15, 1935, the youngest of 13 children. His dreams of playing in the NHL nearly ended in 1956 when he was hit by a puck while playing for the Kitchener Canucks of the Ontario Hockey Association, losing sight in his right eye.

But O’Ree kept his vision problem secret, saying they “fueled me to try harder, to never give up.” He made his NHL debut in 1958 in the Boston Bruins‘ 3-0 victory at Montreal.

“When I stepped on the ice with the Bruins it did not dawn on me that I was breaking the color barrier,” O’Ree said. “That’s how focused I was on making my dream come true. I didn’t realize I had made history until I read it in the paper the next day.”

O’Ree played one more game with Boston that season, then was re- assigned to the Quebec Hockey League’s Quebec Aces.

He returned to the Bruins in the 1960-61 season, logging four goals and 10 assist in 43 games in what would be the end of his NHL career.

There would not be another black player in the NHL until 1974 when rookie left wing Mike Marson debuted with the expansion Washington Capitals.

Grant Fuhr, a champion goaltender on the Edmonton Oilers, became the first Black player in the Hockey Hall of Fame in 2003. Angela James, who led Canada to four gold medals in the IIHF World Women’s Championships, became the second in 2010. O’Ree was the third.

Jarome Iginla, with 625 goals over 21 seasons in the NHL, became the fourth in 2020. Herb Carnegie, the high-scoring center from the 1930s through the ’50s who dreamed of playing in the NHL but was held back because of race, became the fifth this year.