What Makes A Handbag: Functionality Or Style? 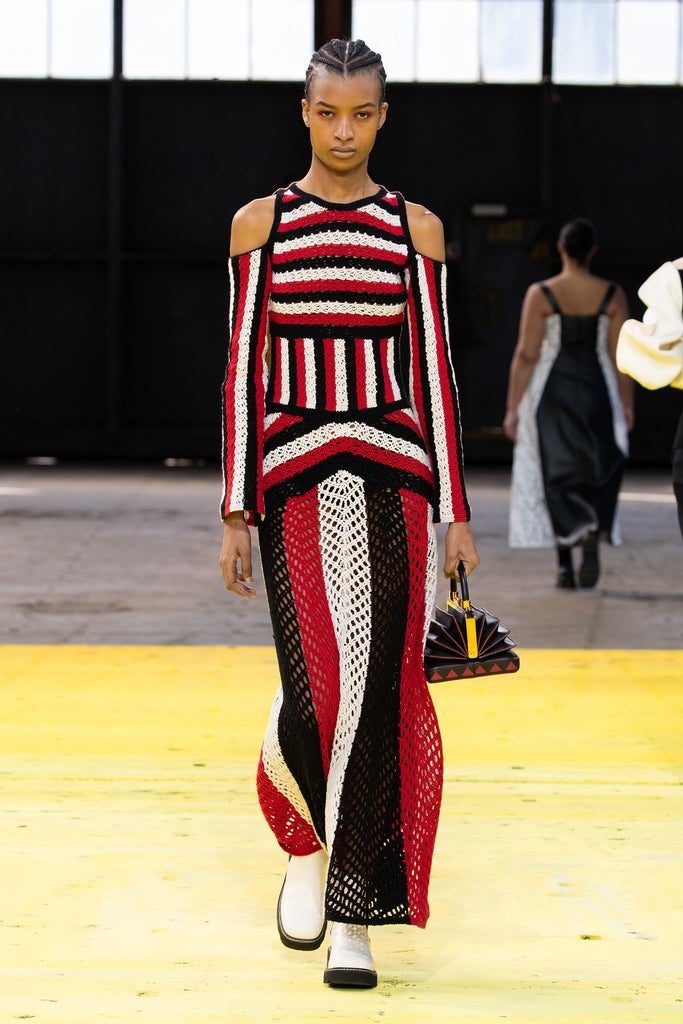 I often think about a scene in The Devil Wears Prada when Andy Sachs’ boyfriend Nate — the movie’s real villain — asks the group, “Why do women need so many purses? You have one you put all your junk in and that’s it. You’re done.” To which Sachs’ friend Doug responds: “Fashion is not just about utility.” The reality is that handbags may have been created to fulfill a functional need, but fashion’s recent interest in “thing bags” has raised the question: Can anything be a handbag?

On the fall runways, handbags took unusual shapes: Gabriela Hearst showed a bag that looked like an open book, while Puppets & Puppets had a bag shaped like a vase. Most recently, Coperni partnered with Brooklyn-based studio Heven for a confounding glass handbag that’s been used by Kylie Jenner, Kim Kardashian, and Doja Cat, while JW Anderson released a pigeon-shaped handbag that’s realistic enough to rattle onlo`okers with even minor ornithophobia. Celebs have also developed their own makeshift handbags: Rosalía was spotted wearing a biker helmet as a handbag before the release of her album Motomami earlier this year.

And the shock effect often gets people talking: The Instagram announcement for JW Anderson’s aforementioned pigeon-shaped clutch generated comments like “The way I need this in my life” and “It’s not a want, it’s a need.” Likewise, other releases like Coperni and Heven’s glass handbag have puzzled consumers, translating the confusion into curiosity. Last year, when designer Nikola Bentel launched a Barilla box-shaped handbag, it sold out quickly, prompting the designer to release a shipping box-shaped handbag earlier this year.

For a while now, I’ve been eyeing Tomme Studio’s basketball-shaped handbags, made from real basketballs that have been split open and accessorized with tote and crossbody straps. I decided to try mine — a black-and-red number that features the famous Jordan Air logo — for a date night that involved a wine tasting and an outing to a whiskey bar. My boyfriend, an NBA fan, mocked me from the minute I grabbed the bag to head out, even queuing basketball-themed songs on Spotify as we drove to the wine tasting. I was vindicated when another attendee stopped me, saying, “That has to be the most badass bag ever.”

While I enjoyed the compliments (I’m a Leo, after all), I had to admit that a basketball bag wasn’t the most functional. While roomy, the constricting nature of the rubber made it hard to reach my essentials. After a few hours carrying the bag, I had some marks from the zipper on my hand, and concluded that this bag was all about personal expression, not convenience.

The  second part of my experiment involved me seeing if truly anything could be a handbag. I reached for a dust bag from a recent wallet purchase from Saint Laurent. (After all, people buy designer trash to wear.) While the dust bag was made to fit the wallet, I was able to squeeze in a couple of extra items, including my keys and a lip balm. Even holding the dust bag was more functional than many of my handbags: the straps made it easy to hold it with my fingers, while the size was just perfect for me to carry it as a clutch.

While Nate’s hypothesis was true — all I truly needed was somewhere to put all my junk in — carrying handbags, for me, is not all about functionality, or even needs. The dust bag was a practical, reusable option for those times when running errands doesn’t require a massive tote bag full of envelopes, keys, wipes, and a makeup bag. Still, Doug’s counterargument rang in my mind the entire time: Fashion is a piece of iconography, used to express individual identity. And while a love of Saint Laurent can be considered personal expression for me, the basic dust bag just didn’t do it.

So it’s safe to say that, yes, anything can be a handbag. The delicate balance between style and functionality is one that fashion has continuously challenged, and even if the bags get more confusing, the reality is that, in this case, a bag is in the eye of the holder.

At Refinery29, we’re here to help you navigate this overwhelming world of stuff. All of our market picks are independently selected and curated by the editorial team. If you buy something we link to on our site, Refinery29 may earn commission.

Like what you see? How about some more R29 goodness, right here?

Our Editor-In-Chief On Why We Need “Thing Bags”

Croissant Bags: The Next Best Thing To A Croissant

Glass Bags Are Trending. Are They Worth The Hype?

Getting Organized with Amazon