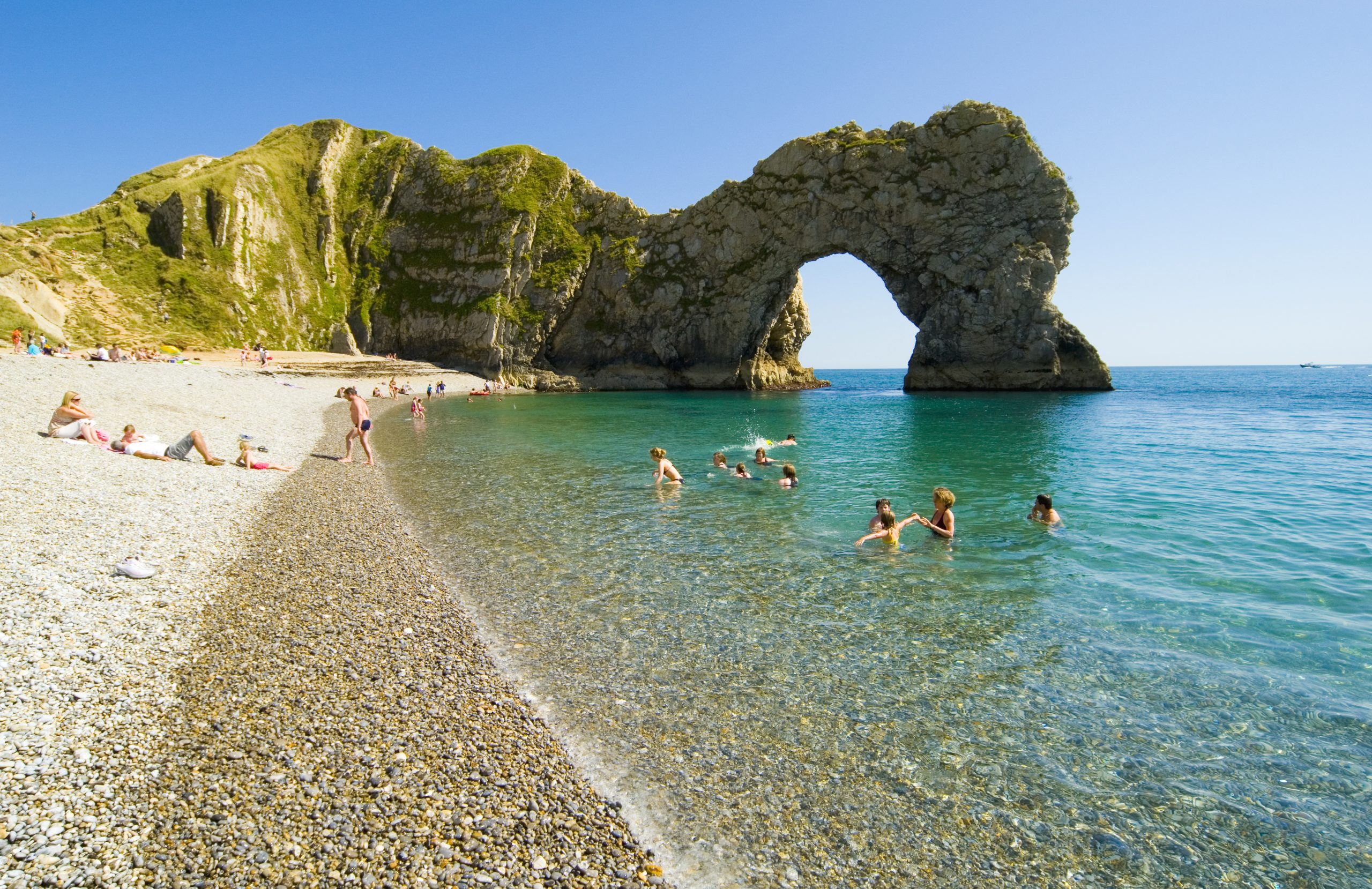 England’s only natural World Heritage Site, this 95-mile portion of the coast has a name that indicates its geological significance. Running from Exmouth in Devon to Studland Bay in Dorset, its unique rock formations and fossil-rich cliffs amaze visitors from all over the world. And if rocks aren’t your thing, the pristine beaches, charming seaside towns and wide-ranging adventure experiences appeal to just about every kind of traveler.

Here’s all you need to know about visiting the Jurassic Coast, and the best things to do on this beautiful stretch of sand and sea.

What is the Jurassic Coast?

To understand what makes the Jurassic Coast so special, we need to rewind a bit. Well, more than a bit: think 252 million years.

The rocks along this stretch offer an almost complete record of the Mesozoic Era (roughly 250 to 65 million years ago). They’re visible traces of the enormous environmental changes that played out over the millennia, starting with the Triassic Period (252 to 201 million years ago), when this part of Great Britain was a baking desert and the shifting of the earth’s crust deposited layers of sediment on top of each other. Moving west along the coast, you’ll find rocks formed during the Jurassic Period (201 to 145 million years ago), when the water rose to form a tropical sea.

When the sea levels fell and then rose again during the Cretaceous Period (145 to 66 million years ago), the older rocks were buried beneath newer sandstone and chalk, preserving them until millennia of erosion carved this geological layer cake into the remarkable landscapes we can see today. Fossils of creatures long extinct have also been preserved among the cliffs’ many strata, with more continually being revealed as erosion from wind and waves continues to do its thing.

The extraordinary geology is the main attraction of the Jurassic Coast

All along the coast, this incredible history takes shape – literally – in the form of unusual rock formations and beautiful bays. The best-known attraction is Durdle Door, a 200ft-tall limestone arch over the sea linking two remote beaches, and one of Devon’s most popular spots. It’s best viewed from the coast path as you walk over the cliffs from Lulworth Cove, a perfect semi-circle of sea enclosed within bright-white chalk cliffs.

Other geological highlights of the coastline include Old Harry Rocks, chalk stacks that line up with the Needles on the Isle of Wight; the unusual rock layers of Kimmeridge Bay; and Chesil Beach, an 18-mile barrier beach linking the Isle of Portland with the mainland and forming a wildlife-rich brackish-water lagoon at the Fleet.

The towering golden cliffs at West Bay were used as a backdrop for the popular ITV series Broadchurch, while the picturesque harbor and quaint seaside town at Lyme Regis are the heart of Dorset’s fossil-hunting history.

In East Devon, don’t miss Orcombe Point Geoneedle in Exmouth, which marks the beginning of the World Heritage Site, or the distinctive red sandstone sea stacks in Ladram Bay.

Take a walk along the South West Coast Path

Running uninterrupted for 630 miles from Minehead in Somerset to Poole Harbour in Dorset, the South West Coast Path is the UK’s longest National Trail, taking in the full 95 miles of the Jurassic Coast along the way.

Depending on your speed, you can walk the whole route in about 10 days, or choose one or two sections for a shorter coast walk. Try the Golden Cap circular walk to climb the highest point on the south coast of England; hit the wild and rugged cliff paths around Portland Bill; or wander the coastal paths around the Isle of Purbeck, where you can explore disused quarries and unique wild-swimming spots.

Look for fossils at Lyme Regis and Charmouth

Lyme Regis became a world-famous fossil hunting destination when Mary Anning discovered a near-complete ichthyosaur, a large marine reptile, here around 1836. Today, it’s still a popular spot for fossil collectors, with new finds being discovered all the time. Look out for the “Ammonite Pavement” on Monmouth Beach, when low tide exposes a rock shelf containing hundreds of fossils.

Walk along the beach between Lyme Regis and Charmouth to spot fossils lying among the shingle. Be careful, though: the beach can sometimes be cut off at high tide, and the cliffs are dangerous in places, especially after rain. Amateurs are advised to book a guided fossil-hunting tour rather than go it alone; these can be booked through the Lyme Regis Museum or the Charmouth Heritage Coast Centre.

The sweeping curve at Kimmeridge Bay is part of a Marine Special Area of Conservation, making it an excellent location for snorkeling and scuba diving. But you can also explore this rich marine life on the beach itself.

The bay’s distinctive geometric rock shelves and ledges are littered with rock pools at low tide. Don’t miss the Wild Seas Centre, a small, free museum on the slipway, to learn a little more about the local marine life.

Cool off with a spot of wild swimming

Along the Jurassic Coast, experienced wild swimmers will find a wealth of exciting pools and hidden coves to plunge into. Chapman’s Pool and Worbarrow Bay offer remote beaches that can only be reached by walking. For something a little different, head to the tidal pool at Dancing Ledge, a man-made swimming pool that was blasted into a natural rock shelf in the 19th century for the enjoyment of local schoolchildren.

Snorkel with seahorses in Studland Bay

Studland Bay, just beyond the eastern end of the Jurassic Coast, is one of the only known breeding sites for both the spiny and short-snouted seahorse, making it one of the UK’s best snorkel sites. Since the tiny creatures are masters of disguise, patience is key and is often rewarded with sightings, particularly during summer. Approach slowly and take care not to disturb the seahorses or their habitat.

Hop aboard the historic Seaton Tramway

Take a ride back in time on board the Seaton Tramway, a network of narrow-gauge heritage trams running through the Axe Valley in East Devon. As well as a taste of history, these colorful open-top trams offer brilliant views of the River Axe estuary and Seaton Wetlands nature reserve. Keep an eye out for local birds and wildlife, including kingfishers, herons, foxes and little egrets.

Get the adrenaline pumping with a water-sports adventure

Boasting a mix of sheltered bays and more exposed beaches with great surf, the Jurassic Coast is the perfect destination for adventure. Thrill-seekers should try coasteering at Lulworth Cove for an adrenaline-pumping way to explore the cliffs and rocks. Or hop on a rigid inflatable boat (RIB) at Lyme Bay or Weymouth for a fast-paced tour of the seafront.

Old Harry Rocks, Durdle Door and Lulworth Cove are impressive backdrops for a spot of sea kayaking – though amateurs would be advised to book a guided tour as currents can be challenging. For a gentler ride, Weymouth Bay, Studland Bay and Portland Harbour are more sheltered spots – and ideal for paddleboarding.

You can also try your hand at kitesurfing, windsurfing or sailing lessons at locations along the coast (try Portland or Poole), or take a boat tour from any of the larger harbors for something less hands-on.

The best times to visit the Jurassic Coast

Summer offers the best chance of nice weather for beach days and water sports on the Jurassic Coast, as well as a busy program of festivals and events to entice tourists of all interests. Note that since this is the busy season, popular spots like Bournemouth Beach and Durdle Door can be very crowded, especially during the summer school holidays.

While summer can sometimes be too hot for hiking, the spring and autumn shoulder seasons are ideal for coastal walks. Spring is especially lovely, with an array of wildflowers scattered across the grassy headlands and in woodlands. These are also the best times of year to spot both wildlife and fossils.

Numerous food and seafood festivals run along the coast throughout spring and summer. One of the biggest is SEAFEAST, the Dorset Seafood Festival, held on Weymouth’s colorful harborside in September.

Winter is overlooked by most tourists, but if you brave the unpredictable British weather you’ll find there’s still plenty to do. Seals come ashore to breed during the autumn and early-winter months, so keep an eye out when walking (briskly) along the coastal paths.

How to get to the Jurassic Coast

The closest international airports are at Bournemouth, Exeter and Southampton, although most visitors from overseas will likely fly into one of the larger London airports.

If you’re renting a car on arrival, it takes about 2 hours to drive to Bournemouth or Poole. From either of these towns, it’s easy to start a road trip along the coast, calling at whichever villages and attractions take your fancy.

Taking public transport from London to the Jurassic Coast is easy

South Western Railway runs a service from London Waterloo to Weymouth that takes just under 3 hours. From Weymouth, you can use the X53 and X54 Jurassic Coaster buses from First Bus to travel to most towns between Poole and Axminster.

The train from London also stops at Bournemouth and Poole, which place you closer to the eastern end of the Jurassic Coast. From here, you can use the Purbeck Breezer services to reach Studland and the Isle of Purbeck.

The best way to explore the Jurassic Coast is by car

The easiest way to explore the Jurassic Coast is by car, but bear in mind that some of the more remote destinations are accessed by narrow country lanes and may have limited parking.

Many of the busier towns, such as Weymouth and Bournemouth, operate park-and-ride services during summer. Use these to avoid getting caught in seaside traffic in the town centers.

The Jurassic Coast also has an extensive public transport network for those who want to explore without a car. Bus services are fairly frequent and call at most of the major destinations. The Jurassic Coaster buses (First Bus X52, X53 and X54) run between Axminster and Poole, while the Purbeck Breezer (More Bus) services connect Bournemouth and Poole with Swanage, Wareham and the Isle of Purbeck.

There are many accommodation options on the Jurassic Coast

With 95 miles of coastline to explore, you’re spoiled for choice when it comes to choosing a place to stay on the Jurassic Coast.

The largest town around, Weymouth is well connected to the delights of the coast in both directions, making it a good base for exploring the area. Numerous beachfront hotels are close to all the bars and restaurants of the lively town center, while families might want to consider the popular Waterside Holiday Park and Spa on the town outskirts. For those on a budget, the clifftop campsite at nearby Eweleaze Farm boasts some excellent views.

The quaint seaside town of Swanage is ideally poised for exploring Studland Bay and the entire Isle of Purbeck, with accommodation options ranging from a YHA hostel to cosy B&Bs. In nearby Studland, luxury boutique hotel The Pig on the Beach is known for its top-quality restaurant and dazzling sea views.

Towards the eastern end of the Jurassic Coast, Lyme Regis is another popular seaside town with a range of hotels and accommodation options, while Sidmouth offers up the grandeur of a Victorian seaside resort.

For something a little different, try glamping at Durdle Door or in a Lyme Regis beach hut. Fans of quirky history will likely enjoy the Smuggler’s Inn at Studland, a cosy boutique inn and pub which was once a hangout for an infamous local smuggling gang.