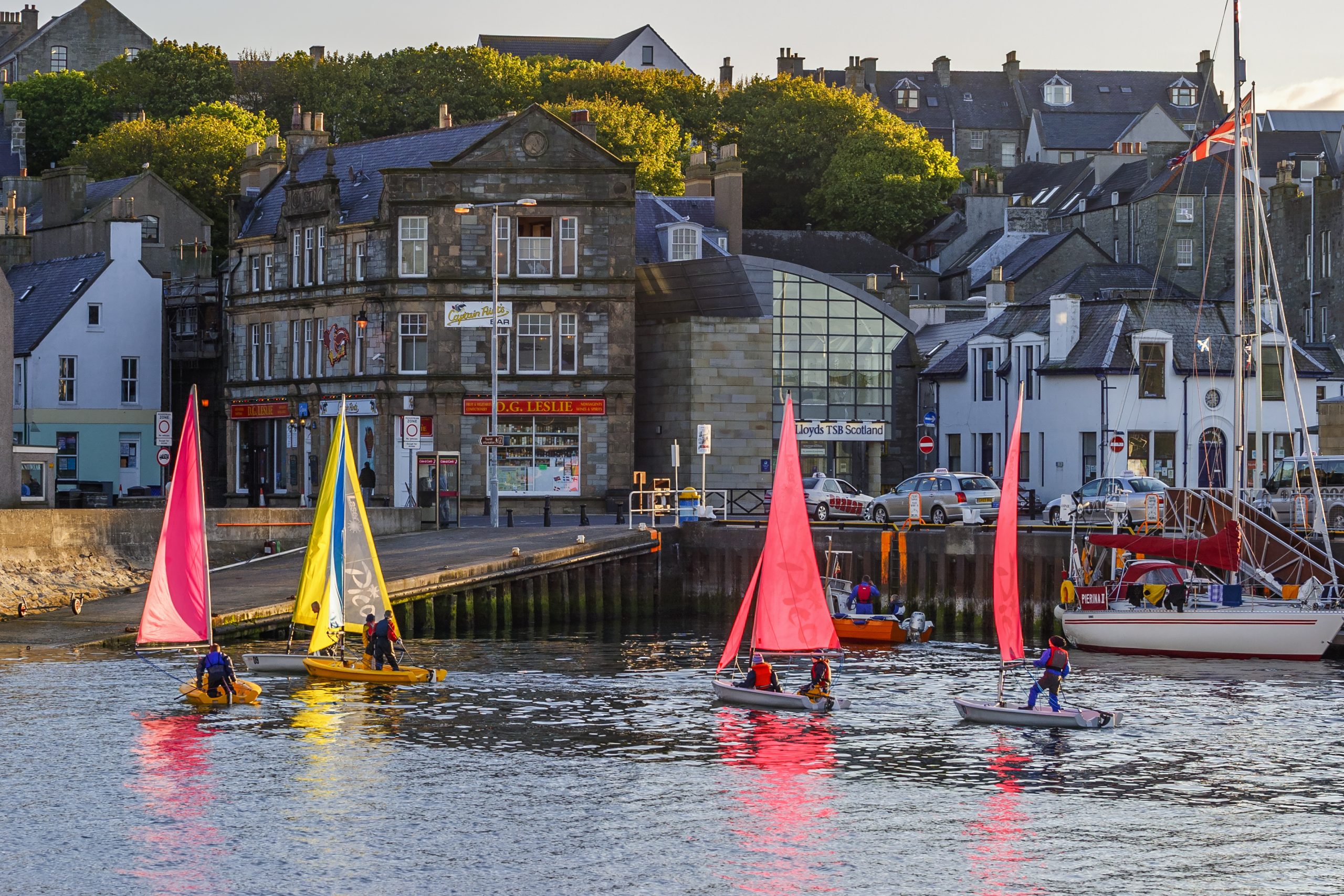 It’s not often acknowledged, but Scotland is part of an archipelago. The island it shares with England and Wales is just the beginning of a sprawl of 900 islands, skerries and stacks that spread across the North Atlantic, reaching almost as far as Norway.

From the Inner Hebrides, with their culture of crofting, fishing and whisky-making, to the wild, windswept Outer Hebrides and the scattered, history-rich isles of Orkney and Shetland, the Scottish Islands are a world to themselves – tangibly Scottish, but unmistakably influenced by Viking raiders, time-steeped legends and the unforgiving sea.

Whatever your tastes and temperament, you’ll be sure to find a Scottish island that fits your mood, accessible by ferry from the Scottish mainland. Here’s our pick of the best.

Surf wild beaches on the Isle of Lewis

Leave the pranksters taking selfies by the Butt of Lewis sign to their fun; the real magic of the largest island in the Western Isles can be found on its beaches.

Sprinkled along the Atlantic seaboard of Lewis are sands so blond and perfect they could have been plucked from Antigua. Traigh Scarista, Uig, Port of Ness, Dalbeg and Mangersta offer some of Britain’s best surfing, particularly during wild winter swells. Contact Surf Lewis if you’re tempted to take on the breakers.

Back on land, set aside some time to explore austere but proud Stornoway, with its imposing castle; sit in on a sonorous Gaelic-language sermon at a local church (or the Hebridean Celtic Festival if you’re here in July) and take a detour west to the ring of standing stones at Callanish (Calanais), Britain’s most impressive stone circle.

Wander across the centuries in Mainland Shetland

From the moment you arrive on Shetland’s largest island, history oozes out of the landscape. You’ll sense it as you cruise past the historic harbor of Lerwick, or descend onto the ruler-sized runway at Sumburgh Airport, passing the low-lying hummocks of Jarlshof, where 4000 years of history spills onto the shoreline – in this one spot, you’ll find Neolithic remains, Bronze Age homes, Iron Age wheelhouses, Viking longhouses, even the ruined mansion of a medieval earl.

Over on the east coast of Mainland, boats tootle across to the RSPB bird reserve on the isle of Mousa, home to 7000 breeding pairs of storm petrels and the spectacularly preserved remains of Mousa Broch, a chimney-like drystone tower erected by Shetland’s Iron Age inhabitants.

To sample Mainland’s living history, step into the Lounge Bar on Mounthooly St in Lerwick, where regulars pick up instruments and launch into spontaneous reels and shanties, as they have for generations.

It takes a bit of effort to get to St Kilda, the most remote of the Western Isles, but when you reach this wave-crashed collection of sea cliffs and rocky stacks, you’ll have more than a million seabirds for company. St Kilda’s hardy inhabitants eked out a living by fishing, raising sheep and scrambling up the cliffs to harvest birds’ eggs until 1930, when the last 35 islanders were relocated to the mainland.

From April to September, long, stomach-testing day trips cross the rough Atlantic waves from North Uist, Skye and Harris. For a deeper dive into the lonely isolation of St Kilda, make arrangements through the National Trust for Scotland to stay in the basic campsite on Hirta, the main island – you’ll need to bring all your food with you and take all your rubbish out when you leave.

Along with nearby Shetland, Mainland Orkney was reputedly created from the teeth of the Stoor Worm, a monstrous sea serpent that plagued the Scottish coast until it was dispatched by an Orcadian farmer’s son.

Legends still wash over the landscape on this timeless island – one of the best is the Marie Celeste–style tale of how the Neolithic village of Skara Brae was mysteriously abandoned around 2500 BCE and reclaimed by the sands, only to be uncovered by a storm in 1850. Even today, the low stone huts look as though their Stone Age occupants just walked out the door.

Over at Maeshowe, a Neolithic chambered tomb adds historical weight to legend. The last burials at Maeshowe took place 5000 years ago, but Viking marauders raided the tomb in the 12th century, leaving bawdy rune graffiti and etchings of dragons and serpents. In Kirkwall, Orkney’s pocket-sized capital, the local legend is Earl Magnus, the 12th-century ruler of Orkney, name-checked in three Norse sagas following his martyrdom by a Norwegian rival.

Tackle legendary hikes on the Isle of Skye

Since the construction of the Skye Bridge in 1995, the Isle of Skye has been anchored to the Scottish mainland, but the most northerly island in the Inner Hebrides still serves up some of Scotland’s most uplifting hikes. Skye’s fame precedes it, however, and the trails to the Quiraing and the rocky spire of the Old Man of Stor can be mobbed in season.

The good news is that Skye is large and rugged enough that you can hike away from the masses. Beyond walking, Skye serves up a sampler of all things Scottish. There are castles (including famous Dunvegan, seat of the MacLeods), timeless fishing harbors, scenic beaches, and – of course – Scottish whisky, care of the Talisker Distillery, where guided tours come with a complimentary dram.

Dark and moody, Jura broods off the west coast of Scotland, reached by a summertime ferry from Tayvallich on the mainland, or year-round boats from nearby Islay. Amongst left-leaning folks and literature buffs, the island is best known as the spot where George Orwell came in 1948 to write the manuscript of 1984.

The reality of Jura, though, is far from dystopian, though the rainfall can be wearing. Warm your insides on a tasting trip to the Isle of Jura Distillery, which relies on the abundant water supply for its well-regarded single malt. If whisky isn’t your poison, head instead to the Lussa Gin Distillery; while you’re here, you can walk to the northern tip of Jura to view the “Scottish Maelstrom” – a surging whirlpool that becomes a boiling cauldron during flooding spring tides.

Commune with birdlife on Unst, Shetland

About as far north as you can go in Scotland without hitting Norway, the island of Unst is a sparsely inhabited bump of land perched at the edge of the world. The landscape has been worn low and smooth by endless centuries of scouring winds, but where humans struggle to survive, seabirds thrive, and the place to encounter them is the legendary Hermaness National Nature Reserve.

A 4.5-mile round-trip walk takes you past craggy sea cliffs where skuas dive-bomb, puffins comically skitter about, and gannets, fulmars and guillemots squabble noisily for nesting space. When you’ve had your fill of birdlife, drop by Bobby’s Bus Shelter, converted by locals into a cozy bower, with chairs, novels, chintzy decor and its own visitors’ book.

Find a greener way of living on Eigg

Tiny Eigg shot to fame in 1997 after being purchased by its inhabitants to escape the whims of the various outsiders who held the legal title to the island. Over the centuries, Eigg has been the seat of a Pictish saint, a battleground in the Jacobite rebellion, a hub for crofters, a victim of the Clearances and the site of an infamous massacre by the MacLeod Clan from Skye, but today it’s best known for its green credentials.

After reclaiming their island from its last feudal owner, the inhabitants of Eigg converted the “big house” into the Earth Connections Eco-Centre, a hub for courses in environmentalism and yoga. The island also proudly generates 95% of its electricity from renewables and enthusiastically embraces organic farming. (See the island’s Green Eigg website for more on locals’ ambitious plans for the future.)

We’ve paired Mull and Iona as these two historic isles are so easy to visit together, lying side-by-side on the west coast near Oban. From Iona, it’s easy to tack on a boat trip to Staffa, where basalt-column-lined Fingal’s Cave was the inspiration for Mendelssohn’s Hebrides Overture – that’s three great island adventures off the back of one car-ferry journey from the mainland.

Iona is famous as the burial site of Scottish kings, including a certain Macbeth, who spends the centuries in the graveyard at imposing Iona Abbey. This was also the spot where the Book of Kells – now pride of the library at Dublin’s Trinity College – was transcribed. Over on sprawling Mull, there’s plenty to see: rainbow-colored Tobermory; lovely beaches; whales and eagles for nature-lovers; and one of Scotland’s best fortresses at Duart Castle, ancestral seat of the MacLean clan.

The Market In Virginia That’s An Antique Shop, Farm Store, and Coffee Shop All In One