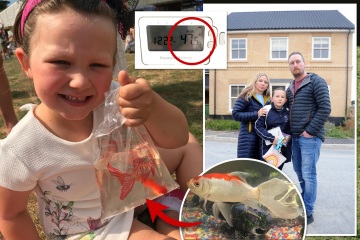 BRITS heading to Turkey, Greece and Cyprus this month have been warned of extreme weather conditions that could ruin their holidays.

A heatwave has raised temperatures in the southeastern part of Europe, breaking some records in the region.

The Turkish holiday hotspot of Antalya reached 41C over the weekend, the hottest day in October in the country since 1930, according to meteorologist Yaser Turker.

He wrote: “Antalya experienced a historical day in terms of temperature.

“Antalya Airport experienced the hottest October day since 1930 with 41.2C.”

Yaser explained that this was due to “the blow-drying of the hot air coming from Africa and descending to the bay from north and northwest.”

Spain holiday warning – hundreds of flights cancelled due to storms

Temperatures have also risen in both Cyprus and Greece as well, with both countries going close to the 40C mark already this month.

The Met Office in Cyprus issued a yellow weather warning last week, due to the high temperatures over the weekend.

With Brits heading to the popular destinations later this month during the October half-term, the heat could cause problems especially for families with young children.

The UK Foreign Office is yet to update the travel advice for the destinations, but families travelling during a heatwave are urged to stay out of the sun during the peak hours of 11am and 3pm, as well as wear loose clothing and stay hydrated.

The high heat comes at the of a summer of scorching temperatures throughout Europe, with the UK recording 40C in July and Spain getting as hot as 45C.

It may not put holidaymakers off visiting Turkey however, with holidays there now significantly less expensive than they were five years ago for Brits.

Brits can now expect to get 21.5 Turkish lira for £1, making Turkey a whopping 375 per cent cheaper to visit compared to 2017, according to research done by finance experts CashLady.com.

Families could look to take advantage of this during the October half term, which runs from Monday October 17 – Friday, October 28.

TUI’s sale has slashed £200 off all-inclusive couple holidays to Turkey with breaks available from £57pp a night.

The tour operator also has last-minute all-inclusive deals to Turkey from £363pp – a saving of up to 50 per cent.

Temperatures in Cyprus are expected to remain around 30C throughout autumn.

There are also deals available for 2023 trips to Turkey.