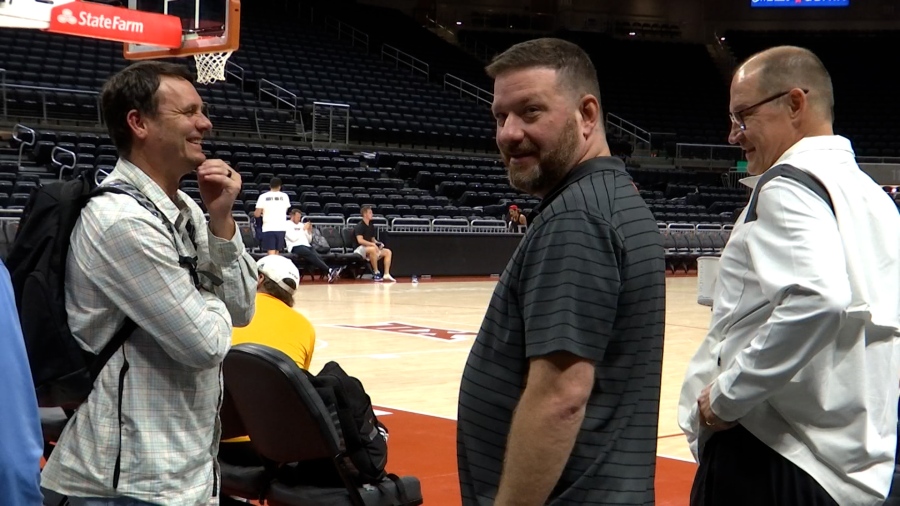 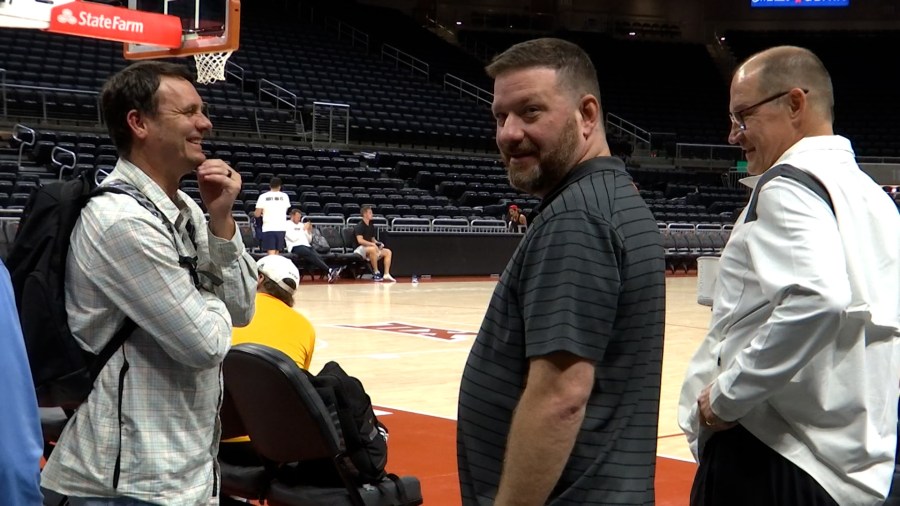 EL PASO, Texas (KTSM) – Full circle is an overused term, but nothing describes Monday’s season-opening clash between UTEP and no. 12 Texas at the brand new $375 million Moody Center in Austin any better.

Coming off a 20-win season and a postseason berth, second-year UTEP head coach Joe Golding knows he’s taking a roster with 13 new players into a hornet’s nest on Monday night.

“I’m not doing our team any favors; we’re going to go play one of the best teams in college basketball on the opening night of their new facility,” Golding said. “I just wanted to know what our team was and I think the earlier we find out, the better. No matter what the scoreboard says Monday night, if we win or lose, we’re going to get better.”

It’s a game that will net UTEP a $120,000 pay day and has been in the works for months. It’s also one that Golding himself unknowingly set in motion 19 months ago in the NCAA Tournament.

On March 20, 2021, Golding’s 14-seed Abilene Christian squad defeated three-seed Texas 53-52 on two late free throws from Joe Pleasant in the first round of March Madness. The stunning upset was the biggest in program history, made the Wildcats a household name and set off a chain reaction.

“On the flight back and just talking with coach I realized that this might be a life-changing win,” said UTEP assistant coach Bryen Spriggs, who was a member of the ACU coaching staff in 2020-21.

That left the opening in the Sun City and on April 14, 2021, Golding was hired at UTEP. It was a chain of events that might never happen if ACU didn’t beat Texas, but Golding doesn’t think it has anything to do with him.

“I don’t take any credit, I just think that’s how college basketball is set up. I do think it’s interesting how the dominoes fell within our friendship, though,” Golding said.

Golding and Beard have been close for almost 30 years. Their friendship made headlines when a now-famous photo of the two men on a rock on the Frio River over a decade ago hit the internet during ACU’s tournament run.

“It’s a photo that’s very important to me and our friendship because of how far we’ve come from that rock,” Golding said.

“I think things always happen for a reason. It impacted a tremendous amount of lives, many families, three or four universities, but I’m sure glad it did happen,” said UTEP associate head coach Jeremy Cox.

Golding may not take credit for setting it up, but the fact of the matter is that dozens – maybe hundreds – of lives were changed because of the Wildcats’ upset.

“When it first happened you don’t really see it,” said Reggie Miller, now a UTEP graduate assistant coach who played a huge role in ACU’s upset of Texas. “Then you start seeing a little bit and I thought I was seeing it all, but then I got here and I was like dang some of these people are here because of it, some people are not here because of it so it had such a big effect you don’t even really know.”

It’s even impacting the next generation of coaches who weren’t affiliated with UTEP, ACU or Texas last March. People like Texas guard-turned-graduate assistant Tristen Licon, an Americas High School graduate who played at Division III Sul Ross State with his best friend Giles Gilliam, who is now a UTEP grad assistant.

Both of them got their coaching starts with the help of Mary Hardin Baylor coach Clif Carroll, a long-time friend of Beard and Golding, who coached Gilliam and Licon at Sul Ross.

“We talk about it as far as our own bosses,” Gilliam said. “You see the photos that came out last March. We’ll see what happens, but it would be really cool to see those photos one day that become famous of us.”

Licon spent the 2021-22 season as a graduate transfer playing under Beard at Texas and will embark on his coaching career against the hometown team on Monday.

“It’s pretty emotional. Growing up I was at almost every UTEP game. There’s a lot at stake and at the end of the day it’s a game between two really good teams,” Licon said.

Monday will no doubt be special; the Longhorns opening their new $375 million arena, the Miners looking to get back on the Lone Star State hoops map in the first meeting between the two sides since Dec. 29, 1991, a UTEP win in El Paso.

All of it will do nothing but the add even more memories to life-long friendships.

“I don’t know if I have a better friend in life or basketball than Joe Golding,” said Beard. “He’s a guy that we always pull for and I look forward to the competition.”

“I do tell him down the road he’s going to take care of me,” Golding joked. “I did help him and he makes a lot more money than I do right now, so he’s gonna put me on full scholarship one day. Whether that’s buying me a beach house or a lake house, he’s going to do something for me.”

Golding and Beard were proudly part of the last game at Lubbock’s Memorial Coliseum years ago; Monday, they’ll add another notch to the friendship and open the new Moody Center, at 7 p.m. MT on Austin. The game will air on the Longhorn Network.