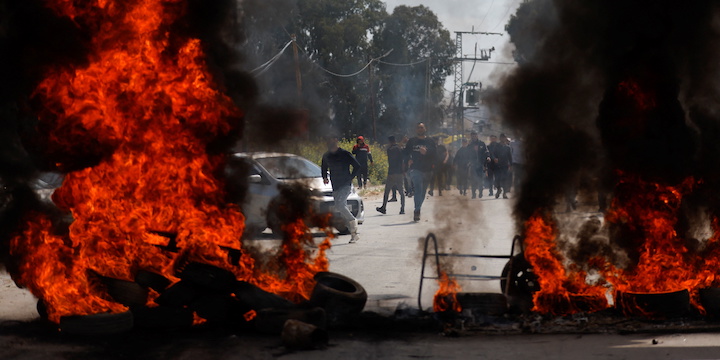 Palestinians run near burning tires during clashes with Israeli forces following a raid, in Jenin in the West Bank April 9, 2022. Photo: REUTERS/Mohamad Torokman

i24 News – The spokesman for the Palestinian militant factions in the West Bank city of Jenin, Abu Moujahid, told i24NEWS on Wednesday that the release of the body of the Israeli killed in a car accident is being worked on after it was determined that he was not a soldier.

Moujahid informed the i24NEWS Arabic channel in an exclusive interview that the Palestinian gunmen who stole Ferro’s body from a hospital determined that the 18-year-old Israeli Druze was not a soldier. Contacts were then established with the Red Cross to arrange to send the body back to Israel and to Ferro’s family.

Ferro died after a car accident in Jenin on Tuesday morning. His body was reportedly snatched from the Ibn Sina hospital in Jenin by Palestinian gunmen after dying from the injuries sustained in the accident.

From the Israeli Druze town of Daliyat al-Karmel, Ferro was critically injured in the wreck and a friend was seriously injured. His body was reportedly being held in the Jenin refugee camp.

According to Moujahid, the kidnapping was carried out by armed men from all of the Jenin factions to attempt to exchange the body for the bodies of Palestinian militants from Jenin held by Israel.

“However, since we learned that he is not a soldier, we are working to return the body,” Moujahid said.