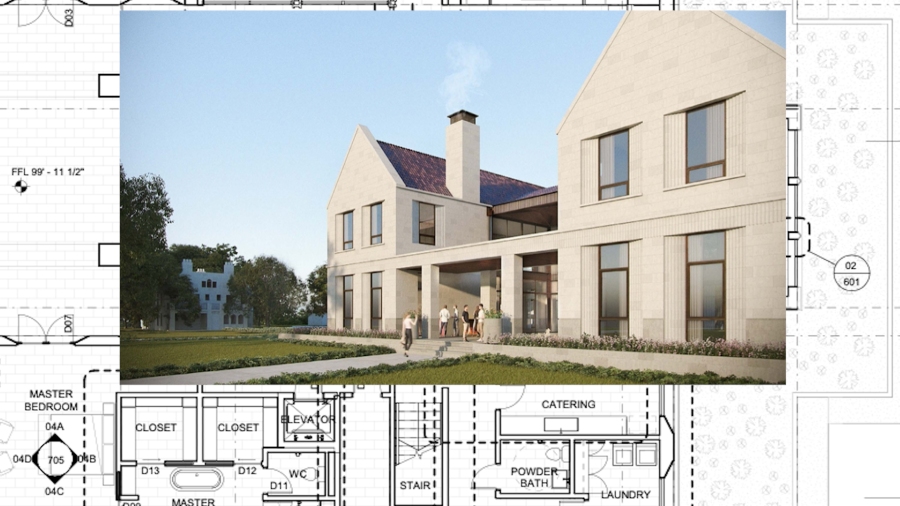 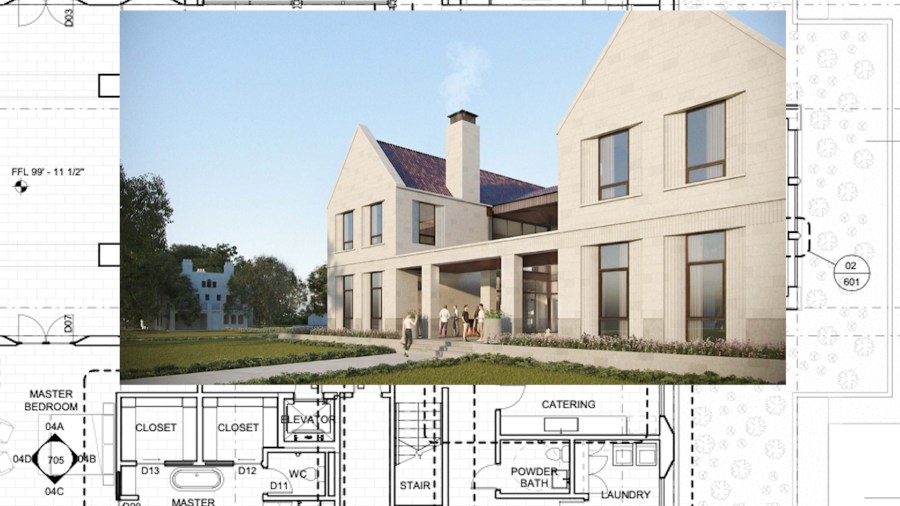 OKLAHOMA CITY (KFOR) — The State of Oklahoma has a website devoted to the Oklahoma Governor’s mansion. As of this month, paragraph 12 of the website states: “Governor Stitt and his family live in the five rooms on the second floor.”

We know that’s not true.

News 4’s Ali Meyer has been digging for the truth.

She unearthed a secret plan to build a brand new Governor’s mansion on the grounds of the capitol complex.

The historic Governor’s mansion was constructed in 1927; opened in 1928.

The Oklahoma Governor’s mansion was built to be a home for the governor and first family.

Every governor since Henry Johnston has made a home here; 19 governors in 90 years.

Governor Kevin Stitt does not live in the Governor’s mansion.

In August of 2019, he moved his family from Tulsa to Oklahoma City.

The Governor’s office confirms the first family moved into the historic Governor’s mansion in August of 2019.

Instead, the Stitts purchased a $2.7 million dollar estate at Oak Tree Golf and Country Club, twenty miles away from the State Capitol.

According to the Governor’s staff, at the time Governor Stitt took office in 2019, the mansion had fallen into disrepair.

The Governor’s office tells us, mold in the HVAC system caused the Stitt children to get sick.

They claim the house was a fire hazard because of old electrical wiring.

They say it was “not conducive for family living.”


Student loan forgiveness: Here’s what will be on the application set to open soon

In January of 2019, before the first family had even moved into the historic mansion, Governor Stitt was already working on plans to build a lavish, new, private Governor’s mansion.

News 4 has spoken to every living former governor. They all say the historic Governor’s mansion is a treasure; living in the home was a joy, one of the highest honors in Oklahoma.

For a century, it has been a privilege to reside in the halls of history at NE 23rd and Phillips, in the shadow of our state capitol.

“Back in the day, governors would have legislators over to the mansion for breakfast, “said Oklahoma historial Dr. Bob Blackburn. “It was important to get to know each other on a personal level before you go into battle, over at the Capitol.”

Historians have a chronicle of first family contributions.

Our ninth governor turned the grounds into a community garden in the 1930’s.

In the 1980’s Governor George Nigh added the Oklahoma swimming pool and later founded Septemberfest, which was an annual celebration of the official residence of the first family.

“People would be parking a half a mile away and walking in,” said Dr. Blackburn. “They were getting the chance to see the Governor’s mansion, a chance to tour it, to see where the first family lived.”

Recent governors have taken great pride in the restoration of the 14,000 square foot mansion and grounds.

Before that, Governor David Walters expanded the family living area on the second floor to accommodate the first family’s four children.

Governor Mary Fallin designed and built an outdoor kitchen as her legacy gift to the state.

“It’s a privilege to be there. What other families get to live in the governor’s mansion?”

Sharen Lenhart Polkinghorne has worked in the Governor’s mansion since 1980.

Polkinghorne was hired as a regular caterer for three governors, later an Executive Assistant to First Lady Rhonda Walters and most recently she served on the Christmas decorating team under Governor Mary Falling and Governor Kevin Stitt.

“It’s a part of Oklahoma,” Polkinghorne said of the historic mansion. “I mean, we are pioneers. Everybody knows we are a people that we’re strong, and we built that mansion for the first family. It’s a privilege to be there.”

Last year, the state completed a $2 million renovation of the historic mansion, including a new roof, new windows, new geothermal heating system, new kitchen and repairs for the electrical, plumbing and structural issues.

According to the Office of Management Enterprise Services, the state poured $2,090,580 in taxpayer money into a home where our governor does not live.

The Stitts presented a multi-million dollar idea: to build a new governor’s mansion.

According to multiple sources in the room, the Governor brought in a well-known fundraiser, a large public relations firm and an architect.

They presented concept drawings and architectural sketches for a second mansion on the south side of the grounds.

“Even if 100 percent of the funds are raised privately to build a new residence on the property, there’s going to be ongoing maintenance costs,” said Dr. Steve Agee, professor of economics at Oklahoma City University’s Meinders School of Business.

The Stitts were hoping for enthusiastic approval from the former first families.

Instead, the room was quiet.

There was no support for their proposition.

One former first family raised concerns about the cost.

“So, if they’re going to raise $5 million or $6 million or $7 million for a new residence at the Governor’s mansion to build a new residence, then that opportunity to give to other organizations goes away for that amount of money,” said Dr. Agee. “So I do think that the nonprofit community, if they don’t already know about it, will be a little bit surprised. I didn’t know about it and i was a little bit surprised.”

Without the blessing of the former first families, the Stitts pushed on.

The non-profit organization Friends of the Mansion has been quietly raising capital for a new governor’s residence.

The Executive Director refused to provide meeting agendas or minutes; News 4 obtained both, dating as far back as 2019.

From these documents we can see, the budget is $6.5 million.

Friends of the Mansion has been accepting donations of up to $250,000 from foundations; up to $150,000 from individuals.

These contributions are un-trackable, private money solicited from wealthy individuals confidentially. Although Friends of the Mansion is not legally required to release the list of donors, News 4 cited Governor Stitt’s previous commitment to transparency and requested the list. Governor Stitt’s office and the Executive Director of Friends of the Mansion, both declined to provide it.

“Who’s donating? What are they getting kickbacks on? I guarantee they are,” said Republican State Representative Logan Phillips. “We have no bid contracts here, and the Governor is using this as a way to garner funds for himself or garner funds for his bank system. This is self-enrichment and self-dealing at its very core.”

The Governor’s Director of Communications Carly Atchison believes a new, private residence will be a great asset to the state.

She says this plan will “make the Governor’s mansion that much more accessible to the public.”

Future first families are welcome to live in the historic mansion if they choose.

Atchison said, “I think this is an amazing and thoughtful gift from the Governor and First Lady.”

The Communications Director denies the plans were a secret.

However, both Atchison and First Lady’s Chief of Staff claimed to be unaware of the plan to build a new mansion when we first called one week ago on October 4th, 2022.

Additionally, according to minutes from the May 2021 meeting, the President of the Board for Friends of the Mansion, “reminded board members to keep everything pertaining to the project confidential.”

We called a dozen Republican lawmakers to ask for their thoughts on the Governor’s plan to use private funding to build a new private mansion.

None of them were aware of the project.

Most said they feared retaliation from Governor Kevin Stitt.

“This is brand new information,” said Logan Phillips. “At no point have we been told anything about building a new mansion.”

In fact, the Executive Director of the Friends of the Mansion asked board members to sign a non-disclosure agreement in February of 2020, to ensure this plan to build a new private governor’s mansion stayed under wraps.

“That is absolutely insane. It just shows exactly how out of touch this governor is with the current situation in Oklahoma,” Phillips said. “We have schools that were held to 0% increase, and now he’s going to build a mansion because the mansion is not fancy enough for him. That is inappropriate.”

The Governor’s office tells us construction on the new private residence will begin next year.

They say, they were planning a formal, public rollout of the campaign after the election.

The first floor of the mansion is currently open for tours.

The First Lady hopes to expand the tours to include every floor of the mansion, which is a convenient option, since the first family does not live in the residence.

One week after our initial request for information, the Executive Director of Friends of the Mansion confirmed the plan to build a new mansion with this statement:

“Governor Stitt and First Lady Sarah Stitt have chosen to raise private funds for a new, family friendly residence that better accommodates families with young children, and those in need of ADA compliant facilities, and will allow the historic mansion to be more publicly accessible to the people of Oklahoma.  No taxpayer funds are used for legacy gifts, as this is all run through Friends of the Mansion.”

KFOR would have preferred to talk to the Governor on-camera.

We made that request a week ago. We are still waiting to hear back.

We first contacted multiple members of the Governor’s staff on Tuesday, October 4th.

News 4’s Ali Meyer reached out to the Governor’s Press Secretary, Kate Vesper, and Communications Director, Carly Atchison, by email. That same day, we called and spoke to the First Lady’s Chief of Staff, Lauren Dunlap. Ali Meyer has had multiple text and email exchanges with Atchison in the past week.

News 4 delayed the release of this report to allow the Governor’s communications staff the time to thoroughly respond to all claims in this exclusive report.