Down in Flames! Best Dodgers Season in History Ends in Disappointment After 5-3 Loss to Padres in Game 4 of NLDS 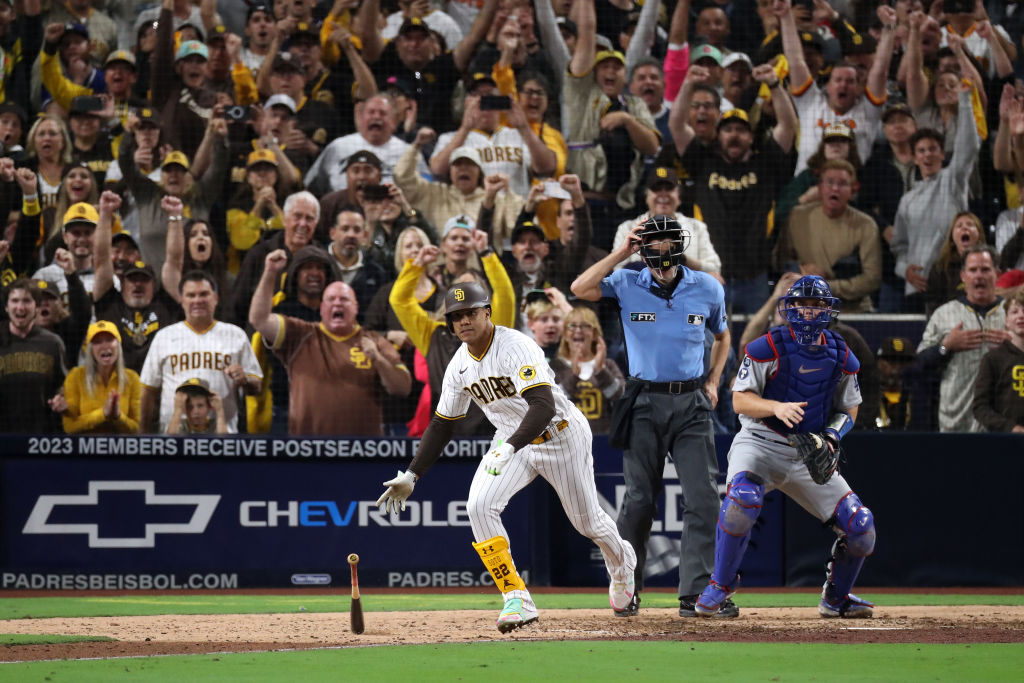 A fifteen minute moment during a four-hour game was all that was needed to explain why the Los Angeles Dodgers historic season was doomed.

They led by three runs with just nine outs to go in the National League Division Series. They entered the game on the brink of elimination, but they had been in that same spot last October and rallied to win the last two games of the series.

This year was different.

This time, the Dodgers didn’t charge back from the brink like they did in 2020 and 2021. This time they wilted like a starving flower in winter when the moment was the brightest.

The greatest season in Dodgers history ended Saturday night with a whimper in a 5-3 loss to the San Diego Padres in Game 4 of the NLDS.

Fifteen minutes. That’s all it took to change the course of history.

Tommy Kahnle entered the bottom of the seventh in relief. He walked the leadoff hitter. Back-to-back singles gave the Padres their first run and ran Kahnle from the game. Yency Almonte entered in relief in the fireman role, a spot normally reserved for Evan Phillips.

Almonte didn’t fair much better. A double to Ha-Seong Kim and a single to Soto tied the game at 3-3. Petco Park became the new appointed screaming spot for San Diego fans.

Almonte made one pitch to Brandon Drury before Dodgers’ manager Dave Roberts came with the hook, opting for San Diego native Alex Vesia instead. Vesia hung a slider and the rest is history.

The Dodgers starting rotation was supposed to be too deep to lose a playoff series. But frankly, they weren’t deep enough, and lacked the dominant frontline starter that fans had been bellowing about all season. That’s why they were so disappointed the team didn’t make a splash for Luis Castillo at the trade deadline. It’s not like they needed him in the regular season, they needed him for this moment.

But as much as you can point blame on the Dodgers, you also have to tip your cap to the Padres. Their superstars Manny Machado and Juan Soto played better than the Dodgers superstar trio of Mookie Betts, Trea Turner, and Freddie Freeman. Trent Grisham is having the kind of postseason that Cody Bellinger was supposed to have, and the Padres bullpen was just plain better.

Rain delayed the start by 30 minutes, but maybe it was foreshadowing. The baseball Gods had come to rain on the Dodgers decade of dominance over the Padres.

In last year’s NLDS, the Dodgers turned to their big-game pitcher Walker Buehler with their backs against the wall. But Buehler is on the injured list after undergoing a second Tommy John surgery so instead they turned to—checks notes—Tyler Anderson?

That’s right, the Dodgers best free agent signing of the offseason and one of their six All-Stars this season. At 32, Anderson has only started two playoff games in his career. The first, he was a one-inning opener, but the second, was in the NLDS in 2018 with the Colorado Rockies. Anderson allowed just one run in six innings in that game.

Little did he know, that would be the experience he would draw from four years later in a do-or-die elimination in Game 4. Anderson dominated the Padres on Saturday night, allowing just two hits, with two walks, and six strikeouts over six shutout innings.

But pitching hadn’t been the problem for the Dodgers this series. It’s been the offense.

Heading into Game 4, the Dodgers had gone 19 consecutive at-bats without a hit with runners in scoring position. That streak extended to 20 after Will Smith stranded Freddie Freeman at second base to end the top of the first inning.

But even on the brink of elimination, and with a 20 at-bat hitless streak with RISP, the Dodgers offense looked confident and coordinated in their approach at the plate.

Mookie Betts worked a one-out walk in the third inning. Trea Turner followed with a double down the left field line, and Freeman finally broke the streak with a two-run double down the right field line that gave the Dodgers a 2-0 lead.

They would tack on one more run with a sacrifice fly in the top of the 7th, but with runners on second and third base and one out, they failed to get the big hit–again–that would have broken the game open. Instead, the Padres broke it open a few minutes later.

The Dodgers were the superior team on paper. They defeated the Padres 14 out of 19 times in the regular season. None of that mattered over a five-day stretch in October.

The Padres knack for elevating their play once the postseason began is commendable. The Dodgers consistency in doing the opposite nine out of the last ten years, is not.

Before the season began, Dodgers’ manager Dave Roberts audaciously predicted that they would win the World Series this year.

The Dodgers can drive home now, replaying the last three games in their head as their bus travels back up the 5 freeway to Chavez Ravine. When they arrive back at Dodger Stadium, one thing is for certain. They will not be playing baseball there. Not this year anyway.

In the years to come, the Padres’ accomplishment may grow to the stuff of legends. The Dodgers won 111 games—the second highest total in National League history.

That let set in for a second. They crushed their opponents by huge margins and had the largest run differential (+334) in National League history. The Padres were three loses away from missing the playoffs entirely.

Meanwhile, the Dodgers will be remembered in the same way as the 2011 Mariners: As one of the biggest disappointments in postseason history. The Mariners at least won a playoff series, the 1954 Cleveland Indians, who also won 111 games, made it all the way to the World Series before their collapse. The Dodgers only lasted four games.

It’s true the Dodgers were under the most pressure. After winning 111 games, it would be all for naught if they didn’t win the World Series, right?

Now we have the answer.

Bearing the burden of being the best team in baseball for the last seven months simply got to the Dodgers. When Josh Hader was on the mound for the ninth, the Dodgers were mentally already booking their flights to Cancun for the rest of the winter.

The Padres will now play the Phillies for the National League pennant.

As the Dodgers stood stunned watching their rivals to the south celebrate, I looked around and thought to myself the city of San Diego has suffered a lot. They lost their football team, they lost the division, and they had never seen a playoff win at Petco Park before Friday. Now, they are just four wins away from the World Series.

This new playoff format, expected to reward the teams with a first-round bye, instead doomed them. The 89-win Padres and 87-win Phillies will now square off with a chance to go to the World Series while the 100+ win Mets, Braves, and Dodgers watch from their couch.

The Dodgers have been to the postseason 10 straight years. That’s regularly enough that the consistency of getting into the tournament is simply no longer enough. The dreaded narrative that the Dodgers, “can’t win the big one,” is no longer fallacy, but reality. They really have become the Braves of the 1990s.

The Dodgers are not a dynasty, but a dud.