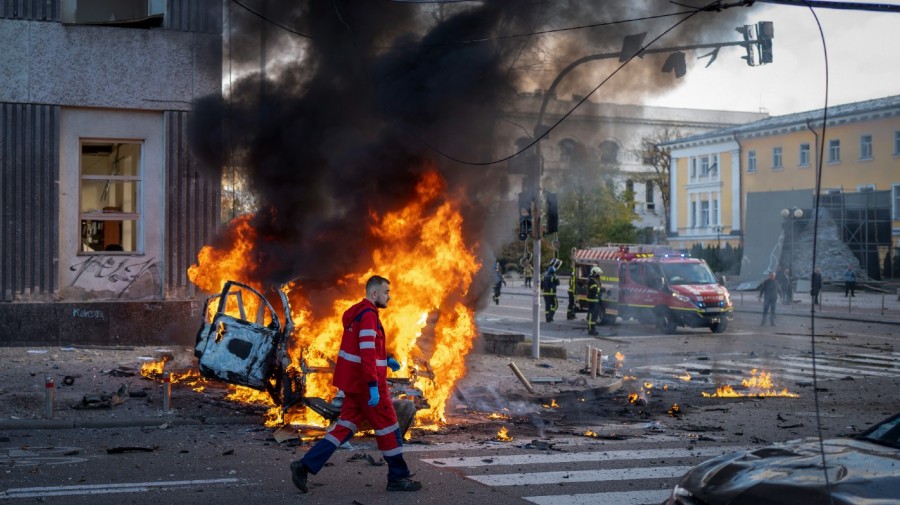 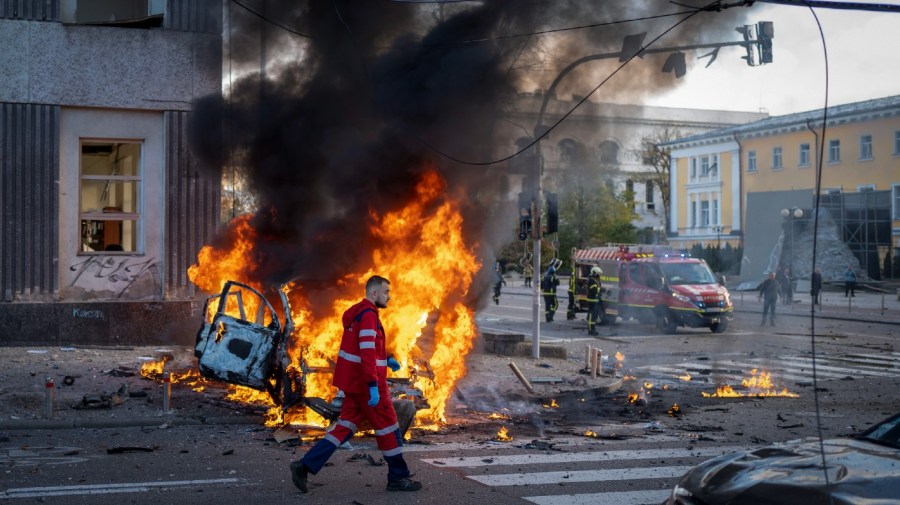 Russia’s air strikes on civilian targets across Ukraine this week are the latest sign that Russian President Vladimir Putin is inclined to escalate the war amid mounting losses on the battlefield and rising criticism at home. But NATO is pushing back with a renewed pledge to “step up and sustain support” for Ukraine.

We’ll share news on the latest strikes and other acts of Russian aggression and the international response, plus the Army’s top civilian’s call for service members to stay out of “culture wars,” and the latest on where the annual national defense policy bill stands.

This is Defense & National Security, your nightly guide to the latest developments at the Pentagon, on Capitol Hill and beyond. For The Hill, I’m Ellen Mitchell.

How strikes show Putin will stick with Russia’s hawks

The Kremlin has promoted military leaders known for their brutality, ramped up troop deployments, and is once again calling to “completely dismantle” the government in Kyiv in the latest signs that Russian President Vladimir Putin is inclined to escalate the war.

However, while Putin is attempting to signal an escalation in Ukraine to appease hawkish elements in Russia, experts said it’s unlikely his current actions or posturing will slow Moscow’s losses or Kyiv’s momentum.

“Putin is losing and that is causing him to escalate in some ways, kind of as a defensive measure,” said Jeffrey Pryce, a senior fellow with the Foreign Policy Institute at Johns Hopkins University’s School of Advanced International Studies.

Upping the air strikes: Putin followed through on his threat of “harsh” retaliation this week after an explosion destroyed a section of a bridge connecting Russia and the occupied Crimean Peninsula, which Putin personally opened in 2018.

A barrage of air strikes on Monday hit more than a dozen cities, killing at least 19 people and injuring more than a hundred. The U.N. human rights office described the attacks as “particularly shocking” and amounting to potential war crimes.

Russia continued its strikes into Tuesday, launching two more series of strikes in the morning, firing 28 cruise missiles at its neighbor, Ukraine’s Ministry of Defense announced.

The bridge explosion was the latest embarrassment for Putin, coming after Ukrainian counter-offensives that have liberated occupied areas in the northeast and south.

On Saturday, the Defense Ministry appointed Gen. Sergei Surovikin to lead what the Kremlin is still calling its “special military operation” in Ukraine.

Russian military analysts say Surovikin brings a long track record of corruption and brutality — and human rights groups have said he bears responsibility for many of the atrocities committed by Russian forces he led in Syria.

Troop mobilization: Putin’s mobilization of hundreds of thousands of military reservists last month was the clearest sign yet of his commitment to a long war in Ukraine.

Defense experts say any boost from the reinforcements won’t be felt for months, but the move has drawn fierce resistance at home, forcing Putin to make a rare admission of “mistakes” in its implementation.

NATO WILL ‘STEP UP AND SUSTAIN SUPPORT’ FOR UKRAINE

NATO Secretary General Jens Stoltenberg said the organization’s defense ministers will meet on Wednesday and Thursday to “step up and sustain support” for Ukraine as Russia launches a barrage of missiles at the country.

Stoltenberg gave a press conference on Tuesday ahead of the meeting, saying that the defense ministers will also review their progress in strengthening NATO’s defense and deterrence and work to increase their protection of NATO’s “critical infrastructure.”

Ensuring Ukraine’s defenses: He said NATO wants to ensure that Ukraine can continue to defend itself and liberate territory that Russia has captured during the war, noting its counteroffensives that have seen Kyiv retake thousands of square kilometers of territory in the past month.

Stoltenberg said Putin is failing in his attempt to conquer Ukraine while Russia is “increasingly resorting to horrific and indiscriminate attacks on civilians and critical infrastructure.”

Also from The Hill:

Army leader tells officers to stay out of ‘culture wars’

The Army’s top civilian is urging service leaders to stay out of the “culture wars” less than a month after it was revealed that the Army started an investigation into a top commander for sparring with conservative news hosts on social media.

Army Secretary Christine Wormuth said Monday that the service “absolutely” wants its general officers present on social media but said they should avoid getting drawn into “the inflammatory kind of environment that, frankly, Twitter really lends itself to.”

Keep out: “The key for senior leaders in an environment that is as politicized, unfortunately, as the one we’re all operating in is to exercise good judgement,” Wormuth said during a press conference at the annual Association of the U.S. Army conference in Washington, D.C.

“One of the things I think that’s most important to [Army Chief of Staff Gen. James McConville] and I is keeping the Army apolitical and keeping it out of the culture wars,” she added.

The Army’s thinking: Wormuth’s reasoning for the approach was tied to the fact that only a small fraction of young Americans are interested in serving, making it necessary for the Army “to be able to have a broad appeal” to reach recruitment goals.

“When only 9 percent of kids are interested in serving, we have got to make sure that we are careful about not alienating wide swaths of the American public to the Army,” she said.

An earlier controversy: Her comments follow a new Army inspector general investigation into Maj. Gen. Patrick Donahoe for alleged misconduct on social media after he faced off against a couple of Fox News hosts.

Donahoe, the former commanding general of the Army’s Maneuver Center of Excellence at Fort Benning, Ga., had his July retirement put on pause while the service finishes the investigation, the Army Times first reported on Sept. 19.

Donahoe was among a group of top military leaders who pushed back against comments that Fox News commentator Tucker Carlson made in March 2021 in which he said the Biden administration was “feminizing” the Army because of efforts to attract more women to join the military and uniform policy changes.

Alienated members: Asked on Monday what she would say to service members who are women or people of color who now feel that the Army doesn’t have their backs due to the response to Donahoe, Wormuth said she does not want any soldier to feel alienated.

“We always want to have the backs of our soldiers,” Wormuth added. “I think there are ways to do that that are more effective than others. … I think there is absolutely a way to stand up for our soldiers and have their back, but, again, I think the key really is tone and looking at your audience.”

Senators bring their version of defense bill to floor

“We are at a critical period in our nation’s security and this bill will help ensure our military has the tools and capabilities it needs to combat threats around the globe and keep Americans safe,” Senate Armed Services Committee Chairman Jack Reed (D-R.I.) said of the legislation on the floor during a quick procedural session.

Reed later said he is confident that the annual National Defense Authorization Act will be completed by the end of 2022, though there are still many issues to iron out to get to that point, Defense News reported.

“There’s always some friction, but we will get this bill done. We have to,” Reed said. “It’s one of the obligations that the House and Senate take very seriously. And we owe it to the troops.”

Differences: The Senate bill, which allocates $857 billion toward national defense spending in fiscal 2023, will need to be passed on the Senate side and then reconciled with the House’s draft of the legislation, passed in July.

In its version, the House authorizes nearly $840 billion in spending for defense.

Also from The Hill:

ON TAP FOR TOMORROW

That’s it for today! Check out The Hill’s Defense and National Security pages for the latest coverage. See you tomorrow!