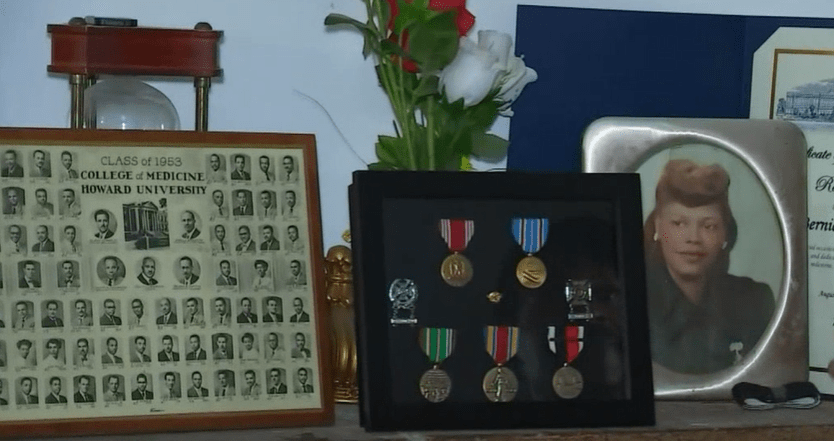 On Friday, a World War II veteran finally received the medals he earned more than 70 years ago.

“It’s my honor and privilege to be here today to award Dr. Strickland his medals which he earned over 70 years ago and are long overdue,” said Captain Daniel Lucero with the U.S. Army.

“He served his country at a time when the country didn’t necessarily give him the respect he was deserved,” Lucero said.

After the war, he put himself through college, graduated from Howard University’s medical school, then moved to Los Angeles to practice medicine.

It wasn’t until his children were starting college that he looked into accessing his veteran’s benefits.

That’s when he discovered his military records had been destroyed in a fire in 1973 and there was no record of his service.

“He never spoke of his service. I never knew this and this is amazing and it’s a tribute to his character,” said Maurice Cox, a neighbor.

Dr. Strickland celebrated his 100th birthday this year, and that propelled his son to reach out to congresswoman Nanette Diaz Barragán to right the wrong.

“Your service is not lost on us. it’s a little late but it’s never too late to recognize you for your service,” Barragán said.

Those who know him well say he’s a hero on so many levels, including as the doctor to this neighborhood.

“He actually delivered me because I lived across the street,” Cox said.

Dr. Strickland turned down opportunities to practice medicine in wealthier areas, saying he wanted to serve his own community.

Dr. Strickland’s son was overwhelmed with gratitude for his father’s long overdue recognition.