Will the Midterms be a “Wave” Election–and Does It Matter? 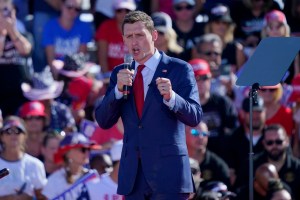 “Democrats, on Defense in Blue States, Brace for a Red Wave in the House,” blared The New York Times, while Axios is on “Red Tsunami Watch.” Meanwhile, The Cook Political Report upped its estimate of House Republican gains from 10–20 seats to 12–25 seats.

That would be more than enough for Republicans to claim control of the House. But would a net gain of 25 seats constitute a “wave”? How big does the number have to be? What even is a wave, anyway?

Although analysts and scholars have offered some qualitative standards, no consensus definition of a wave exists. For example, in 2014, the political analyst Stuart Rothenberg said, “It is one in which momentum is built up on one side that washes ashore candidates who otherwise wouldn’t win. Second-tier candidates. Longshots.” In 2016, the political science professor Jacob Smith defined it as “a congressional election that (1) produces the potential for a political party to significantly affect the political status quo as (2) the result of a substantial increase in seats for that party.”

And we have some roughly quantitative standards. The political science professor Alfred J. Tuchfarber wrote in 2014 that the “semi-formal definition” is a gain of “20 or more seats” in the House. (Though he also criticized that number as too high a bar in “an era with fewer and fewer contested House seats” and noted that “elections that do not meet the 20-seat metric do at times result in substantial public policy and political change.”) Amy Walter of the Cook Political Report suggested in 2018 that a wave happens when “the party out of power picked up significantly more seats than they needed to win control” and “the winning party is going to win competitive seats by huge margins.” With Republicans this year only needing a net gain of five House seats for a majority, 15 new seats, give or take, could meet the benchmarks set by Tuchfarber and Walter.

However, a 2018 study by Smith and Rob Oldham sets a higher numeric bar for a wave election: “the 20 percent of elections where the president’s party lost the most seats during the last 100 years.” By that definition, a party would need a net gain of at least 48 House seats to crack into the highest quintile.

Allow me to put one more quantitative standard on the table for consideration, one specific to midterm elections: Since the president’s party almost always loses House seats, the party out of power should net an above-midterm-average number of seats.

For midterms after the Great Depression and World War I (once the Democratic supermajorities of the prior decade subsided), the average gain was 26 seats—just about the 25 that is presently considered the upper bound of the Cook forecast (though as the FiveThirtyEight projection chart shows, Republicans have the potential to perform well above or below Cook’s expectations). So, while a gain in the mid-20s may meet some definitions of a wave, it would be a typical midterm result.

Moreover, we are not living in typical times. If we look at just the past four midterms, the average gain for the party out of the White House is 37 seats, and the House gavel has changed hands in three of those four elections, with Democrats gaining 30 seats in 2006, Republicans gaining 63 in 2010, and Democrats gaining 41 in 2018. Senate control has also shifted in 2006, 2014, and 2020.

Historically, such instability is highly unusual. Democrats—adding northern New Leaders to their southern Dixiecrat base after the Great Depression hit—had a nearly unbroken streak of House control from 1932 to 1994, only losing the 1946 midterm in that Republican wave year. Then, once southern conservatives recoiled at President Bill Clinton’s activist agenda and abandoned their long-running ties to Democrats, Republicans held the House for a 12-year streak—with barely any change in the House’s partisan composition after the 1998 and 2002 midterms.

Tuchfarber argued in 2014 that a 20-seat standard is too high because of the “deep partisan divide, increasing voter polarization, gerrymandering [and] legislative protection of incumbents.” But the recent big swings belie that assertion. Cascading crises—the Iraq War, the Great Recession, the rise of Trumpism, the COVID-19 pandemic, Russian imperialism, and inflation—sparked volatility.

Any stabilizing effect from ossifying partisan loyalties has been outmatched by the influence of intermittently engaged ideological voters and chronically dissatisfied swing voters. As the political scientist Ross K. Baker observed in the run-up to the 2014 midterm, with the scarring effects of the Great Recession still weighing on many, voters “are more sullen than rebellious. In large part, that is because they don’t know which party to blame.”

In this volatile period, a Republican House gain in the mid-20s isn’t anything special. A fourth House flip in five midterms? That’s not a stunning wave. That’s just another election in these unfortunately interesting times.

Whether or not the upcoming election meets the definition of a wave may seem like a semantic exercise. But it will be part of answering two questions: Did the Democrats screw up? Was this a referendum on their performance that they lost?

No one can seriously argue that Democrats batted a thousand in the past two years, because no party in power ever does. But, as I noted back in August, professors Joseph Bafumi of Dartmouth, Robert S. Erikson of Columbia, and Christopher Wlezien of Temple concluded that midterms are not primarily referendums on presidential performance. While the president’s party almost always loses House seats, they wrote, “majorities [of voters are] typically ‘approving’ the president’s performance at midterm,” and therefore, “it is difficult to claim that the presidential party’s typical poor showing in midterm elections is due to voter disillusionment with how the president is handling the job.” They argued that midterm electorates have a natural desire for “balance,” regardless of presidential job approval, and almost always put “their collective thumbs on the scale in favor of the out party at midterm [to] move policy back toward the center.”

The Democratic hope for defying historical patterns come November 8 still rests on being seen as the balancing force—the party that protects democracy, saves reproductive freedom, and maintains economic growth. But the current data indicates that, in an era of constant crisis, the midterm electorate’s thirst for balance remains perpetually unquenched, compelling them to flip the House over and over and over.

While common, losing a “balance” election doesn’t automatically exonerate Joe Biden and the Democrats. Sometimes, as in 2008, 2014, and 2020, the voter frustrations expressed in the previous midterms remain unaddressed and carry over to the next presidential election. Other times, presidents needed a couple more years to show that they were effective stewards of the country and national security. Ronald Reagan, Bill Clinton, and Barack Obama suffered job approval ratings below 50 percent two years into their terms, suffered midterm losses, and recovered in time for reelection.

Whether Biden needs more time or whether Democrats require a more dramatic course correction is a looming debate that will probably soon explode all over our social media feeds and cable TV screens. But a loss of the House or even the Senate by themselves should not adjudicate that debate, especially when we live in an era when midterm waves aren’t unusual. They are a symptom of a deeper unease.

The post Will the Midterms be a “Wave” Election–and Does It Matter? appeared first on Washington Monthly.