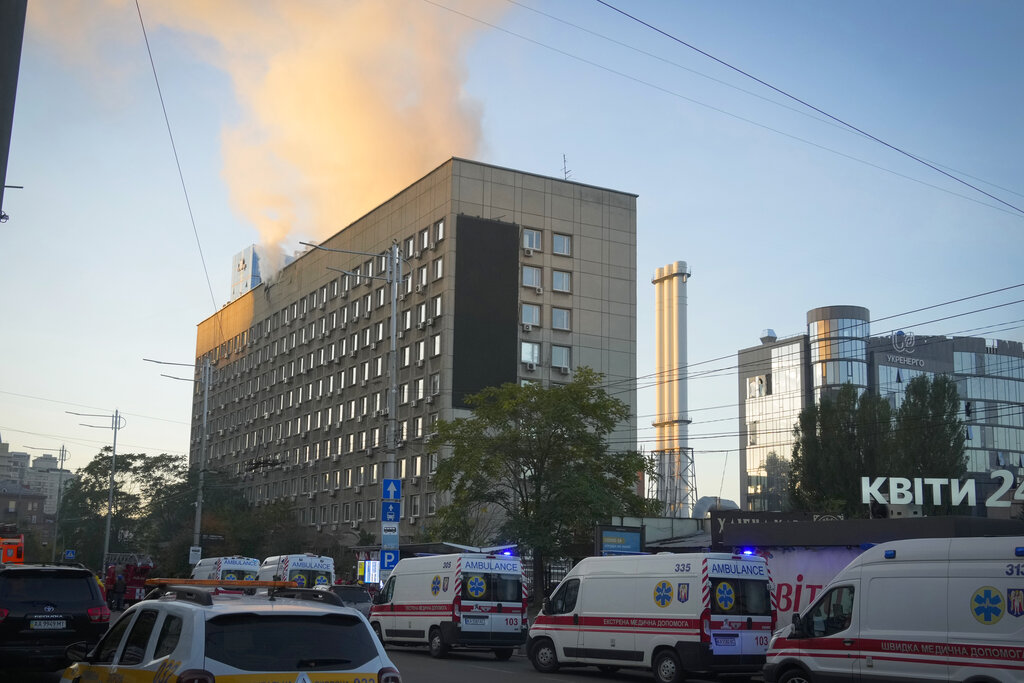 Even in a city that has become grimly accustomed to air strikes since Russia launched its invasion in February, such a concentrated use of drones sowed terror and frayed nerves, with people nervously scanning the skies as they sought shelter.

Exactly how many drones nose-dived into the capital wasn’t immediately clear. Drones used in the attack appeared to include Iranian-made Shaheds. Previous Russian air strikes on Kyiv were mostly with missiles.

In the Kyiv region alone, 13 or more drones were shot down, all of them as they flew in from the south, said a spokesman for the Ukrainian Air Force, Yurii Ihnat.

Other drones got through. The capital’s central Shevchenko district was among the areas hit, with apartment blocks damaged and a non-residential building on fire, Kyiv city Mayor Vitali Klitschko said. He said 18 people were rescued from the rubble of one apartment building and that rescue workers were trying to extract two other people known to be under the debris.

An Associated Press photographer who was out shooting morning scenes of Kyiv caught one of the drones on camera, its triangle-shaped wing and pointed warhead clearly visible against the blue sky. Drones came in several waves and buzzed overhead with angry hums from their engines.

There was no immediate word of casualties. The drones’ intended targets weren’t immediately clear but Russian air strikes over the past week have hit infrastructure, including power facilities. One drone that hit an apartment building caused at least three apartments to completely collapse and left a gaping hole. Rescue workers scrambled on the rubble searching for victims amid gray smoke.

“The whole night, and the whole morning, the enemy terrorizes the civilian population,” Ukrainian President Volodymyr Zelenskyy said in a social media post. “Kamikaze drones and missiles are attacking all of Ukraine.”

“The enemy can attack our cities, but it won’t be able to break us,” he wrote.

Social media video posts showed drones buzzing over the capital and smoke billowing in the early morning light. The sound of sustained gunfire could also be heard in one post, seemingly trying to shoot a drone down.

The Iranian-made Shaheds, which Russia has rebranded as Geran-2 drones, pack an explosive charge and can linger over targets before nosediving into them. They can be fired one after the other from racks. Their distinctive A-shaped wing make them readily identifiable. Andrii Yermak, the head of the Ukrainian president’s office, also confirmed in a social media post that Shahed drones were among those used in the strike on Kyiv.

Iran has previously denied providing Russia with weapons, although its Revolutionary Guard chief has boasted about providing arms to the world’s top powers, without elaborating.

The drones have also been repeatedly used by Russia elsewhere in Ukraine in recent weeks to target urban centers and infrastructure, including power stations. They are comparatively cheap, costing in the region of US$20,000, and can be used in swarms.

Their numbers present a challenge to Ukrainian air defenses, said Ihnat, the Air Force spokesman. Some air defense weaponry supplied by Western nations can only be used during daylight hours when targets are visible, he added.

Western nations have promised to bolster Ukrainian air defenses with systems that can shoot down drones, but much of that weaponry has yet to arrive and, in some cases, may be months away.

“The challenges are serious, because the air defense forces and means are the same as they were at the beginning of the war,” Ihnat said.

Strikes in central Kyiv had become a rarity in the last several months after Russian forces failed to capture the capital at the beginning of the war. Early morning strikes last week were the first explosions heard in Kyiv’s city center in several months, and put Kyiv as well as the rest of the country back on edge. Monday’s blasts seemed to continue what many fear could become more common occurrences in urban centers.

Russian President Vladimir Putin said last week’s strikes were in retaliation for the bombing of a bridge connecting the Crimean peninsula with the Russian mainland. Putin blames Ukraine for masterminding the blast, which suspended traffic over the bridge and curtailed Moscow’s ability to use the bridge to supply Russian troops in the occupied regions of southern Ukraine.

The strike on Kyiv comes as fighting has intensified in the eastern regions of Donetsk and Luhansk in recent days, as well as the continued Ukrainian counteroffensive in the south near Kherson and Zaporizhzhia. Zelenskyy said in his Sunday evening address that there was heavy fighting around the cities of Bakhmut and Soledar in the Donetsk region. The Donetsk and Luhansk regions make up the bulk of the industrial east known as the Donbas, and were two of four regions annexed by Russia in September in defiance of international law.

On Sunday, the Russian-backed regime in the Donetsk region said Ukraine had shelled its central administrative building in a direct hit. No casualties were reported.