Tom Brady did not come back to be average 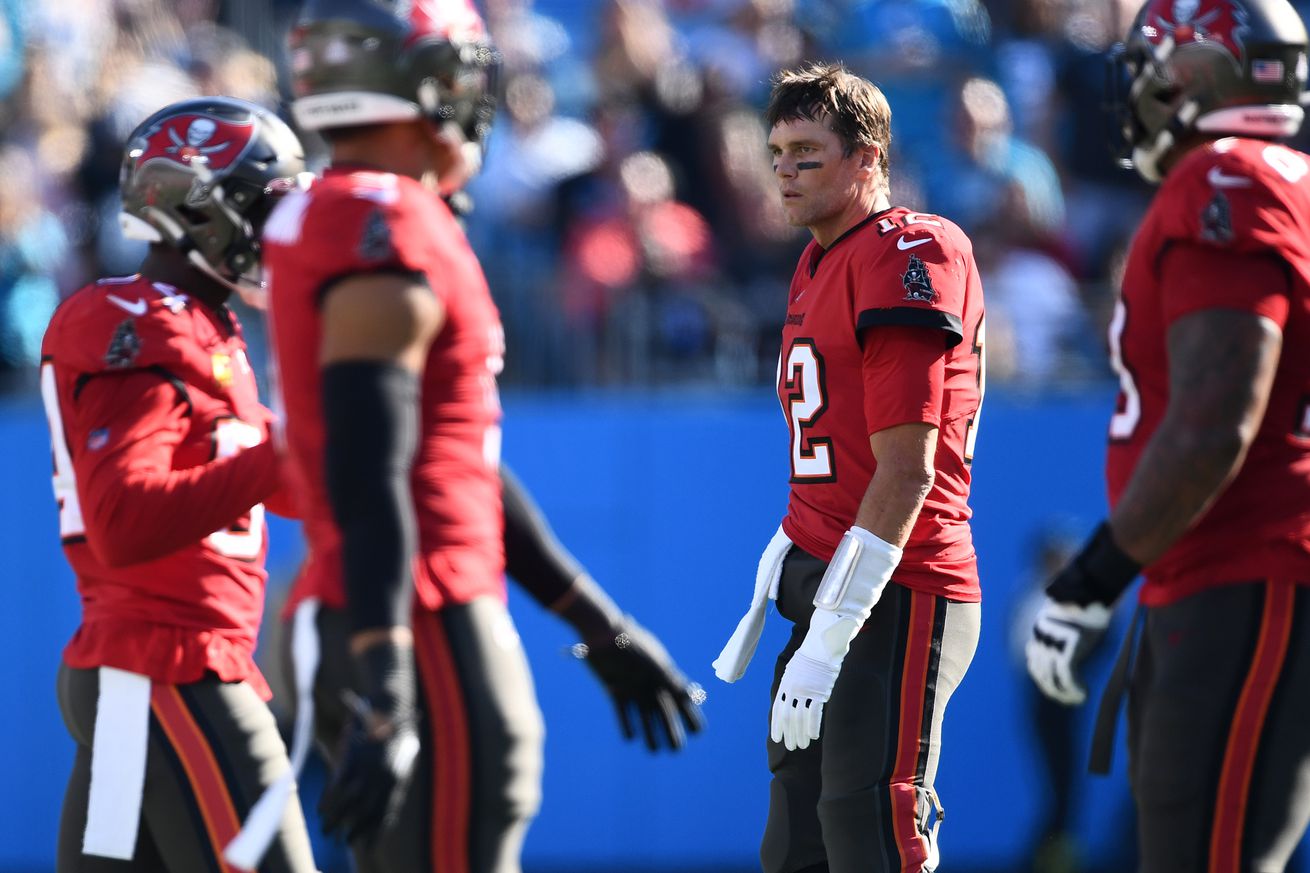 Brady and the Buccaneers are underwhelming right now, is this truly how it ends?

A few weeks ago, we explored the reasons behind Tom Brady’s surprising decision to unretire.

We talked about love of the game, the routine of football, and even spite. Ultimately, however, Brady’s decision to step away from the field came down to the same thing that made him one of the greatest quarterbacks ever to play the game:

His unflinching desire to be the best, and to prove everyone wrong along the way.

Nowhere in that piece did we discuss the idea that Brady came back to be an average quarterback, because that is not who he wants to be.

Through seven games this season, however, that is what he is.

Brady and the Tampa Bay Buccaneers lost in stunning fashion to the Carolina Panthers on Sunday, by a final score of 21-3, and now the quarterback and his team are searching for answers.

As interested parties search for answers, one common theme is that Brady is not getting a lot of help. Early in the loss to the Panthers, Brady uncorked a deep ball in the direction of a wide-open Mike Evans, but the receiver failed to haul in the throw. Instead of a long touchdown to give the Buccaneers an early lead, it was just another incompletion:

According to Next Gen Stats, Evans was as open as it gets on the play:

According to NFL Next Gen Stats, Mike Evans had 10.9 yards of separation to the nearest defender on his drop in the first quarter.

That’s the most wide open drop on a pass travelling at least 30 air yards this season. pic.twitter.com/Fk5m7pO1RX

However, that is just one play. One throw out of the 49 Brady attempted on the day. As Brady himself pointed out, there was a lot of football left to be played:

QB Tom Brady on WR Mike Evans’ early-game drop: It was one play. There were a lot more plays in the game.

Another common theme is that Brady is being let down by the offensive line, and in particular injuries to that group. When starting center Ryan Jensen went down during training camp, many stories were written — including at least a few by yours truly — outlining how quick, interior pressure is an Achilles’ Heel for all quarterbacks, but in particularly Brady.

The film, and the data, support the proposition that Brady is struggling this season when pressured. According to Pro Football Focus charting data, Brady has an Adjusted Completion Percentage (ACP) of 56.8% this year when pressured, which places him 29th in the league among qualified passers.

Where this thesis falls apart, however, is when you dig a little deeper. Brady’s struggles when pressured are not a new phenomenon. Last season, a year that saw Brady play at an extremely high level, the veteran quarterback posted an ACP of 57.9% when pressured, placing him 33rd in the league.

During his first season in Tampa Bay, one that ended with his seventh Lombardi Trophy, Brady posted an ACP of 54.1% when pressured, placing him 36th in the NFL among qualified passers.

For comparison’s sake, during the 2016 season while he was with the New England Patriots, Brady posted an ACP of 67.5%, which was sixth among qualified passers.

So, a natural counter to this is something along the lines of: “Well, if this is who Brady is right now, a quarterback who struggles when pressured, Tampa Bay and offensive coordinator Byron Leftwich have to do everything they can to keep him clean in the pocket, and they are not doing that right now.”

So, there has not been a marked increase in pressure this season, but the results continue to lag from Brady when he is pressured. Remember, last year Brady was playing at an MVP level, even when putting up these numbered when he was rushed in the pocket. Here are his efficiency numbers from last season, viewed through Expected Points Added (EPA) and Completion Percentage Over Expectation (CPOE):

There is Brady, in the upper-right quadrant where you want to be, with the third-best EPA/Play among quarterbacks last season, behind only Aaron Rodgers and Patrick Mahomes.

Now we can look at the efficiency metrics from this season:

Not the Brady we are used to seeing.

Now, there are still moments where Brady rips a throw into a tight window and you think to yourself, “there he is, he’s back.” Like this throw against the Pittsburgh Steelers last week that finds Brady splitting the safeties on a completion to rookie tight end Cade Otton:

Or even this throw to Evans from Sunday, attacking a single-high coverage with a seam route with all the velocity necessary to beat the free safety:

Another example from Sunday is this completion to Otton, almost a mirror image of the play against the Steelers:

The problem for Brady and the Buccaneers right now is that these plays are no longer the norm from this offense, but the exceptions. Relying on exceptions to finish drives with touchdowns is often a losing proposition in the NFL. For example, after Brady connected with Evans on that seam route, the Buccaneers eventually drove deep into Carolina territory, facing a 1st and goal from the 8-yard line.

Three straight incompletions forced Todd Bowles to send in his field goal unit. An interesting proposition down 14-0 early in the fourth quarter, but Bowles probably just wanted to make sure of points in that situation. On first down, Brady and Russell Gage failed to connect on a quick out route, and on second down Brady and Evans were not on the same page, and the receiver came up hobbling after getting tangled up with the defensive back.

There is a window here for Brady to hit Gage in the back of the end zone, on this three-receiver concept the Buccaneers dial up to the right side of the field. But Brady, feeling a bit of pressure off the left edge, pulls the football down instead of making an anticipation throw to the back corner. The eventual throw falls incomplete, bringing the field goal unit onto the field.

Now, what happened after the long completion to Otton? How did that drive end?

Well, watch Brady’s feet on this fourth-down attempt, his final play of the game:

It is often said that the best way to tell how a quarterback is playing, how he is feeling, is to watch his feet. If it was good enough for Bill Walsh, it is good enough for me. Brady looks uncomfortable on this snap. His feet are all over the place, and this is not the fluid footwork we are used to seeing from him. He looks uncomfortable, he looks flustered … he looks … average.

Is this truly how it ends? With Brady an average quarterback on a losing team?

Years ago, Tom Brady Sr. talked about how things “end,” and while he was referring to how aging stars often finish their careers with different teams when he talked about how it often ends “badly,” those words seem prescient at the moment. We are in uncharted water with Brady, watching a quarterback at the age of 45 try and navigate life in the NFL and remain playing at an elite level.

Whether this is really how it ends for Brady remains to be seen. I’m old enough — months older than Brady in fact — to remember previous discussions of “endings” and “cliffs.” I’m reminded of the 2014 season, and a Patriots’ loss to the Kansas City Chiefs that had many in the Boston media asking Bill Belichick if a quarterback change was needed.

That was the “[w]e’re on to Cincinnati” game for those wondering.

Brady has faced these questions before, both in New England and even in Tampa Bay. Let’s not forget, during the 2020 season the Buccaneers were on the wrong end of a loss to the Chiefs in Week 12, one that dropped them to 7-5 entering their bye week and had many wondering what was wrong in Tampa Bay.

They would not lose again.

Brady and the Buccaneers have three games until their bye week, winnable contests against the Baltimore Ravens, the Los Angeles Rams and the Seattle Seahawks, all three of which are at home. Tampa Bay sitting at 6-4 entering the bye week might just quell the talk of cliffs and endings.

Anything else, however, might just fan the flames of endings even more.

Brady did not come back to be average.

He has three weeks to prove he and the Buccaneers are not.