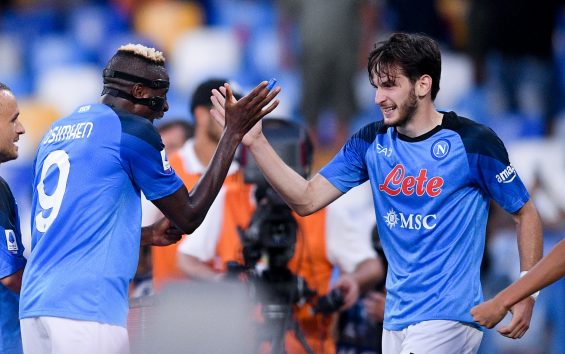 Napoli winger Khvicha Kvaratskhelia is attracting interest from all top clubs around Europe and Tottenham were quoted €30m for him back in 2020.

Kvaratskhelia has emerged as one of the brightest talents in Europe this season. The Napoli winger has played a pivotal role in a team that are unbeaten in all competitions since April.

Understandably, after impressing for Napoli in both Serie A and the Champions League, Kvaratskhelia is attracting interest from clubs around Europe.

Now, Fabrizio Romano has spoken about the future of Kvaratskhelia, exclusively to CaughtOffside via his Substack column.

“Napoli have no plans to sell Khvicha Kvaratskhelia. They’re really happy with him at this moment after an excellent start to the season,” said Romano.

Selling one of their key players so soon after he joined the club wouldn’t make too much sense, and at the age of just 21, the Georgian international is only at the beginning of his career.

“All the top European clubs are following him at the moment but there are no talks or advanced discussions. Tottenham wanted to sign Kvaratskhelia back in 2020 but the price tag was €30m before the war in Ukraine,” added Romano.

There’s no doubt that Kvaratskhelia would be worth a lot more than €30m if you wanted to buy him nowadays, so Tottenham may be regretting passing up on the chance to bring him to North London.

If he continues his impressive form over the next few seasons, it wouldn’t be a surprise to see concrete interest coming from some of the biggest clubs in Europe.

The post Revealed: Napoli star attracting interest from all top clubs with Tottenham quoted €30m in 2020 appeared first on CaughtOffside.