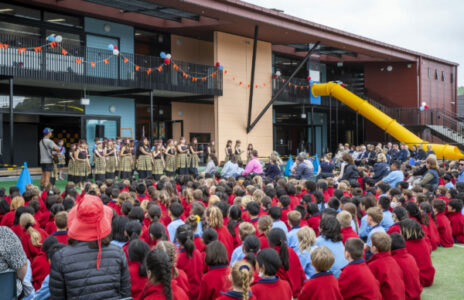 After beginning the project more than three years ago, Owairoa Primary School has officially opened its new 18-classroom block.

The celebration of the new development was marked by the cutting of the ribbon by Pakuranga MP Simeon Brown and newest student Frankie Collings on Thursday afternoon.

Guest speakers for the event included regional asset manager for the Ministry of Education David Bos, past member of the Owairoa Primary School Board Bruce Howard and Brown, who also unveiled a special plaque celebrating the event.

The $13 million building, funded by the Government, was named the Alan McIntyre Centre in recognition of the 32-year serving current principal.

More than half the school student population (492 students) and 18 staff will use the new building.

The event programme culminated in two ‘spidermen’ appearing and abseiling from the two-storey roof to give the MP and Frankie the ribbon.

Confetti cannons added a final touch with glitter exploding everywhere, to loud cheers and excitement of the 1000-strong audience.