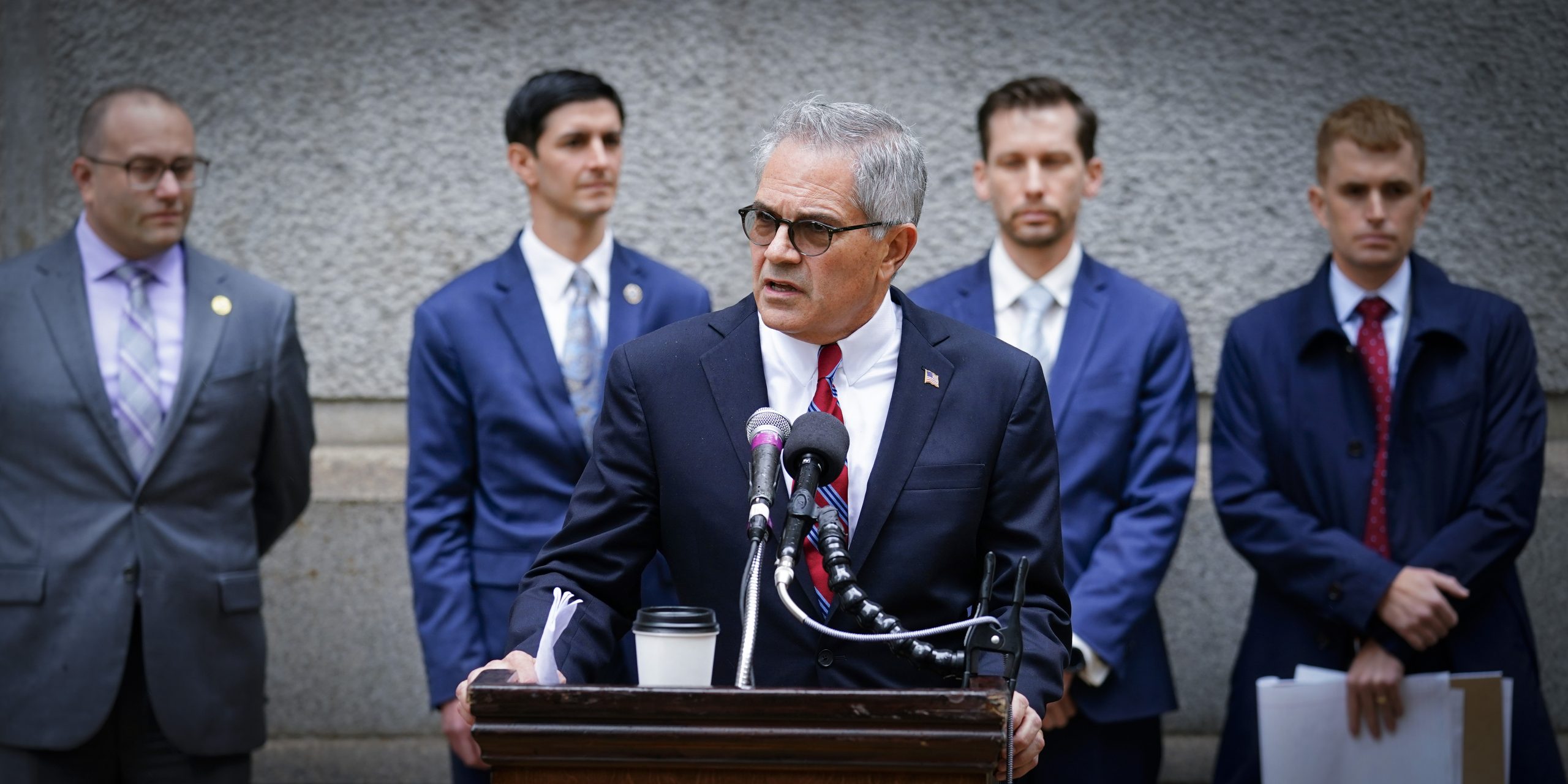 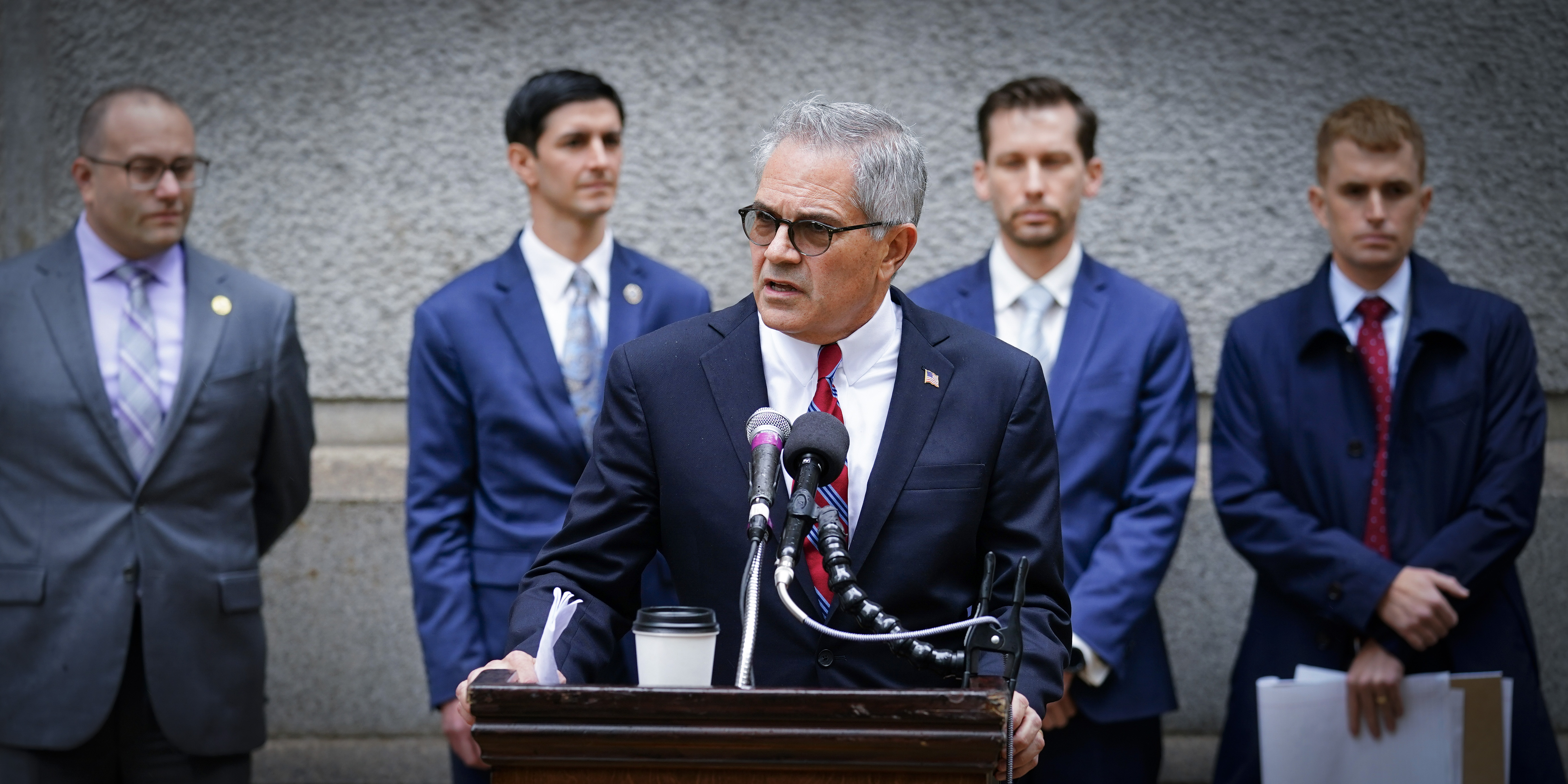 Lawmakers in Pennsylvania seeking to impeach Philadelphia District Attorney Larry Krasner released a new report Monday whose findings rely partially on a widely criticized study written by a former Republican district attorney. The interim report, which reads as a bill of particulars against Krasner, was handed down without a widely expected official recommendation to impeach the progressive district attorney.

The study in question, which was peer-reviewed and published in August by the journal Criminology & Public Policy, claimed that Krasner’s policy of “de-prosecution” was associated with a statistically significant increase in murders in Philadelphia, compared to the rates recorded under his predecessors. The study, by Thomas Hogan, an adjunct fellow at the Manhattan Institute who served two terms as a tough-on-crime prosecutor in Chester County, Pennsylvania, engendered harsh criticisms among social scientists who said the quantitative methodology of the study was undermined by its flaws.

“People who are serious about solving and preventing crime should look at serious and accurate research.”

“People who are serious about solving and preventing crime should look at serious and accurate research, not politically motivated documents like Hogan’s,” said Jessica Brand, a spokesperson for Krasner’s office who also leads the Wren Collective, a firm that advises reform-minded prosecutors. “People’s lives, after all, are at stake.”

Hogan did not immediately respond to a request for comment on the specifics of allegations from Krasners office, but told The Intercept he had no contact with the state House committee. “Philadelphia cut felony and misdemeanor sentencings by 70% from 2015-19, so it should come as no surprise that this de-prosecution tactic had an effect on homicides. I encourage you to read the complete article and responses,” he said in an email, reiterating his study’s findings. “I will have no further comment.”

A Pennsylvania House vote on whether to impeach Krasner will likely take place this week.

Hogan’s study formed almost the entire basis of what the committee outlined as one of four negative effects of Krasner’s policies on Philadelphia. “DA Krasner’s philosophies, and those of other progressive prosecutors across the country, have been widely criticized,” the committee’s report said. “For example, Thomas Hogan, a former prosecutor at the state and federal level, conducted a study entitled ‘De-prosecution and death: A synthetic control analysis of the impact of de-prosecution on homicides,’ in which he specifically focused on the de-prosecution of crime in Philadelphia pursuant to the adoption of progressive policies between 2015 and 2019.” The report went on to quote extensively from Hogan in a page-long summary of his study.

The study had come under attack almost as soon as it was released. “The broadscale de-prosecution policy of Philadelphia—particularly for firearm and drug trafficking offenses—appears to have a causal association with a large increase in homicides,” Hogan wrote in his study. “The public in Philadelphia will have to make a normative choice between a reduction in the number of prosecutions and an increase in homicides.” Hogan also suggested that the city of Philadelphia should consider whether to decrease the budget of the DA’s office in response to a decrease in prosecutions.

Scholars in the fields of criminology, sociology, and economic policy were quick to criticize the study and claimed that it had methodological issues and factual errors, including Hogan’s decision to count individual homicides rather than per capita homicide rates. In September, a group of scholars submitted an article to the same journal outlining what they described as “fatal flaws” in Hogan’s study and warning against its use to inform criminal justice policy. The authors also requested that Hogan share the data he used to produce his study, to which he did not reply. The journal rejected the paper. In a response published to his Substack, Hogan said the critique itself was based on flawed methodology.

“The flaws in the paper were apparent pretty quickly, to anyone with access to the data & familiarity with causal inference methods,” Jennifer Doleac, a professor of economics at Texas A&M University, wrote in a Twitter thread about Hogan’s paper. She also criticized the journal’s decision to reject the critique. “They discussed the main issues with the analysis (esp. flawed data cleaning & cherry-picking results) clearly & thoroughly. They show that correcting these issues produces a null effect on homicide.”

Two months later, state lawmakers used Hogan’s analysis to undergird the section of their report on the link between Krasner’s policies and homicides in Philadelphia as part of ongoing investigations by the House Select Committee on Restoring Law and Order. Earlier this year, Republican lawmakers who represent rural areas of the state spearheaded efforts to form the committee with the purpose of investigating Krasner’s office and determining what, if any, grounds exist to impeach him.

Monday’s report is the latest step in a series of yearslong efforts to curb Krasner’s power or remove him from office entirely — despite the fact that the progressive DA was overwhelmingly reelected a year ago. Krasner’s attempts to implement criminal justice reforms and address the underlying causes of mass incarceration have made him a target of lawmakers from both parties since his election in 2017. As removal efforts built steam among Republicans, state House Democrats joined the opposing party last month in voting to hold Krasner in contempt for his refusal to comply with a subpoena in the impeachment efforts. If successful, it would be only the third impeachment of an elected official in the commonwealth’s history.

Last week, the impeachment committee called on Krasner to testify in an appearance behind closed doors. But before his office had indicated whether he would appear, according to one source with knowledge of the process, the committee was drafting its recommendations to remove him. After Krasner’s office requested to testify publicly, the committee withdrew its offer.

Attacks against Krasner gained momentum as Republicans around the country pursued a midterm strategy of driving fears around crime. The political attacks place the blame for gun violence that has plagued both rural and urban areas on reform-minded prosecutors elected in liberal cities.

The report also included a quote from Krasner’s police-backed primary opponent in last year’s election, Carlos Vega. Vega was a homicide prosecutor in Philadelphia and among the 30 staffers whom Krasner fired in a house cleaning upon taking office. As part of its argument that a spike in homicides was due in part to Krasner having “purged the office of institutional knowledge,” the report quoted remarks Vega had made to Philadelphia Magazine in 2018 disparaging Krasner: “Carlos Vega, a former homicide prosecutor in Philadelphia, stated that ‘he felt bad for victims’ because ‘there aren’t many experienced prosecutors left in that unit, so this will be the blind leading the blind.’”