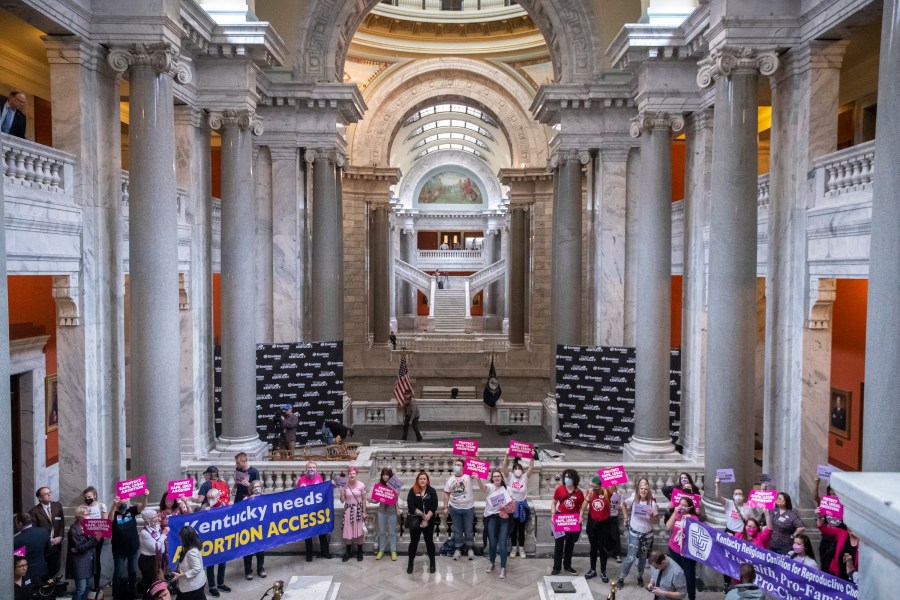 FRANKFORT, Ky. (AP) — The future of abortion rights in Kentucky reaches a defining moment Tuesday when the state’s highest court hears arguments over a sweeping abortion ban put in place by the Republican-led legislature.

The case before Kentucky’s Supreme Court is the first legal test since voters in Kentucky and three other states signaled their support for abortion rights in last week’s midterm election. Kentuckians rejected a ballot measure that would have denied abortion rights in the state’s Constitution.

“Its defeat –- at the least –- keeps alive the plaintiffs’ claim that the Kentucky Constitution protects a woman’s right to choose,” University of Louisville law professor Samuel Marcosson said ahead of the court hearing. “The outcome doesn’t establish that there is such a right; that remains a question for the court depending on their view of the scope of the Kentucky constitutional right to privacy.”

The Kentucky justices will review a challenge to the state’s trigger law that banned nearly all abortions, taking effect after Roe v. Wade was overturned in June by the U.S. Supreme Court. Approved in 2019, the law carved out narrow exceptions to save a pregnant woman’s life or to prevent disabling injury. There are no exceptions for rape or incest victims.

What impact, if any, the anti-abortion measure’s defeat will have on the Kentucky court was a matter for intense debate in the days leading up to the hearing.

Gov. Andy Beshear, a Democrat, expressed hope that the state’s highest court “will listen to the will of the people and know that the people have rejected extremism and rule accordingly.”

His chief nemesis, Republican Attorney General Daniel Cameron, whose office is defending the statewide ban in court, continued to claim there’s “no right to abortion hidden in Kentucky’s Constitution.” He said abortion policy should be left up to the state’s legislature, where GOP majorities have passed a series of anti-abortion measures in recent years. Cameron is among several Republicans vying to challenge Beshear’s reelection bid in 2023.

The hearing comes a week after abortion rights supporters won every state ballot question put before voters in the midterm elections. Michigan, California and Vermont voted to enshrine abortion rights in their state constitutions. Voters in Montana rejected a ballot measure that would have forced medical workers to attempt lifesaving measures in the rare event of a baby born after an attempted abortion.

In Kentucky, the abortion case wound its way through lower courts before reaching the Supreme Court as the referendum battle played out in the background. In July, a Louisville judge said the new, post-Roe abortion bans likely violate “the rights to privacy and self-determination” protected by Kentucky’s Constitution. Judge Mitch Perry said it was not the court’s role to determine whether the state Constitution contains the right to abortion, but whether the state’s restrictive laws violate freedoms guaranteed by its Constitution.

The near-total abortion ban was reinstated on an appeal to the intermediate state Court of Appeals. The state Supreme Court later opted to keep the abortion ban in place while it reviews the case, leaving abortions on hold in Kentucky and forcing women who can afford the procedure to look elsewhere. A separate six-week ban that Kentucky lawmakers approved also is being challenged by the two remaining abortion clinics in the Bluegrass State — both in Louisville, the state’s largest city — and would almost certainly be impacted if the justices determine that the state Constitution protects the right to an abortion.

A year ago, Kentucky lawmakers added the anti-abortion amendment to the 2022 general election slate as abortion foes hoped to cut off a legal path to restoring abortion rights. The measure would have declared the state Constitution didn’t protect the right to an abortion. Some thought the move would drive more conservative voters to the polls at a time before Roe v. Wade was overturned.

Now that the amendment has been defeated, the focus turns to legal arguments surrounding abortion rights. The stakes are seen as enormous as Kentucky’s justices prepare to hear arguments from both sides.

“If the state Supreme Court finds the Kentucky Constitution doesn’t limit the General Assembly’s authority to regulate abortion, then neither the U.S. nor the state Constitution would place limits on the potential abortion restrictions the legislature could enact,” Marcosson said. “This case is almost certainly the only realistic path to protecting abortion rights in Kentucky for the foreseeable future.”