How to get around in Belfast: from Glider and Metro services to bike rental schemes 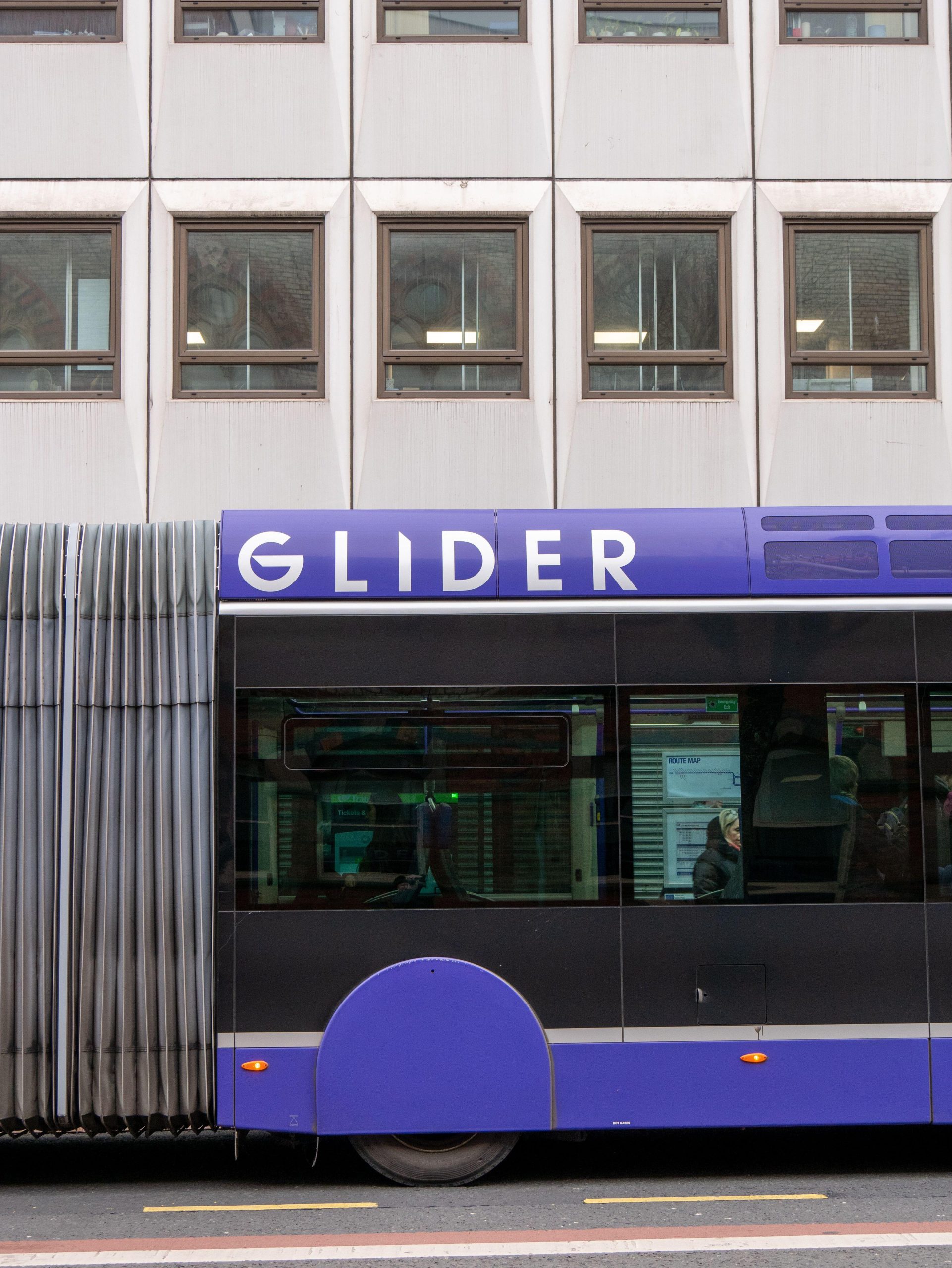 As a compact capital city, visitors will find Belfast mainly flat and pleasingly walkable. It’s also pretty well served by public transportation, so you can rely on Metro and Glider services instead of hiring a car. Exploring on Belfast Bike is often a better alternative to pricey taxis, too.

There is no underground rail network in Belfast, and limited suburban rail service, so the most common means to get around is by road. The city’s wide bus and bus-tram hybrid services may just get you everywhere you need to go.

There are express bus services from both airports

Belfast is served by two airports – Belfast International Airport and Belfast City George Best Airport. The former is older and more frequently served by a number of charter carriers to sunnier destinations, as well as a base for the airline easyJet in Northern Ireland. Belfast International is located approximately 13 miles northwest of the city, and the best way to get from the airport to the city is by bus on the Airport Express 300 service, which costs £8 or £11.50 return (within a month). Depending on traffic, this will get you to the Europa Buscentre in roughly 30 minutes.

Belfast City George Best Airport, which is named after world-famous footballer and Belfast boy, the late George Best, has a greater emphasis on connecting regionally to England and Scotland and is served by Aer Lingus, British Airways and Flybe, among others. As the name suggests, Belfast City Airport is closer to the city center, located only a few miles away from the Titanic Quarter. It is served by the suburban railway service into Sydenham railway station, which is about a 10–15 minute walk from the terminal building. The station requires the use of a footbridge, so isn’t recommended for people with mobility issues. A single ticket to Great Victoria Street station is £2. Alternatively, a bus service, the Airport Express 600, takes approximately 10 minutes to the Europa Buscentre (which is beside Great Victoria Street station) and costs £2.60. For private transfers, taxis are available from outside the terminal building, and the likes of Uber offer trips to the city center for around £10–£15.

You don’t need a rental car in central Belfast

If you’re staying in Belfast city center or its inner neighborhoods and solely looking to explore the city itself, hiring a car is not necessary. Even for day trips outside the city, careful planning of the public transportation options could be enough. However, if you want to explore more of Northern Ireland or the Republic of Ireland, you’ll appreciate the freedom of managing your own route and itinerary. In this case, it’s probably best to rent your own vehicle.

Metro and Glider services can get you moving around Belfast

This might appear quite confusing to visitors who see the word “Metro” on maps, but Belfast doesn’t have an underground metro and there are no plans for one to be built either. “Metro” refers to the city bus services, operated by Translink (the operator of public transport in Northern Ireland). Buses are pink, so are very difficult to miss, and a number of routes connect the city comfortably.

Complementing the bus service is the Glider, which is a relatively new option in the city, operating since 2018. In lieu of re-building a former tram network, the Glider is a two-route mass transit system that operates via long articulated buses, like a modern tram-bus hybrid. It uses diesel hybrid fuel, too, so is considered by Translink as a more sustainable transport option. The Glider benefits from dedicated bus lanes for most of the journey to ensure maximum reliability, and services are usually promptly at 10-minute intervals. Passengers will find USB chargers and wi-fi on board, and the two routes (G1, G2) go either east-west or from the city center to the popular Titanic Quarter, home of the SSE Arena, Titanic Belfast and Titanic Hotel.

There are a number of fare options for both the Metro and Glider services, which official websites lack clear information about. If purchasing single tickets, you’ll be prompted about whether that is to cover the “inner zone”, “extended zone” or “city zone”. The heart of the city is the cheaper inner zone (£1.60), then the city zone (£2.10) extends outwards towards Stormont in the east, or to Royal Hospital in the west, and beyond that comprises the extended zone (£2.50).

To avoid the complications of knowing where each zone starts and ends, a good value option is the off-peak day ticket which allows unlimited use on the entire network (both Glider and Metro services) after 9:30am for only £3. Download the Translink M Link app to store tickets on your smartphone, or purchase them from the machines at Glider stops.

There are two main stations in the city: Lanyon Place and Great Victoria Street. Lanyon Place is the terminus for the Dublin–Belfast “Enterprise” express service and is well-located for visits to Waterfront Hall, Victoria Square and St George’s Market. Great Victoria Street shares the same site as the Europa Buscentre. Trains from here can take you northwest towards Derry (Londonderry) and the pretty seaside spot Portrush on the north Antrim coast, east to Holywood and Bangor, and south in the direction of Moira and Balmoral. Great Victoria Street is nearer most of the main hotels and also slightly closer to the city center.

Generally, it’s easier to walk between the two main stations rather than hopping on a train unless you’ve timed it precisely – the train journey is eight minutes, but the walk takes just 20 minutes.

Explore the city center on foot or by bike

Central Belfast is walkable – it’s mostly flat with many pedestrianized spaces, particularly around the inner city center and shopping districts. A vast majority of the main attractions are within the heart of the city and you probably won’t find yourself walking for more than 20 or 30 minutes to most of them, for example from Crumlin Road Gaol to shopping at Victoria Square, or the Cathedral Quarter to Ormeau Park.

Like many other cities, there is a useful and affordable bike rental scheme called Belfast Bikes, with 30 stations throughout the city, including as far south as Ormeau Road and Queen’s University and as far east as Newtownards Road. Sign up for £5 and the pay-as-you-go option is £1 for 30 minutes.

Taxis ranks are found all over the city

Visitors will find dedicated taxi ranks dotted around the city and it’s best practice to always choose the vehicle at the top of the rank and enquire with them about your destination and a rough price in advance, as well as checking if they accept cards. Many drivers have digital payment options, but some don’t. If you plan to pay in cash, try to have as close to the fare available as possible, as the drivers may not carry enough change. You can also order directly from a local taxi company, such as Value Cabs, or book via a number of taxi apps.

Belfast city center is a mostly flat area with wide pavements and is one of the best cities in Ireland for mobility. Most trains and buses under the transport operator Translink are accessible or their stock meet accessibility standards, such as handrails, non-slip surfaces, ramps, dedicated wheelchair users’ spaces and high visibility, though some exceptions apply. Where routes are accessible they will be listed on the timetables. For Ulsterbus, Goldline and CitySightseeing services accessibility varies on vehicles, so best to enquire ahead of your journey. Guide dogs are welcome on all services, likewise taxis. Most taxis that operate from ranks in Belfast city center are accessible vehicles, however, when booking via phone or app for collection it’s worth specifying that an accessible vehicle is required.

Glide Around Town: Why the Belfast Glider is our favorite way to travel around the city

Mimicking a light tram system but with articulated buses, the Glider has been a relatively recent but really welcome addition to the city’s transport network since 2018. Connecting east-west with just two routes so far (G1, G2) extensions both northwards and southwards are in the planning stages already. We really like how it connects many of the most-visited parts of the city, from Lanyon Place to Titanic Quarter, and City Hall to Stormont. The frequency is good, the stock is modern in style with air conditioning, WiFi, USB charging and the routes run generally from 5am until 11pm most days.