How Much Money Do You Need To Take Over The Tube Map For A Year? 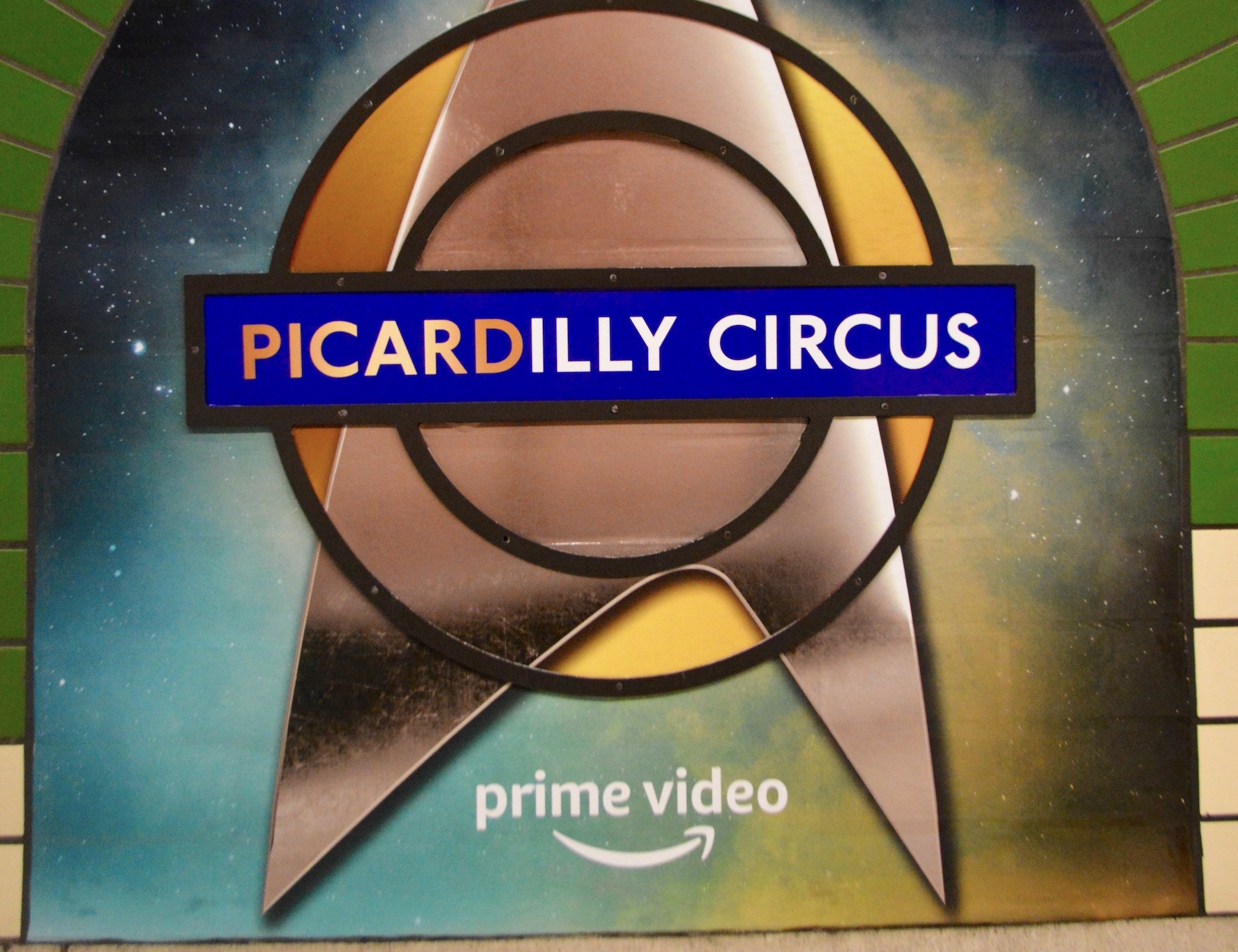 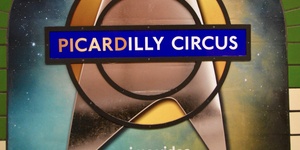 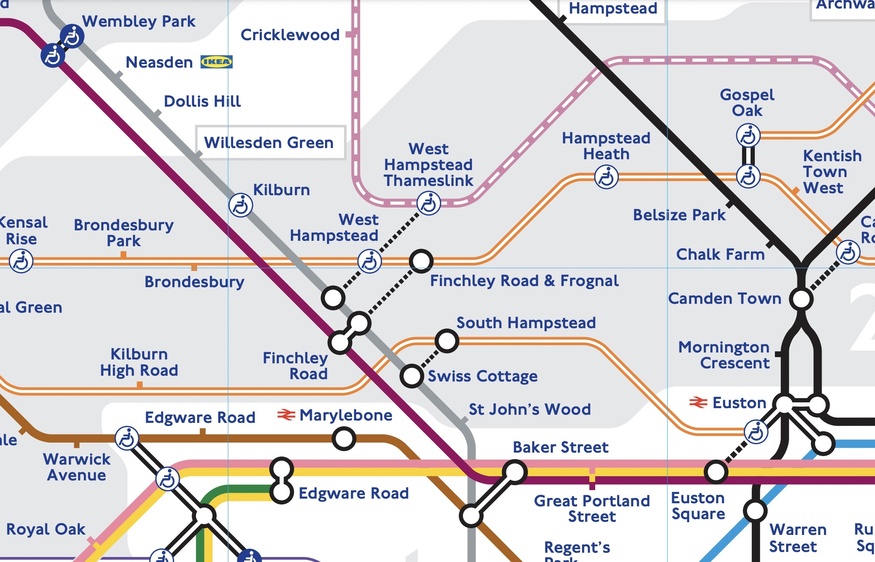 IKEA stores currently appear on the tube map, but where is this sponsorship model going? Image: TfL

As part of a deal with Transport for London, IKEA got to stamp its logo directly onto the iconic Underground map, where it now appears alongside each of the four stations nearest a flat-pack dispensary.

Those branded maps, in turn, are to be distributed as 2,750 40-by-50 inch map posters to be displayed in stations, and on 10 million pocket tube maps.

When launched, the value of the deal wasn’t public: one speculative report guessed the contract might be worth £1.5m.

Since then, TfL has uploaded the contract to its website — IKEA agreed to pay £800,000 to the transport network for pride of place on the famous schematic.

Forget your dreams of a two-bed flat in Finsbury Park: would it not be more glamorous still to use that mortgage to fund your face festooning the tube map for a year?

£800,000 is a surprisingly low sum to tap what’s arguably the primest visual real estate in London. So, Londonist asked: what gives? 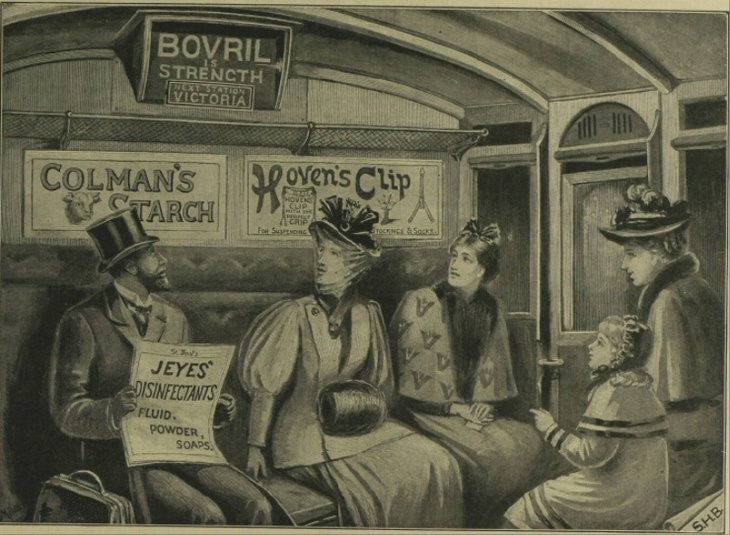 The Underground network and sponsorship go waaaay back.

Sponsorships have a long history on the Underground; even on Victorian trains, station indicators bore advertisements for brands like Bovril.

But taking a spin through the list of sponsorship contracts TfL provides on its website, it looks as though the transit operator is getting more imaginative with which of its assets it’s willing to offer brands.

Sticking logos next to stations is new, but this year wasn’t the first time IKEA has sponsored the tube map: an advert for the world’s preferred furniture stockist makes up the entire back page of one 2009 pocket map specimen in the London Transport Museum archives. And directory company Yellow Pages sponsored both the pocket and full poster maps at least three times between 1999 and 2004. The last company to sponsor the map was credit card company MBNA, paying £846,000 for the honour.

Despite the blockbuster £36m Emirates dropped to put its name on the London Cable Car, sums in the tens or hundreds or thousands of pounds per sponsorship have been the TfL norm for the past decade. In 2015, for example, Not On The High Street became the first brand to sponsor TfL’s Baby on Board badges — paying £420,000 toward the scheme over three years. Mothercare and Babyzen would reprise that sponsorship for three years from April 2019 to 2022, for more than £100,000.

In 2015 Buxton (of water fame) scored a coup, as far as UK transit system branding initiatives go — with the first ever commercial renaming of a tube stop. Canada Water became Buxton Water for a day during the London Marathon, earning TfL a cool £110,000. (Prior to that the renaming of stations had been contentious, with TfL resisting any such calls.) 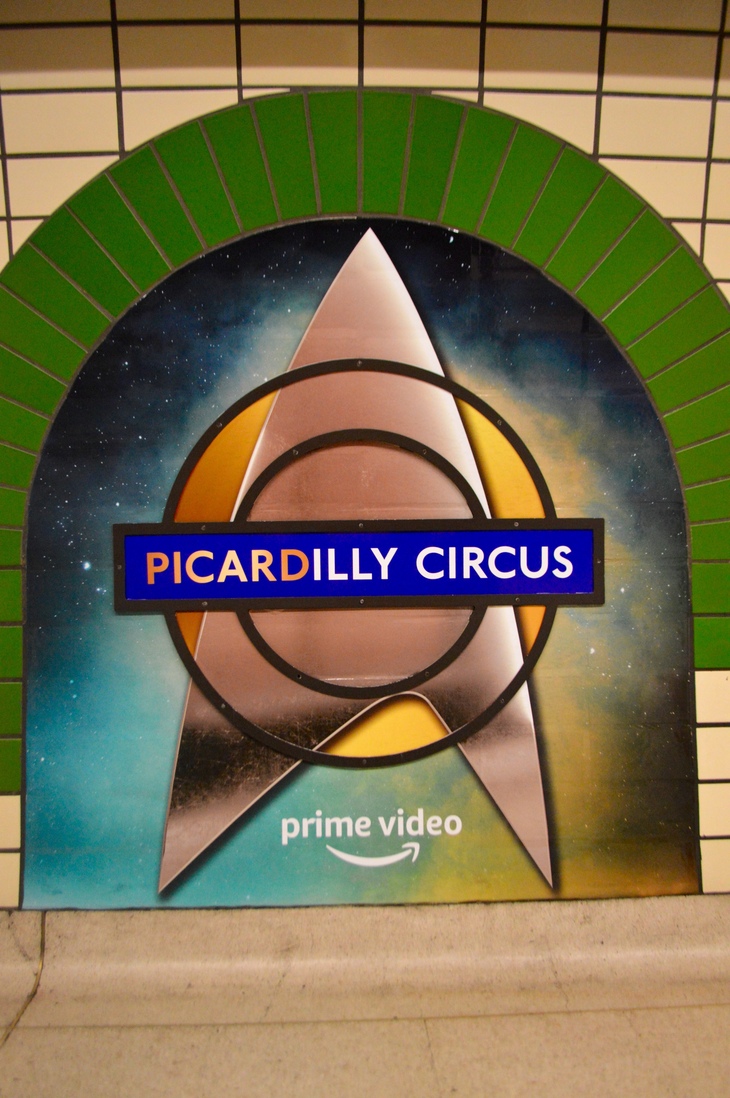 To boldly go where no sponsorship deal has gone before. Image: M@/Londonist

The next time a company would rename a station was 2017, when Amazon Web Services renamed Westminster Webminster for a little under a month. Giving us our first hint into the zany world of sponsorship pricings, this one cost the cloud computing business £390,000, despite covering a much longer period than Buxton’s — and surely being located on juicier London real estate. 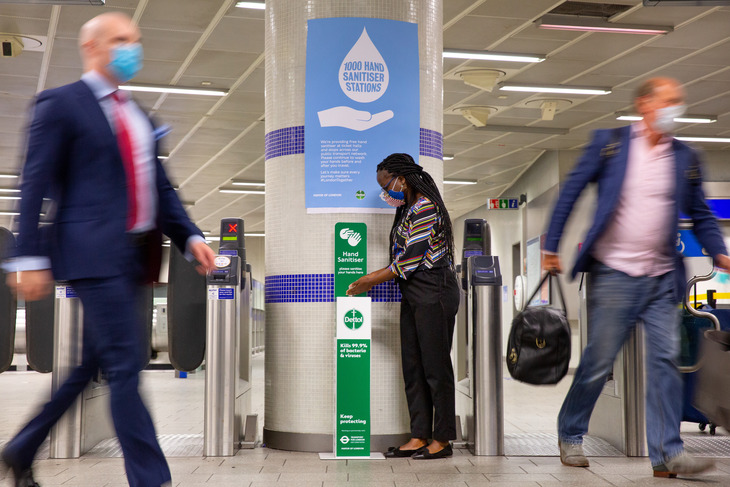 Dettol has splashed out £2,039,249 to distribute 1,300 hand sanitiser dispensers across the bus and rail network. Image: TfL

The two years preceding the pandemic, sponsorships started to boldly go where no sponsorship had gone before. Southgate was renamed Gareth Southgate Station for a couple of days in 2018, to welcome the England men’s football team back from the World Cup, costing sponsors Visa £80,000. Prada paid £85,000 to take over Marble Arch, Oxford Circus and Tottenham Court Road for six hours to launch a sportswear brand, featuring Willow Smith busking at the latter glamorous station. In January 2020 Amazon paid £250,000 to rename Piccadilly Circus Picard-illy Circus — Starfleet insignia and all.

Transit-related sponsorship deals died down while we were all locked in our homes, but when they returned they gifted a cash-strapped TfL with a much-needed bounty. Never mind £800,000 for the tube map: since September 2020, Dettol has splashed out £2,039,249 to distribute 1,300 hand sanitiser dispensers across the bus and rail network. (It provided the hand sanitiser liquid, too — while it’s unclear how much was actually supplied, Dettol has been contracted to stock the dispensers with more than 200,000 litres of the stuff.) 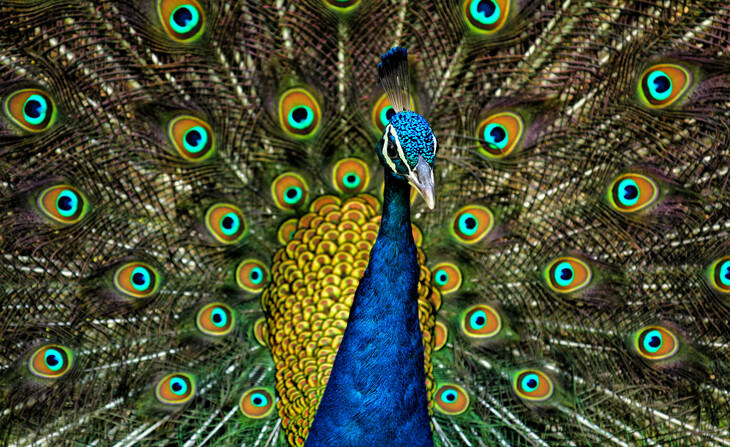 A factoid I often return to is that, despite their status as symbols of immense wealth, peacocks are cheap: they cost as little as £125 a pop.

Cheap is relative here, of course. An Indian blue peacock would be less expensive than the £250 my flatmate paid for her kitten, and little Twig the cat doesn’t bestow upon our home nearly as much kudos as would a large iridescent turkey. I accept, though, that purchasing peafowl in any circumstances might be considered by some an extravagance.

Like renting out the tube map, the surprisingly low price of a peacock is probably explained by there not being many people for whom that purchase is workable. If I bought one, I would find my limited flat space part taken up by a large, slow-strolling cushion that expands when it’s aroused. It’s a very good bit, but not a very good way to live. And while there are companies out there who could rent out the tube map — why would they?

Richard Busby, chief executive of consultancy BDS Sponsorship, says IKEA was one of few brands for whom the map takeover would work: “Which brands would TfL have accepted? Presumably not a retailer with say 50-100 outlets in London, as the map would have got very crowded.

“So I suspect their short list of possible sponsors was either very small or that IKEA’s agency went to TfL (and not the other way round) with an offer that, post-lockdown, was low but acceptable.” 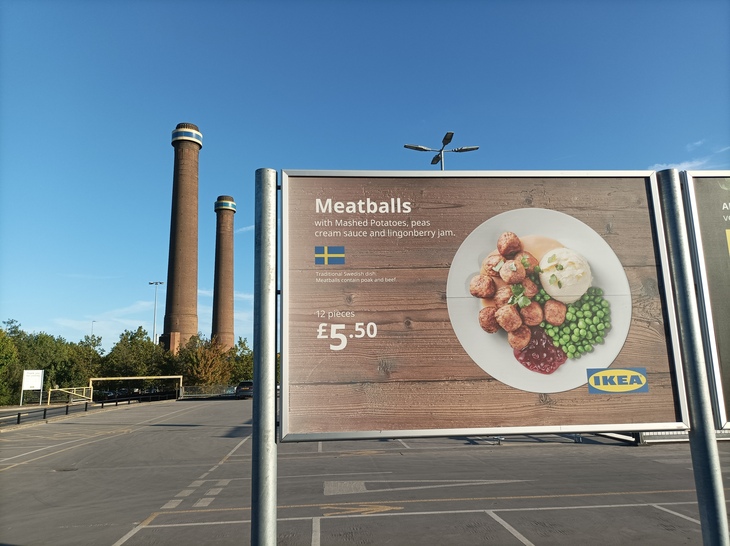 “The deal agreed between TfL and IKEA reflects good value for both parties in the current market,” says TfL. Image: Londonist

A spokesperson for TfL echoes that sentiment, noting to Londonist that Nielsen research indicates UK sponsorship investment declined 12% between 2014 and 2019 and a further 22% following Covid.

“The deal agreed between TfL and IKEA reflects good value for both parties in the current market,” they said. “We are proud to have collaborated with IKEA on the sponsorship of our instantly recognisable map. The revenue raised will be reinvested into our network helping us provide better journeys to the millions of people who use our services to get around the city.”

I also asked a contact who works in brand management for their take on the IKEA contract: “It’s interesting as really the only true cost TfL incur is updating the physical maps,” they tell me, “Would love to know, if there are 2,700 maps included, what percent of maps in the system that is — and where they are? Like on the trains, in the stations? I bet it’s way more than that, so is it a good deal?”

Arguably, they went on to suggest, TfL had done quite well out of the deal:

“So for one baby brand [with whom they worked] in 2017, TfL wanted £250,000 to sponsor the Baby on Board badges and put our logo on the tube stops to show which had baby change facilities, on some physical maps and mainly the paper maps (which — if anyone used in 2017, I doubt they use now, so again, I question that value for IKEA!).” 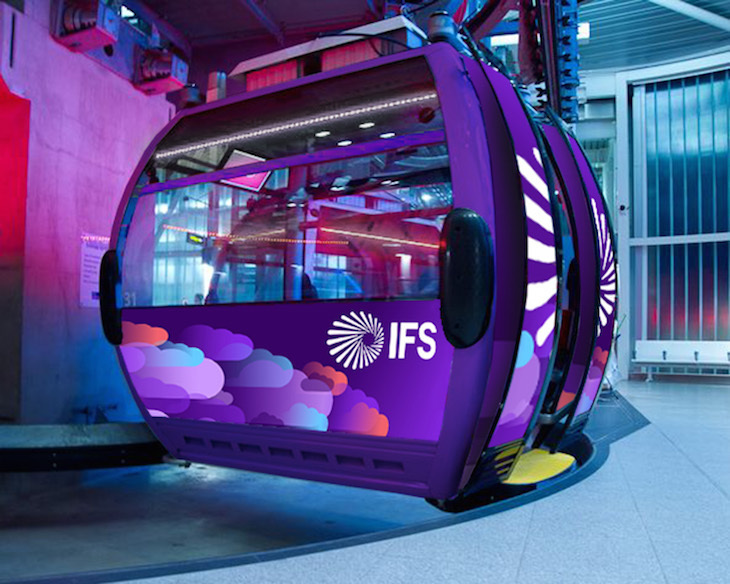 IFS paid a fraction of the cable car sponsorship that Emirates did. Image: TfL

The best example of that change is the rebranding of what had been the Emirates Air Line. In September, TfL announced it had finally found a new sponsor for the cable car — software firm IFS AB. But this wasn’t to be another £36m deal: the newcomer is contracted to pay between £840,000 and £2.1m, depending on how long it renews the agreement for, for the privilege of decorating the cable car. But before that was agreed, TfL managed to squeeze in another, shorter contract: a one-week Pokemon takeover of the dangleway for £200,000.

So what does the future hold? Since the pandemic kicked off, we’ve seen O2 splurge £400,000 to flood the Jubilee line with 4G, Sony hand over £280,000 to replace Oxford Circus’ roundels with Playstation symbols, and ITV pay £95,000 for a four-day takeover of the same station to promote Love Island.

To me, at least, TfL’s increasing openness and lowering costs means the tantalising prospect of individual Londoners renting out tube assets. Whoever is out there considering redeploying their savings from putting down a deposit to renaming Cockfosters after themselves for a year: you have my full support.