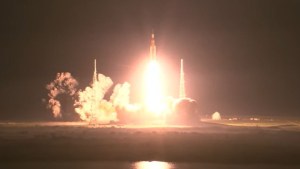 NASA’s Artemis 1 rocket blasted off from Cape Canaveral late Tuesday Pacific time on a landmark 25-day test mission to prepare for astronauts to return to the moon.

The giant rocket — more powerful than the Apollo-era Saturn 5 — roared to life at 10:47 p.m. powered by four engines originally designed for the Space Shuttle and two solid boosters.

After reaching Earth orbit at 10:56 p.m., the rocket’s second-stage was set to power the Orion crew capsule on to the moon, where it will spend two weeks in orbit.

The Orion capsule will return to Earth on Dec. 11, splashing down in the Pacific Ocean off San Diego where it will be recovered by a Navy amphibious ship.

“Artemis I will be the first in a series of increasingly complex missions to build a long-term human presence at the Moon for decades to come,” NASA said prior to the launch.

“The primary goals for Artemis I are to demonstrate Orion’s systems in a spaceflight environment and ensure a safe re-entry, descent, splashdown, and recovery prior to the first flight with crew on Artemis II.”