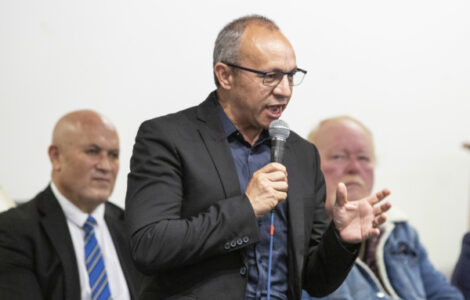 Craig Lord is standing to become Auckland’s next mayor because he wants to make the bad things about the city good and the good things even better.

The former engineer works as a freelance media operator and he’s also an events master of ceremonies and marriage celebrant.

He previously stood for the mayoralty in 2019, finishing third behind the winner, Phil Goff, and runner-up John Tamihere.

Lord says the feedback his campaign is getting from the public in this year’s local elections is “extremely positive and encouraging”.

He’s standing because he genuinely wants to implement the ideas he has for Auckland.

“I really believe in the things I’m standing on.”

Lord has strong views on the controversial issue of the potential sale by Auckland Council of local public reserves.

He says he disagrees with it and “selling the family jewels is the wrong methodology”.

“I’d prefer we focus on where the money is haemorrhaging,” he says.

“I think selling things is the easy and quick way out and it’s lazy and the wrong thing to do.”

Among Lord’s key policies is to return the council to its job as a “core services provider”.

“People think there are too many side projects and a lack of focus on core services,” he says.

“They’ve have asked me questions like what am I going to do about crime.

“I’m very clear that is not a council role. That is central Government’s job.”

He also wants to overhaul the council’s preferred contactor procurement system, which it uses to allocate work required around the city.

His desire to fix it stems from being told about council work that was done poorly or was overpriced, he says.

“That to me is a red flag and makes me wonder why we’re paying so much for projects.

“During Covid, buying local was promoted and I think we should be taking it a step further and using local contractors.

“We need to change the system to allow local contractors in and we need to make sure they match the standard required.”

Lord wants to give more power to Auckland’s local boards to make decisions for their communities.

Many people he’s spoken to don’t know the boards exist or what they do, he says.

He wants to see board members do “pop-ups” where they’d be in an area for four hours a day once every two months so residents can talk to them about local issues.

“I think after six months of doing that the public will say they’re starting to learn who these people are and what their jobs are.”

Like other mayoral candidates he wants to bring council-controlled organisations, such as Auckland Transport (AT), under council control.

He also wants to create an independent performance auditor role to maintain oversight over council work and spending.

“They would be the ultimate watchdog and it’s never been done.

“The advantage of them being independent is they can go into any [council] department at any time.

“They’d have the power to go directly to the news media and the public and say what they’ve found in a council department, they put a suggestion forward, and nothing is happening.”

On how to reduce traffic congestion, Lord says he loves the idea of mass transport but he believes Auckland wasn’t designed for it.

He says there are three options to make it efficient.

“You’ve got to tunnel everywhere and have subways, which will never happen.

“Or you do a scorched-Earth policy and remove a lot of properties and buildings to redesign the transit lines, but I find it horrid when they have to do that.

“The third option is you’ve got to go above ground.

“For some reason when I mention going up a lot of people seem to go off the idea.

“They think of failed monorails, but I don’t.

“None of it is going to be cheap, whatever we do.”

Lord says east Auckland residents should consider giving him their mayoral vote because he genuinely wants to serve the city and its people.

Voting closes in the local elections at midday on October 8.

The post Ex-engineer seeking to be next mayor appeared first on Times.