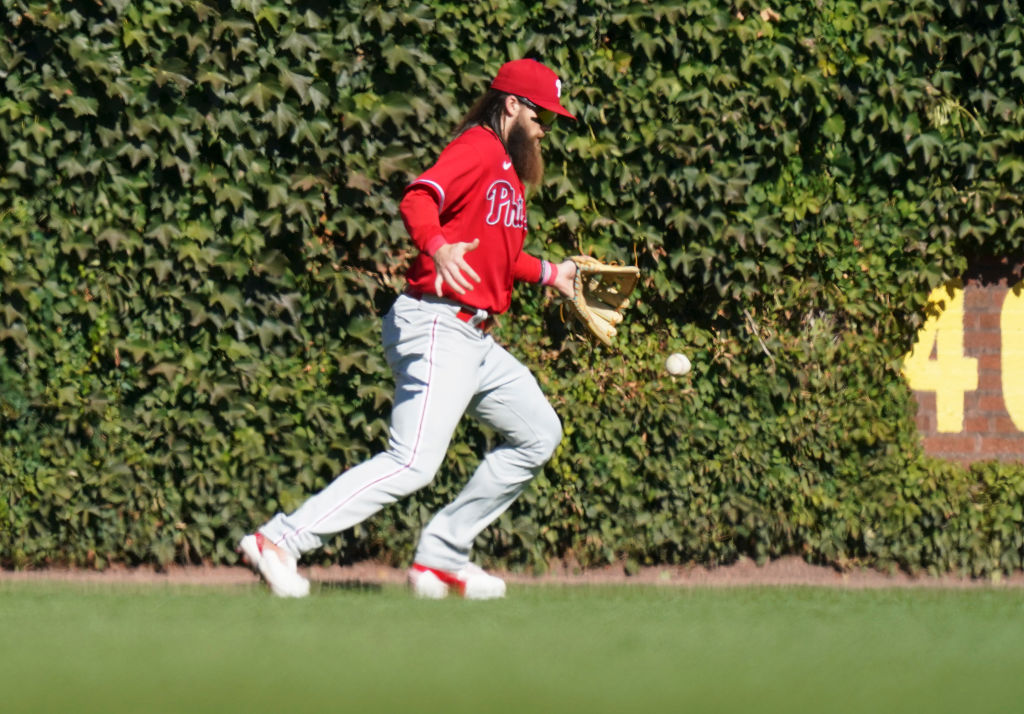 Not with the way it’s playing right now.

The Phillies completed three torturous days at Wrigley Field with another loss Thursday afternoon. The 2-0 defeat was the Phillies’ fifth in a row and it dropped them into a tie with Milwaukee for the final National League wild-card playoff spot.

The Brewers were set to play the Miami Marlins later Thursday. A Milwaukee win would knock the Phillies off the playoff grid and turn them into chasers with seven games to play in the regular season, rather incredible considering the Phils led the Brewers by 4½ games entering play on September 15.

The Cubs, despite being 16 games under .500, tormented the Phils this season, winning all six games between the two teams. The Cubs swept the Phils at Citizens Bank Park to open the second half of the season then pushed them toward the cliff these last three days. The Cubs won the last two behind a pair of rookie starting pitchers and some clutch bullpen work.

Offense was a major problem for the Phillies. They scored just three runs in the series and were 2 for 22 with runners in scoring position. They did not hit a home run. In fact, they had just two extra-base hits.

“I thought we’d swing the bats a little better than we did,” manager Rob Thomson said. “Especially with runners in scoring position.”

It’s tough to hit when you’re tight and these Phillies, who have not been to the postseason since 2011, are tight.

“I think we’re putting too much pressure on ourselves,” veteran second baseman Jean Segura said. “Thinking too much. When we get guys in scoring position, we’re trying to do too much, including myself. I feel like everybody here is trying so hard to get the job done and sometimes when you try too hard the result is not going to happen. We have to relax, enjoy the game, have fun — I know that’s hard when you’re losing.

“To be honest, it’s embarrassing.”

Rookie right-hander Javier Assad pitched five shutout innings for the Cubs, duplicating the work of rookie Hayden Wesneski from the night before.

Earlier in Thursday’s game, Jean Segura got picked off first base when there was confusion about the count. Segura thought Nick Maton had taken ball four when it was ball three.

“I just saw on the scoreboard, 3-1, and when I looked it was actually number 4 on the board so I thought it was ball four,” Segura said. “It was my mistake.”

Even the bat boy thought it was ball four. He ran out of the dugout to collect Maton’s bat after ball three. The bat boy got everybody confused, as well. Maybe he was Chico Ruiz’ nephew.

The Phillies now move on to Washington for the second-to-last series of the regular season. The Phils and Nationals will play a doubleheader Friday and single games Saturday and Sunday, weather permitting. Will the Nats be the Phillies’ salve? The Phils are 13-2 against them this season, but the way this team is playing, who knows. The Cubs just beat the Phillies’ three best starters. Bailey Falter and Noah Syndergaard, the back end of the Phillies’ rotation, will get the call in Friday’s crucial doubleheader.

The Phils are 10-14 in September, continuing a painful recent tradition.

Last season, they lost six of their final seven.

They haven’t had a winning September since 2017, four managers ago.

Are bad thoughts of Septembers past creeping into this team’s collective head?

“Not for me, personally,” Bryce Harper said. “I don’t think any guy on this team has that mindset of, ‘Oh, here we go again.’ Different group of guys. Different team. We’re ready to just get on with this series and get going into D.C. and play the best baseball we can.

“We need to be better in all facets of the game. I think our starting pitching has been great. Our hitting, we just haven’t been hitting on any cylinders right now. We’ve had guys on base. We just haven’t been able to cash them in. That needs to change, especially in the next couple of days.

“(Dave) Dombrowski put this team together to win games and to get into the playoffs. We need to do that. (John) Middleton’s done his job to put the best team on the field that he can. We need to show up and do our job.”