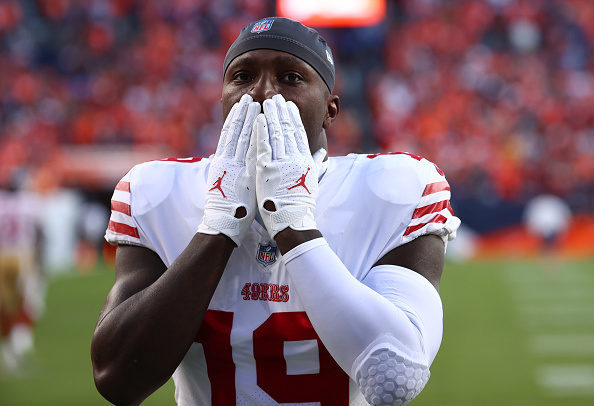 SAN FRANCISCO (KRON) — San Francisco 49ers wide receiver Deebo Samuel signed an endorsement deal with Jordan Brand, the company announced in a news release on Wednesday. Jordan did not disclose any details about the length or value of the deal.

The 49ers star tweeted on Wednesday morning a picture of the Jordan logo in reference to the news. Samuel tweeted the caption with one “prayer hands” emoji.

Samuel, 26, is coming off a breakout 2021 season in which he was named to his first Pro Bowl and was a first-team All-Pro selection. He recorded a combined 14 touchdowns (6 receiving, 8 rushing) and over 1,700 scrimmage yards.

“To me, it’s surreal and truly special to hear I’m joining the family,” Samuel said in a statement. “As a kid, all I wanted were J’s. Being a part of the Jordan Brand is something I’ve always wanted, and for it to be a reality is special to me. It’s a dream come true to be a Jordan Brand athlete and help carry this legacy forward to the next generation on and off the field.”

Jordan says Deebo’s signing is in line with the brand’s goal to grow its presence in American football.

During the past offseason, Samuel signed a three-year extension to keep the receiver in a 49ers uniform until 2025. Reports say $58 million will be guaranteed.

In three games this season, Samuel has caught 12 balls for 131 yards and rushed for 111 yards and one touchdown. The 49ers host defending Super Bowl champion Los Angeles Rams on Monday at Levi’s Stadium in Santa Clara.