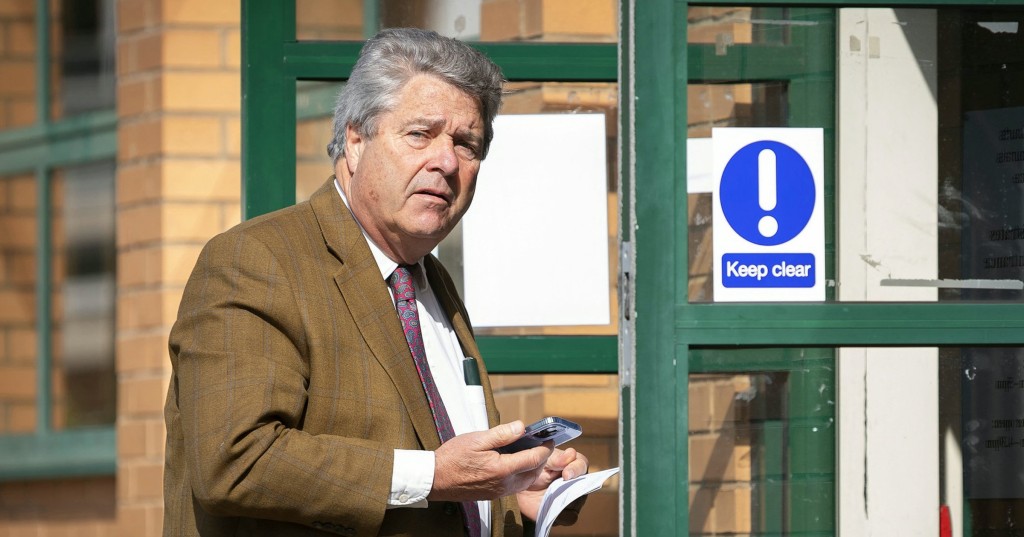 An Austrian count shot his wife’s dog dead and hid its body during a divorce row – before later claiming he was putting the dog out of its misery.

Earlier this year Count Konrad Goess-Saurau, 70, denied a charge of criminal damage on the grounds that it was reasonable to ‘destroy’ the animal to end his suffering.

On checking the CCTV footage, which showed her husband taking her dog, she contacted him.

She claimed his response was: ‘I have put the dog down, he is disgusting, nobody likes him.’

Upset by events, the countess – who has been married to the count for 26 years – phoned Wiltshire Police to report the incident.

She told the court: ‘We had a heated discussion in the morning because [Herman had] peed the day before.

‘I didn’t see it, but the dog had peed through the bannister on the landing onto the table below.’

Mr Worthington said the count admitted the shooting in a hand-written prepared statement handed to a police officer in an interview – but claimed the pet had cancer and was in agony.

‘I fully admit that I shot Herman, my gun dog,’ it read. ‘I shot him humanely and buried him with my gamekeeper.

‘I had to take the merciful route to end Herman’s suffering.’

The count also told police criminal proceedings over Herman’s death were motivated by a divorce and obtaining a larger settlement.

But the countess claimed Herman, who was purchased by her mum Brenda Williams for her 46th birthday, remained healthy and happy.

‘He came riding every morning with me, and in the afternoon, he was averaging 10 miles a day so he was very very fit,’ she said.

‘It was such an awful thing to do, the dog didn’t deserve to die and it was my dog, not his dog.

‘I adore my dogs. When their time comes, it is done so in a kind, calm and compassionate manner.

‘I think he had plenty of life left in him. He was just an old dog that was slowing down a bit.’

Mrs Goess-Saurau said previous family dogs had been taken to the vets to be euthanised at the end of their life, and were never shot.

Christopher Willis, who has been a farrier at Temple Farm since 2006, told the court: ‘All dogs love a farrier, so he was always pleased to see me.

‘I never looked at him and thought he was getting a bit doddery or anything.’

But when Count Goess-Saurau’s son Markus – from a previous marriage – took to the stand for the defence, he claimed Herman had deteriorated in old age and was ‘sore, stiff and limping’, adding that his body was covered in ‘cancerous lumps’.

Markus told the court: ‘There wasn’t a part of his body you could put your hand on where there wasn’t a bump.’

He was backed up by Temple Farm gamekeeper Phil Holborow, who said the dog ‘had lumps all over him and he was wobbly on his legs’.

‘He [the count] told me the dog crapped everywhere in the house, and said, “I think we need to deal with it.” He asked me to bury it, so that’s what I did.’

Summing up, Mr Worthington told the bench of three magistrates: ‘He wasn’t at the end of his life; he did not need to be taken out and shot.’

Mr Worthington added the use of a firearm, namely a rifle, to kill the animal in a ‘revenge attack’ was an aggravating feature.

Chair of the bench, Beverly Payne, returned a verdict of guilty.

‘We note the relationship was acrimonious and had been on that day,’ she said.

‘We are sure that you acted unreasonably, you could have organised taking Herman to a vet to be euthanised like all the other pets.

‘You must have known that would have upset your wife. Therefore we do find you guilty.’