Amtrak’s Oakland to Los Angeles train is slower than the 1930s, but just as beautiful 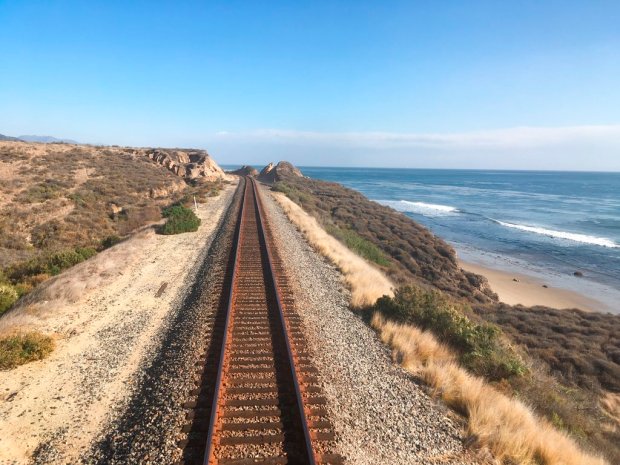 When Will Jones hops on his favorite form of travel – a long-distance Amtrak train – it’s not for speed or convenience. In a world obsessed with hyperconnectivity, he spends days at a time confined to a massive metal tube that is often beset by delays, lacks wifi, and is one of the 21st century’s slowest forms of motorized travel.

“When riding Amtrak I tell people just chill,” Jones said, as the Santa Ynez mountains passed by in the distance. “Because you will be exposed to America.”

Amtrak riders should take note of Jones’ leisurely approach to train riding in the United States. Its fleet of hulking diesel-powered locomotives are often slower than they were 85 years ago. On the Coast Starlight, an epic 1,377-mile journey from Seattle to Los Angeles, the Bay Area portion – connecting Oakland and San Jose to Los Angeles – takes over 12 hours. In 1938, the now-defunct Daylight train cruised down to Los Angeles in less than 10.

For the foreseeable future, California’s train riders are stuck with the lumbering connection. The state’s beleaguered high-speed rail project is decades behind schedule with hopes of eventually connecting San Francisco and Los Angeles through the Central Valley. And even as President Joe Biden, known for his love of Amtrak trains, funnels billions into passenger rail infrastructure, no major speed improvements are planned for the Coast Starlight – although the train’s dated snack bar menu was recently refreshed to mixed reviews.

Avid Coast Starlight riders say jumping on the $54 one-way trip from Oakland to LA is not about saving a few hours. It’s about finding a rare space where travelers from around the world come together and unplug from the hurried flow of everyday life.

“I don’t care much about speed,” said Nicolaos Zafiriou, a Greek filmmaker. On a weekday in July, Zafiriou went to bed in Oregon and woke in Sacramento. On a trip from Chicago to Seattle, he spent a night chit-chatting with a rock band manager and truck driver. “It’s so long that you don’t have to keep track of the time that passes.”

And the antiquated Coast Starlight, which has long been known for awe-inspiring views, is even generating buzz from a whole new generation of rail riders, who have been posting viral videos of the train’s vast route.

Highly recommend traveling on @Amtrak instead of flying once in a while!! We had such an amazing time, we’ll def do it again #amtrak #coaststarlight #bayarea #socal #vlogger #baytok